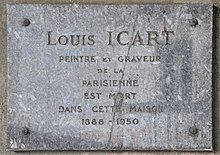 Louis Justin Laurent Icart was the first son of Jean and Elisabeth Icart. He started drawing at an early age. His aunt, who was impressed by his talent during a visit, brought him to Paris in 1907, where he devoted himself to painting, drawing and making numerous etchings.

In the studio in which he initially produced frivolous postcards with copies of existing pictures, he soon began designing his own work. He then received orders to design cover pages for the magazine La Critique Théâtrale . Fashion houses hired Icart to make fashion sketches, with which he soon became known. In 1913 he showed his pictures at the Salon des Humoristes . Icart then learned the technique of copperplate engraving and worked with this method from then on. He was now working for the large French design studios and illustrated their catalogs. In 1914 he met the eighteen-year-old "beautiful blonde" Fanny Volmers, an employee of the Paquin fashion house, whom he later married and who was the model for many of his works.

Icart took part in the First World War as a fighter pilot . During this time he made countless sketches and etchings with patriotic themes. After his return he made prints of his work, mostly using aquatint and drypoint etching . Because of the great demand, he often released two versions, one for the European and another for the American market.

In 1920 he exhibited at the Simonson Gallery in Paris, where he received mixed reviews. In 1922 Louis Icart traveled with Fanny to his first American exhibition in New York City , which was first shown in the Belmaison Gallery in John Wanamaker's department store and later moved on to Wanakamers in Philadelphia . He received mixed reviews for the fifty oil paintings he showed.

In the late 1920s, Icart was very successful both artistically and financially with his publications and work for large fashion and design studios. The popularity of his etchings reached its peak during the Art Deco period . Icart portrayed life in Paris and New York in the 1920s and 1930s in his own style of painting. In 1930 his success enabled him to purchase a magnificent house on the Montmartre hill in the north of Paris. In 1932 Icart showed a collection of paintings in New York's Metropolitan Galleries entitled Les Visions Blanches , which, however, received little attention because he did not personally accompany the exhibition.

After the German campaign in the west , Icart turned to more serious issues. With L'Exode ( German  Der Exodus ) he created a series of works that document the horrors of the occupation of France in World War II from 1940 from his point of view. Icart had to flee Paris during this time, leaving behind some of these works, which were only rediscovered in the attic of a Paris art academy along with some of his earlier works in the 1970s.

Icart's painting style was based on the French masters of the 18th century such as Jean-Antoine Watteau , François Boucher and Jean-Honoré Fragonard . His drawings were influenced by Edgar Degas and Claude Monet ; his rare watercolors bore features of the symbolists Odilon Redon and Gustave Moreau . Many of his early atmospheric paintings are in shades of brown, gold, and red; however, as his career progressed, his images became brighter.

Icart did over 500 engravings and illustrated more than 30 books. His works had titles such as: