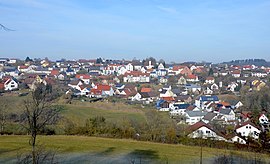 Moravia from the south-east

Mähringen is a district of Ulm in the northwest of the city. Ulm itself is located in the east of Baden-Württemberg on the Danube .

In the north, Mähringen borders on Dornstadt and its district of Bollingen , in the east on the Ulm district of Lehr , in the west and southwest on Blaustein and in the south you can see Ulm University with its Science Park on Eselsberg in the south .

Mähringen was first mentioned in a document in 1272 as "Moringen". Before the High Middle Ages, Reichenau Monastery held the rulership rights. Up until the late Middle Ages, the settlement was ruled by various local noble families. After the Reichenau monastery had sold the rulership rights to the imperial city of Ulm in 1446, the city exercised suzerainty and jurisdiction. Mähringen later became part of the Bermaringen district . On February 1, 1972, Mähringen was incorporated into a district of Ulm .

Like all districts that were incorporated from 1971, Mähringen also has a local council . Mähringen and Lehr have a joint full-time mayor. The committee has an advisory function in the city council on matters relating to the district. However, final decisions are made by the city council of Ulm as a whole.

The former coat of arms shows six golden ears of barley in green on a golden three-mountain.

The local museum in Mähringen was opened in 1978 by the Swabian Alb Association. In the museum you can see agricultural tools, furniture and other devices that “our grandparents and great-grandparents used”.

The Protestant parish church of St. Maria Peter and Paul