This article deals with the place Dornstadt in Baden-Württemberg; for the district of the same name from Auhausen see Dornstadt (Auhausen) . Dornstadt is also the German name of the Romanian city of Teiuș in Transylvania.

Dornstadt is a municipality in the Alb-Donau district in the German state of Baden-Württemberg ( Germany ). It is eight kilometers north of Ulm . 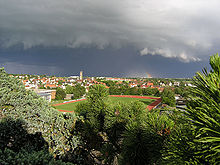 The place was first mentioned in a document in 1225. The common year number 1209 is not confirmed by the Baden-Württemberg State Archives. Until 1465 Dornstadt belonged to the property of the Lorch Monastery and then passed into the possession of the Elchingen Monastery and was subordinate to the Tomerdingen Care Office. On the church side, Dornstadt belonged to the Tormerdinger parish Mariä-Himmelfahrt until 1674 and was then raised to an independent parish. As part of the Reichsdeputationshauptschluss in 1803, the Elchingen monastery lost its land. Dornstadt became temporarily Bavarian until it finally fell to the Kingdom of Württemberg through the border treaty between Bavaria and Württemberg in 1810 and was subordinated to the Blaubeuren Oberamt .

Today Dornstadt itself is the largest suburb of the entire municipality with around 4400 inhabitants.

These are population numbers according to the respective territorial status. The numbers are census results (¹) or official updates from the Baden-Württemberg State Statistical Office (only main residences ). 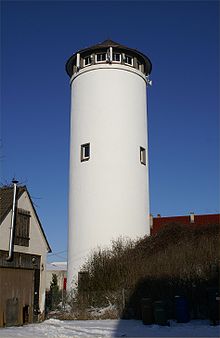 The water tower in Scharenstetten 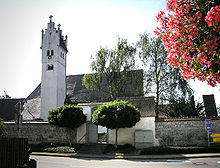 The 14th century frescoes in the choir area were laid down during renovation work in 1958. The pictures of the apostles by the Tomerdingen baroque painter Josef Wannenmacher came to the church in 1767. The altar of the church, which comes from the school of Hans Multscher and was built around 1450, is of particular importance . During the iconoclasm, it was moved from the Ulm Minster , where it originally stood, to an Ulm magazine. In 1760 it was installed in the Laurentius Church because the existing Scharenstetter altar was not in good condition and the Scharenstetter bailiff at the time had asked the Ulm parish church building office for an old altar.

Dornstadt has maintained a partnership with the French Coutras in the Gironde department of the Nouvelle-Aquitaine region since 1989 .

The districts of Scharenstetten, Tomerdingen and Temmenhausen are on the Franconian-Swabian Way of St. James , a pilgrimage route that leads to Ulm and on to Spain.

Dornstadt has set up a 40  hectare industrial area called Himmelweiler, an expansion area for companies in the Ulm / Neu-Ulm region . There is also a container terminal , which was opened in November 2005. The favorable traffic situation makes Dornstadt attractive for many companies.

According to information from Deutsche Bahn from March 2016, the station, which is designed for 100,000 handling operations per year, is being operated close to its performance limit. Planning for an expansion of the terminal to the west of the existing facility was in the early stages.

The Shoe House Werdich GmbH & Co. KG is one of 45 specialty shops on the 20 largest retail chains in the German shoe retail trade.

The Medical Regiment 3 of the Bundeswehr 's Rommel barracks stationed on the Lerchenfeld. During the Second World War there was also the Ulm-Dornstadt Air Base here .

Personalities who are connected with Dornstadt

Cities and municipalities in the Alb-Donau district