This article describes the church in Germany. For the village in the Polish Lower Silesian Voivodeship, see Kościelnik .

Holzkirch is a small municipality in the Alb-Donau district in Baden-Württemberg , Germany . The community belongs to the Langenau community administration association.

Holzkirch is located on the southern edge of the Swabian Alb, north of the Lone Valley and north of Ulm .

Holzkirch was first mentioned in a document in 1362 and came into the possession of the Free Imperial City of Ulm in 1385 . When Ulm lost its status in 1803, the place came with Ulm to Bavaria . The border between Bavaria and Württemberg was finally determined in a treaty in 1810 and Holzkirch became part of Württemberg.

The municipality council in Holzkirch has eight members. In the local elections on May 26, 2019 , the local council was elected by majority vote. Majority voting takes place if no or only one nomination has been submitted. The applicants with the highest number of votes are then elected. The municipal council consists of the voluntary councilors and the mayor as chairman. The mayor is entitled to vote in the municipal council.

Paul Seybold was elected as the new mayor in 2010. He replaced Gerhard Lindner, who left office after 20 years. 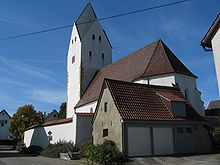 The late Romanesque defense tower of the Barbara Church from around 1150 offered the entire village population protection in troubled times. The very massive churchyard wall also served more as a defense.

Wikisource: Holzkirch in the description of the Oberamt Ulm from 1836  - sources and full texts

Cities and municipalities in the Alb-Donau district