This article treats the hat as headgear, for further meanings see hat (disambiguation) .

Before Christmas hat sales in Mecklenburg

A hat is a soft head covering made of fabric, wool, leather or fur. It is worn to protect against cold, wind and weather or for fashion, religious, social or professional reasons. A hat does not have a circumferential brim. The hat can take certain shapes, e.g. B. run towards the tip or tightly enclose the head. In addition, it can also be provided with a screen, neck protection and / or earmuffs. The hairstyle is partially or completely covered by wearing a hat.

The Arabic al mustaķah comes from the Middle Persian ( Pahlavi ) mustak and denotes a fur coat with long sleeves, preceded by the Arabic article name al . This gave rise to the Middle Latin word almutia , which meant the monks' hooded cloak . In Middle High German , the term almuz narrowed more and more to the hood and was finally shortened to hat . In the 15th and 16th centuries in Austria , mutz , muzen or mizli were the names for a range of soft, tight-fitting headgear or very short items of clothing that covered the head and shoulders.

The cap was originally also a coat, the capa or cappa , which was often provided with a hood, especially in Spain. As early as 1400, the name was also transferred to the hood. Except as a term for certain parts of the liturgical clothing or of official costumes, the term cap for a cloak has disappeared today.

In southern Germany and Austria, in addition to the communal German bonnet , "headgear made of wool or other soft materials that fit closely to the head" is referred to as a bonnet or, in a humiliating way, as a hat . In western Austria this headgear is also called a cap , in Switzerland as well, there in addition to a hat . 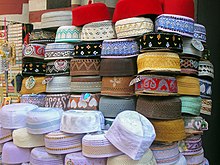