Matthias Ebner (* 1984 in Sindelfingen ) is a German industrial engineer and politician from Tiefenbronn . Since March 21, 2015, he has been one of several equal federal chairmen of the Animal Welfare Party . He has been state chairman of Baden-Württemberg since the beginning of 2014 .

Ebner is one of two sons of an entrepreneurial couple. In 2004 he graduated from high school . This was immediately followed by a degree in industrial engineering . During this time he spent a semester abroad in Indonesia from 2008 to 2009 . In 2009 he graduated with a degree in industrial engineering (FH) . Since then he has been working as a search engine optimizer . He has been married since 2019. 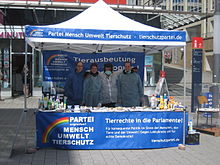 In 2010 Ebner joined the animal welfare party . Just two weeks later, at the request of the regional executive at the time, he became an assessor in the Baden-Württemberg regional association. From 2012 he acted as the second state chairman. In the 2013 federal elections , he ran for third place on the Baden-Württemberg state list of his party. He has been the first state chairman since 2014. From 2013 he was a member of the Federal Association as an assessor, and one year later he became Deputy General Secretary.

At the special party conference on March 21, 2015, which resulted from the resignation of several board members - including the two party chairmen Stefan Bernhard Eck and Barbara Nauheimer - at the turn of the year 2014/2015, he was elected alongside Horst Wester and Bettina Jung as one of three national chairmen with equal rights . A motion of no confidence was put to him at the party convention, but it was unsuccessful. He was confirmed in this office at the 35th Federal Party Congress, which took place in November of the same year in Düsseldorf , as well as two years later in December 2017 and November 2019 in Frankfurt. Within the party, he is also head of the federal working group on environmental and climate protection and a member of the federal working group MUT against the law .

In addition, he took part in the state elections in Baden-Württemberg in 2016 in the Stuttgart IV state electoral district and received a total of 728 votes, which corresponds to 1.2%. For the 2017 federal election he was the top candidate on the Baden-Württemberg state list of his party and was also elected as a candidate in the Stuttgart I constituency at the meeting of party members from Stuttgart on February 21 of the same year . As a constituency candidate, he received 1,576 votes and thus 1.0% of all first votes. In the course of the municipal elections in Baden-Württemberg in 2019 , he was his party's candidate in the municipal council election in Tiefenbronn, in which, however, he missed the entry.

In 2009 and 2010 Ebner was involved in a local Greenpeace group in Tübingen and in the anti-speciesist campaign in Tübingen . In 2010 and 2011 he was active with the Climate Pirates to fight against the construction of a coal-fired power plant . He has been vegan since 2010 , after having become increasingly critical of consumption during the previous six years. From 2011 to 2013 he was also responsible for the website tuebingen-vegan.de . Ebner is also a member of the Act for Animals association - Tübingen for animals until 2014 - of which he was chairman from 2012 to 2013. In 2018 he appeared in the animal rights film Citizen Animal - A Small Family's Quest for Animal Rights .