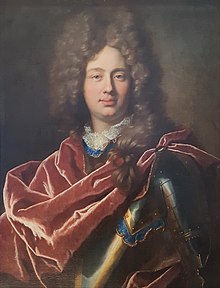 Family and loved ones 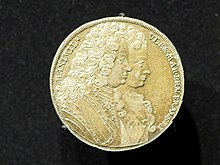 Maximilian Ulrich came from the Moravian line of the Kaunitz family and was the younger brother of Count Franz Karl von Kaunitz (1676–1717), canon in Olomouc and bishop of Laibach. Her parents were the Vice Chancellor of the Holy Roman Empire Dominik Andreas I. von Kaunitz , Freiherr von Sezima Austy and Maria Eleonora, died on December 2, 1706, daughter of Adolph Wratislaw Graf von Sternberg, Oberstburggraf zu Prague and Anna Lucia Slawate von Chlum and Koschumberg.

Maximilian Ulrich married Maria Ernestine Francisca von Rietberg , the heir to Count Ferdinand Maximilian von Ostfriesland and Rietberg and his wife Johanette Elisabeth Franziska, Countess von Manderscheid-Blankenheim , on August 6, 1699 . At the time of the marriage, Kaunitz was twenty and his wife only thirteen. This connection brought the County of Rietberg and claims to possessions in East Friesland to the von Kaunitz-Rietberg family. Through a name and coat of arms association, Maximilian and his wife became the founders of the house of the Counts Kaunitz-Rietberg. Five daughters and eleven sons were born in the marriage. Under these:

The county of Rietberg was administered by guardians until the age of majority . After that, the Kaunitz-Rietberg couple would rule together. After long legal disputes with the King of Prussia as the legal successor to the county of East Friesland and Gundaker von Liechtenstein , who as the husband of Agnes von Rietberg laid claim to Rietberg, his wife's inheritance claim could be enforced. In the case of the County of Rietberg, the House of Liechtenstein was initially lent by the Landgrave of Hesse-Kassel .

Like some of his ancestors, Maximilian Ulrich von Kaunitz-Rietberg entered the imperial service of the Habsburgs . Kaunitz was appointed treasurer, was appointed Reichshofrat in 1706 , and in 1716 was envoy to various German courts and to the Franconian , Upper Rhine , Lower Rhine-Westphalian and Upper Saxon imperial circles . He was appointed imperial privy councilor in 1720 and was ambassador to the papal court in Rome in 1721.

Since 1718, when he was recognized as an Imperial Count, he had a seat and vote in the Lower Rhine-Westphalian Imperial Count's College . Since Kaunitz lived with his family in Austria or Moravia, the County of Rietberg was administered by a general representative.

From 1720 until his death Count Kaunitz-Rietberg was governor in Moravia . Among other things, he tried to make the river March navigable. He was involved in the establishment of a corporate academy in Olomouc , in the construction of the Imperial Road between Brno and Olomouc, and in reforms of the tax system. The latter has led to an increase in the taxes of the subordinate population. He also expelled the gypsies and restricted the number of resident Jews in his manors .

As an imperial envoy, he took part in the conclave for the election of Pope Benedict XIII in 1724 . part.

In the county of Rietberg in 1743 he ordered the establishment of a new Roman Catholic parish with the name Kaunitz. Shortly before his death, the foundation stone for the parish church of St. Maria Immaculata was laid. Also in 1743, Maximilian Ulrich von Kaunitz-Rietberg founded a Latin school , which later became the Nepomucenum Rietberg high school . This was led by members of the Franciscan order . In 1746 he ordered the construction of a school building, which was only completed after his death.

For his services he was accepted into the Order of the Golden Fleece in 1744.