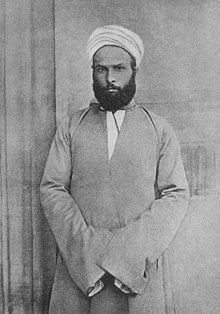 Muhammad Abduh at a young age

Muhammad Abduh , Egyptian-Arabic Mohamed Abdou ( Arabic محمد عبده Muḥammad ʿAbduh ; * 1849 in the Nile Delta ; † July 11, 1905 in Alexandria ), was an Egyptian journalist , religious and legal scholar whopursued pan-Islamic goals and was one of the most important representatives of the Islamic reform movement. From 1899 to 1905 he held the office of Grand Mufti of Egypt . His most important contribution to the Islamic reform movement was to convey the view of Islam as a rational religion that does not have to be in contradiction to modern developments such as science and technology.

Muhammad Abduh grew up in a farming family from Lower Egypt. Before he studied at al-Azhar University in Cairo in 1866 , he attended a secondary school and a madrasa , where he came into contact with the mystical teachings of the Sufis through his uncle Sheikh Darwish.

In 1870 he met Jamal ad-Din al-Afghani , who gave him a new perspective on the traditional teaching content. From him he took the point of view that Muslims at the present time have distanced themselves from true Islam and must therefore admit growing defeats towards the West. He was also introduced to European literature, philosophy , theology and sciences and learned through him to recognize technical and scientific progress in the West, while the Western way of life is to be rejected for the Islamic world. Stimulated by his teacher and by reading Western literature, Abduh's view of the current political and social problems in Egypt changed. It became his goal to lead Egypt into the modern age through higher education and properly lived religiosity.

In 1876 he completed his studies with the title of scholar and then taught - often as a private teacher - logic , theology , ethics and politics . In 1878 he became a history professor at the Dar al-ulum University (Arabic: "House of Sciences") and later professor of Arabic at another university. Abduh also worked as a journalist, wrote a. a. for the newspaper al-Ahrām , in which he called for educational reforms and for the learning of modern science and humanities.

In 1879 he went into exile for a short time , forced because of his resistance to a foreign government. A year later he was allowed to return and became editor of the official government newspaper , al-Waqāʾiʿ al-Miṣriyya . Under his leadership, the newspaper became the mouthpiece of reformist ideas, which also propagated the liberation of Muslims from European hegemony and the renewal of Islam on its own. At the same time he became a censor of all Egyptian media.

In 1882 he sided with the opposition in a nationalist uprising against the government and was forced to leave Egypt. Via Beirut he reached Paris in 1884 , where he met his old teacher Jamal ad-Din al-Afghani . Together they began to publish the reformist magazine al-ʿUrwa al-Wuthqā . In the magazine, which was immediately banned by British government officials in Egypt and India, both called on Muslims to unite under their religion against foreign rule and to find their way back to the true religion of the pious forefathers ( as-salaf as-salih ) . In 1884 ʿAbduh traveled to Tunis .

At the beginning of 1885 ʿAbduh returned to Beirut , where he initially gave private lectures on the life of the Prophet and the interpretation of the Koran. In late 1885 he was appointed teacher at the Sultānīya Madrasa. Here he translated al-Afghānīs writing against the Dahrīya and prepared a commentary on Nahdj al-Balāgha , a collection of speeches, letters and sayings by ʿAlī ibn Abī Tālib . In Beirut he also wrote his possibly most important work, the "Treatise on the Confession of Unity " ( Risālat al-tauḥīd ).

In 1889 ʿAbduh returned to Cairo . There he found a job as a Qādī . In 1897, together with the younger Syrian scholar Raschīd Ridā, he founded the magazine al-Manār (the lighthouse), which advocated overcoming the Madhhab antagonisms among Muslims and, like al-ʿUrwa al-wuthqā, developed an international reputation . In 1898, in this magazine, he brought up the idea of holding an all-Islamic congress in Mecca under the leadership of Amīr al-muʾminīn Abdülhamid II , which should have a branch in every country as a permanent institution.

The appointment as Grand Mufti of Egypt in 1899 was a great honor for Abduh. He held this office until his death in 1905. In his role as Grand Mufti, he also wrote a number of theological , legal and philological writings and also began work on a comprehensive commentary on the Koran , which was also published in a magazine. This comment sparked a storm of indignation and resentment from other scholars.

Throughout his life, Abduh advocated the synthesis of Western ideas and Muslim ideas. Although he is considered a modernist by many of today's Salafists , he promoted the idea of Salafiyya , i.e. H. the return to the exemplary way of life of the Islamic ancestors. He can therefore be seen as an important thinker in the Salafist movement itself. His theological thinking was characterized by the effort to prove the fundamental compatibility of revelation and reason.

Abduh continued the teaching of his tutor Jamal al-Din al-Afghanis , taking up his belief that Islam is not an obstacle to modern development, technology and science. Abduh was convinced that Islam even had the best prerequisites for modernity - traditionalists and orthodoxy, especially in the conservative al-Azhar University , in his view conveyed an outdated and sometimes wrong version of Islam. Throughout his life, Abduh therefore mainly campaigned for educational institutions in which a new religious view was to be taught, which could not be realized until his death.

He attributed the general weakness of the Muslims of his time to two problems: (1) ignorance of one's own religion or wrong belief; (2) Despotism of the Muslim rulers. In his opinion, these central problems could only be solved by a return to the “true religion” ( aṣl al-dīn al-islāmī ), above all through improved educational systems and a modernization of old interpretations of religious orthodoxy . He refused to accept the interpretations and consensus of previous generations of legal scholars as the only true interpretation of questions of faith, as well as the blind imitation of previous generations ( taqlid ). His critical attitude towards the blind belief in authority, however, came up against a limit when it came to the authority of the Koran. He said that in the event of contradictions between Koranic statements and non-Koranic histories, only the Koran should be believed.

He rejected some traditional prohibitions such as the wearing of European hats ("Transvaal Fatwa"), as did polygyny . Although he was liberal in many ways towards women, he did not want to give women political power.