The title of this article is ambiguous. Further meanings are listed under Meander (disambiguation) .

Meander with several oxbow branches on the lower reaches of the Nowitna River (Alaska, 2002)

Meander is the name of a river loop in a sequence of other river loops, as it naturally forms in unpaved flowing water sections with a very low bed slope and simultaneously transported, fine-grained debris . Corresponding river sections are called meandering rivers . Over time, meanders spread out laterally through erosion on the outside of the curve ( impact slope ) and sedimentation on the inside of the curve ( sliding slope ) until a breakthrough occurs at the ends of the loop. Then the meander becomes an oxbow lake and finally silts up .

The intensity of the meandering of a river depends on the nature of the subsoil and the flow speed . The ratio of water length to air line , known as sinuosity , serves as a simple measure .

The word meander comes from the Greek name Μαίανδρος Maiandros for now called Menderes bearing rivers in western Turkey ( Büyük Menderes River and Little meander , but the little meander wore in antiquity originally a different name). Already in antiquity these watercourses were known for their numerous river bends.

Hydrodynamics in a river loop; a helical flow results from cross flow and water flow 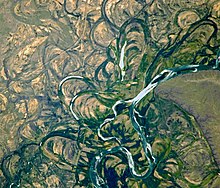 The Argentine Rio Negro with countless oxbow lakes as a remnant of past breakthroughs, photo from board the ISS

If two neighboring bends in the river touch each other, the river breaks through and flows through the abbreviation in the future. What remains is an arcuate oxbow (Engl. Oxbow lake ), which is no longer flowing through it.

As a rule, the difference in height creates a rapids at the breakthrough point , which is shifted upstream in a retrograde erosion. As a result, the river bed above lies correspondingly lower after a while. This river bed deepening does not affect the oxbow lake; in the standing water that sinks the contrary sediment to the ground, along with the falling leaves silted the standing backwater and on.

Broken valley meander with surrounding mountain and valley at the northern end of the Fish River Canyon , Namibia

Valley meanders are to be distinguished from the so-called free meanders of the alluvial plains. These are deeply cut, winding river valleys, which in their shape resemble the meanders of free flowing rivers. Various models are discussed for their creation. On the one hand, a river can cut deep into the mountains if the terrain is subsequently raised while maintaining the loop shape acquired in the flatlands. However, such forced meanders often change their shape afterwards, mostly they are more elongated. Just like the meanders themselves, the outer valley slopes (impact slopes) are undercut and steep by the river bed, while the inner valley slopes (sliding slopes) are more flat. Deviating from this model, in many cases the formation of valley meanders is discussed for those valleys in which a river has cut into almost flat hard rock. Here the meandering floors can only have been created as a result of the uplift, i.e. H. they do not go directly back to earlier river loops. Examples are the Middle Rhine or the Moselle arches . Loop formation under such conditions presupposes that the lateral (lateral) erosion of the river valley is high in relation to the deep erosion. Observations in East Asia indicate that the formation of valley meanders is promoted by relatively soft adjacent rocks, preferably in the presence of individual harder layers, and by climatic conditions with frequent heavy rain events. Extensive valley sediments, which protect the valley floor against erosion while the slope areas are exposed, can intensify the process, but not alone trigger it. When the loop of a valley meander breaks through, the erosion residue of the plateau surrounded by the valley section of the oxbow lake, the Umlauftal , is called the Umlaufberg . A special case of the dry valley can develop from the Umlauftal valley .

In the case of rivers in which national borders run, their valley path is usually used as a border line in border contracts , so that even the affiliation of river islands can be clearly regulated. Once a water course has been geodetically defined, changes in the course of the river can lead to the formation of areas that are still part of a regional unit, but are separated from it by the new course of the river and are therefore often difficult to access. Sometimes in these cases there is an exchange of territory; furthermore, such areas can also be used as nature reserves or retention areas .

Strongly meandering rivers such as the Mississippi or the Rhine have often been made navigable by river straightening. The straightening of the Rhine from Karlsruhe to Mannheim, initiated by Johann Gottfried Tulla between 1817 and 1819, was shortened from 135 kilometers to 86 kilometers. Such river straightening results in a lowering of the groundwater level and, due to the increased flow speed, greater erosion of the river bed, which means that there is a higher risk of flooding for subsequent river sections. The agricultural usability of the adjacent areas and the water supply of adjacent forest areas will be changed.

The physical forces of the Mississippi, which over time have led to superimposed meanders, are part of American folk mythology. A major study was conducted by geologist Harold Fisk in the 1940s. Fisk and a team of geologists and geographers examined the course of the Mississippi rivers - its main and tributaries, the dead branches and the dry riverbeds, as well as the alluvial land.

The negative effects of river engineering over the past decades led to the European Water Framework Directive , due to which the bank reinforcements of straightened rivers are being dismantled in some places. This is called renaturation , as a result of which meanders form again naturally in the flowing waters. Preference rehabilitated headwaters that not the shipping used, for example, the Nidda at Bad Vilbel or Main at Unterbrunn.

A single loop of the river in a river, such as the Saar loop , is not called a meander, nor is a loop of the river called a river bend with a markedly changed direction of flow. In the course of hydraulic engineering measures for the near-natural reconstruction of previously straightened rivers, this usage is often deviated from and every winding or winding river bed is called "meandering", even if the curves are fixed by paving and are not subject to the natural river bed dynamics.