Nuclear ship Otto Hahn in the port of Hamburg (1980) 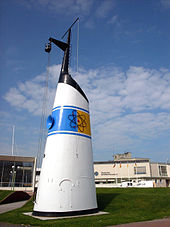 The cargo-carrying nuclear ship Otto Hahn was the third civilian ship to be powered by a nuclear reactor after the Soviet icebreaker Lenin and the American Savannah . The ship was named after the nuclear chemist and Nobel Prize winner Otto Hahn , who was personally present when the ship was launched in 1964. It was intended as a pilot project for the maritime use of nuclear energy , but remained the only German ship with a nuclear power drive , also popularly known as the "nuclear ship".

The start of the construction of the ship was made in 1960 by the Society for Nuclear Energy Utilization in Shipbuilding and Shipping ( GKSS ) in Geesthacht for a nuclear-powered merchant ship with the emphasis on the priority of research tasks. In 1961, German shipyards submitted proposals for a ship that could be suitable for the installation of such a propulsion system. A tanker was originally planned, but the GKSS had also requested alternatives. The choice fell on an ore freighter like the one offered by the Howaldtswerke in Kiel . At that time, the planned reactor was still a type with an organic moderator and coolant (OMR). In the course of 1962, however, this type was abandoned again, as technical difficulties had ruined its economic potential. On November 27, 1962, the shipyard construction contract was signed in the Hotel Atlantic in Hamburg . The management of the development and construction of the nuclear powered ship was entrusted to the German nuclear physicist Erich Bagge ( Kiel , Geesthacht). A year later, the drive could be determined from the offers of various reactor manufacturers.

The ship was built between 1963 and 1968 by Howaldtswerke AG in Kiel with construction costs of 56 million  DM , in which Euratom contributed 16 million DM. The work on the nuclear drive took up most of the construction time; the hull was christened in the summer of 1964 in the presence of its namesake. A pressurized water reactor from the manufacturer Interatom in Bensberg with water as cooling liquid and moderator in the primary circuit, which was built by Deutsche Babcock & Wilcox Dampfkessel-Werke AG in Friedrichsfeld (Lower Rhine) , served as the energy source . The drive steam for the conventional steam turbine was generated in the secondary circuit.

The reactor shields outside of the reactor pressure vessel have been simplified by the compact design of the advanced pressurized water reactor.

The nuclear powered ship completed its first test drive on October 11, 1968. The Otto Hahn was a research ship ; its use as a cargo ship was secondary. This also shows its unusual appearance with the bow-side bridge and the extensive rear-side superstructures, which in addition to the cabins for up to 36 researchers, a meeting room and two laboratories also included two salons as well as various trade fairs and reception rooms for representation purposes. The aim was to gain experience with this ship for future nuclear ship facilities, but at the same time to use it as an ore ship in quasi-commercial use. On March 18, 1977, the Society for Nuclear Energy Utilization in Shipbuilding and Shipping Ltd. (GKSS) in Geesthacht handed over the management and chartering of the ship to the shipping company Hapag-Lloyd in Hamburg. Since the Otto Hahn, as a reactor ship, was not allowed to call at foreign ports to the desired extent, the experiment was finally stopped in 1979. For the ship designs Nukleares Container-Schiff  80 (NCS-80) and (NCS 240) of the GKSS, Interatom and the Bremer Vulkan, created in the 1970s, despite promised state funding, there was no shipowner who wanted to commission such a ship himself.

By the time the nuclear drive was decommissioned, the ship had called at 33 ports in 22 countries. During its operating time, however, the Otto Hahn was mainly able to call at ports in South America and Africa, many of them only once with a special permit . A passage through the Suez or the Panama Canal was always denied. Internationally valid guidelines for the operators of nuclear energy ships never came into being despite numerous maritime law conferences in the 1960s.

From 1969 Heinrich Lehmann-Willenbrock was the captain of Otto Hahn . Ralf Matheisel led the ship from 1974 to 1979. The last voyage of the ship to Durban is described in the novel The Farewell by Lothar-Günther Buchheim . 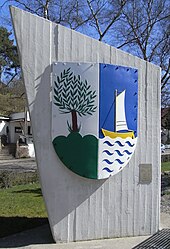 Decommissioning of the reactor

After a total of 650,000 nautical miles , the nuclear drive was shut down in 1979. The extensions took place in the port of Hamburg. The pressure vessel and the nuclear fuel rods were stored in the Helmholtz Center Geesthacht in 1981 .

In the summer of 2010, 52 nuclear fuel rods were transported from there to the Cadarache nuclear research center in the south of France . From there, the treated nuclear material was transferred in December 2010 to the interim storage facility north in Lubmin near Greifswald.

On November 16, 2016, the Helmholtz-Zentrum Geesthacht applied for, among other things, the dismantling of the reactor pressure vessel in accordance with Section 7 of the Atomic Energy Act.

Conversions and further use

The Otto Hahn was sold in the summer of 1982 to the Hamburg shipowner Harm Vellguth (Projex Reederei), who renamed the ship the Trophy and for 4 million DM by November 1983 at the Bremerhaven-based Rickmers shipyard to a container ship with a diesel drive and three 35 tonnes - had cranes rebuilt. The stern superstructures were removed, and in their place the bridge originally located amidships was put in place, which radically changed the appearance of the ship. Under the names Norasia Susan (from 1983), Norasia Helga (from 1985), Carmen (from 1985), the ship sailed for Projex until 1988. The freighter changed ownership of the Chinese shipping company COSCO from 1989 to 1998 as Hua Kang He . After that, the ship was converted into a multi-purpose freighter for new Greek owners and remained in service as Anais , Tal and Madre until 2009 under the Liberian flag .

After several weeks lay in Abu Dhabi , the ship was sold to Bangladesh for demolition at the end of 2009 by its last shipping company, the Greek Alon Maritime Corporation, for 2.45 million US dollars .

Remaining components of the ship

The former coat of arms of Otto Hahn can be found today on a meadow behind the outdoor pool in Geesthacht. The ship's bell is located at the Helmholtz Center Geesthacht - Center for Materials and Coastal Research , formerly the Society for Nuclear Energy Utilization in Shipbuilding and Shipping mbH (GKSS), in the archive. The chimney, which had more of a decorative function, is on the outdoor area of ​​the German Maritime Museum in Bremerhaven. It was only needed when using the auxiliary machines. Otto Hahn's reactor and machine control center is also in the collection of the German Maritime Museum.