Paretz is a district with around 400 inhabitants in the town of Ketzin / Havel in the Havelland district in Brandenburg , about 40 km west of Berlin (city center). Paretz gained supraregional importance when it became the summer residence of King Friedrich Wilhelm III around 1800 with the Paretz Castle , Castle Park and village renewal . was redesigned by Prussia and his wife, Queen Luise .

History of the village

Excavations show that this part of the Havel lowlands was inhabited since the Stone Age. The place name Paretz goes back to the Slavic po-reka (German: on the river, on the swamp). The place was first mentioned on May 28, 1197. At that time there were even two villages of the same name in close proximity. At first Wendish Slavs settled here as fishermen, later farmers of German origin followed. In a church document from 1297, only one village Paretz is mentioned. From around 1350 it belonged alternately to the von Diericke and von Arnim families, and from 1658 to the von Blumenthal family .

In 1797, the then Crown Prince , later King Friedrich Wilhelm III. the place for 85,000 Prussian thalers . In September of the same year, the Crown Prince and his wife stayed in Paretz for the first time for a few weeks, and also in the following years up to late summer 1805. After the Napoleonic Wars and after the Queen was again in Paretz for a day in the year of her death in 1810 the king resumed the old custom in 1815 and kept it until 1839; he died in 1840. After that, the place lost its importance again.

Since 1910 - Queen Luise had died 100 years earlier - public interest in Paretz gradually developed again. Theodor Fontane played an important part in this ; after three visits in 1861, 1869 and 1870, he described the place and its royal summer guests with great sympathy during their walks through the Mark Brandenburg . The number of visitors increased significantly in the 1920s and 1930s in particular. The Second World War passed Paretz without major changes, but the end of the war was a turning point with lasting consequences.

After the end of the fighting in May 1945 Paretz was in the Soviet occupation zone , later the GDR . For a long time, no will to preserve the cultural evidence of the Prussian state was evident; rather, there were clear signs that their loss was politically welcome. It was not until the 1970s that approaches to monument conservation behavior developed. Parts of the castle park were restored with the help of voluntary work, and the village church was reconstructed in the 1980s . The German reunification in 1990 brought improvements to the long-neglected infrastructure (telephone, natural gas connection, etc.). The “Verein Historisches Paretz”, founded in 1990, set itself the goal of restoring the historic townscape.

Paretz was incorporated into Ketzin on January 1, 1960.

Soon after the accession to the throne, Friedrich Wilhelm III. commissioned the architect David Gilly to build the planned model village. The old cottages were demolished and rebuilt at the king's expense. This is how one of the few not only conceived, but also fully executed projects of this type arose around 1800 in Germany. In the so-called "Paretzer sketchbook" the new building are basic and elevations, facades and gable views represented.

The new village consisted of about ten farms , which were largely uniform. The last two farmsteads in the direction of the Havel were an exception, as they were given a somewhat richer interior as the village exit, for example an elaborate fence to the street with a wide gate, flanked by stone pillars decorated with four putti - three of them disappeared afterwards 1945. When the farms were rebuilt, it was stipulated that the parlor in the gable of each house had to be reserved for royal servants, and sufficient space was to be kept free for the stately horses in the stables.

A whole series of buildings with special tasks were added to the basic rural equipment. The office building was - after the castle - the most representative building of the place, intended for the leaseholder of the royal property, who also had the function of the royal bailiff . Also highlighted here by a canopy with four wooden pillars: the house of the village mayor . The bulk floor (with arched entrances for the grain carts), the syringe house (for the fire sprayer ), the ladder showers (the fire brigade ladders hung there and the fire hoses were hung up to dry) and the flour scale served various practical purposes . An apartment building provided space for the apartments of line weavers, fishermen, millers, day laborers , teachers and for the school rooms; This house differed from the normal houses in that it had a middle section that differed in color, window shape and special plaster. Two small gatehouses to the right and left of the street marked the entrance to the town to the east; one mainly contained a sheepfold, the other the shepherd's apartment . A special feature was the Gothic House , a visual attraction on the edge of the church garden based on the pattern of English staffage buildings - once a royal blacksmith, around 1910 partly village blacksmith, partly restaurant, after 1918 just an inn and since 1938 a family-owned restaurant and beer garden.

Friedrich Wilhelm III. tried to ensure that the place remained as unchanged as possible in memory of his wife. On April 19, 1833, he issued a corresponding decree prohibiting changes to houses and the village street and was signed by all citizens and kossats in Paretz. Nevertheless, the village lost its originally uniform appearance as early as the 19th century. Different states of preservation could be found. Some things, like the Gothic House, were almost completely preserved, others fell into disuse and neglected. Buildings were rebuilt more or less true to the original after fires, numerous changes to the exterior plaster, roofs and windows distorted the overall impression, as did additional new buildings. After all, the first investigations in the 1970s revealed that a significant part of the original substance could still be found, so that efforts to restore it in accordance with the requirements of listed buildings could build on it. After the first beginnings in the GDR, an accelerated development began in 1989: in 1991/92 the flour scales, syringe house and ladder showers were restored, in 1993/1994 the two gatehouses, in 1996 the Planteurhaus - a house that existed before 1797 for the so-called Planteurs, with gardeners special tasks - and from 1999 to 2001 the castle itself.

When Friedrich Wilhelm acquired the Paretz estate, he was still crown prince and had been married to Luise von Mecklenburg-Strelitz for three years . In 1797, the Berlin architect David Gilly began building a simple, early classicist country palace on the site of the old manor house from the early 18th century, from which parts of the floor plan and the masonry have been preserved . The construction of the castle was part of a larger contract. A park was created in the vicinity of the castle.

The castle remained in the family until 1945. At the end of the war, the castle was looted and expropriated. From 1948 to around 1960, the “ Edwin Hoernle ” farming college used the historic buildings, later the “VVB ( Association of People's Own Companies ) Animal Breeding”, the highest administrative authority for animal breeding in the GDR. After the political change in 1989 , the building was temporarily used by the Potsdam University of Applied Sciences . In 1996/97 it was bought and reconstructed by the state of Brandenburg. 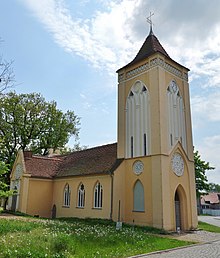 Right at the beginning of the construction work in the village, King Friedrich Wilhelm initiated a fundamental renovation of the Paretz village church (1797–1798), which became one of the earliest examples of neo-Gothic architecture in Germany.

Paretz holes in the ground 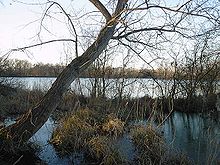 At the Paretz burrows

With the growth of the nearby city of Berlin (around 400,000 in 1850, around 1.6 million in 1890), the rich clay deposits in the vicinity of Ketzin gained great economic importance. By 1881, 15 efficient brick factories had been built there. Almost 100 million bricks were burned annually and most of them were transported to Berlin by ship. The boom began to decline in 1900 and collapsed completely in the 1920s. In 1946 the last brick factory had to be closed. Many of the "holes in the ground" that remained after the clay was quarried were filled in with the rubble of the largely destroyed city of Berlin after the Second World War - a special cycle of material. Others, such as the “Paretz Erdlöcher” - extended over approx. One kilometer in a north-south direction - are now filled with groundwater . Vegetation and animal world could develop unhindered, the "Paretz Erdlöcher" are part of the European bird sanctuary "Mittlere Havelniederung".

Fontane on the way to Paretz

Theodor Fontane described the route of the royal tour company to Paretz via the nearby village of Uetz :

“For a short time it seemed as if the quiet village should be drawn into the world from which it is otherwise isolated. [...] Around this time - the king always chose the waterway - Ütz became a much-mentioned ferry station. The fisherman who was on duty had his golden days [...] and along the village street, where the dung wagons had previously got stuck in rainy weather, the royal carriages now swayed. That was until 1810. In the 20s and 30s it flickered on again, then it went out completely. "

The hiker Fontane experienced the path as follows:

“It's a good half mile from Ütz to Paretz. A delightful walk on a summer afternoon. The path leads through meadows to the right and left; the smell of hay wafts over from the fields and in front of us a thin, sun-lit fog shows us the place where the broad, bay and lake-rich Havel flows. Paretz himself hides himself to the last. […] We have reached our goal: on the left the castle, an elongated, unadorned ground floor building with a low storey on top, on the right a group of old oaks and the Gothic church of the village on their side. They both greet each other across the street. "

Districts of the city of Ketzin / Havel