Paul Friedrich Ziller (born May 30, 1846 in Oberlößnitz ; † March 11, 1931 in Radebeul ) was a German neoclassical architect who designed for his eldest brother Ernst Ziller in Greece for about 25 years . He was the youngest brother of the Radebeul brothers Moritz and Gustav Ziller and, like them, came from a family of builders in Saxony .

Ziller was born as one of ten children of the Radebeul master builder Christian Gottlieb Ziller (1807–1873). After an apprenticeship as a stonemason from 1860–1862, he studied architecture , probably in Dresden .

After his military service in 1868 he went to his eldest brother Ernst Ziller in Athens , where he designed houses and interior furnishings as his assistant for the next 25 years.

In the mid-1890s (after May 1895) Ziller returned to Saxony and settled in Kötzschenbroda in 1897 , where he lived with his unmarried sister Pauline (1845-1937) at Dresdner Strasse 1 (presumably: Meißner Strasse 157). Since he is not listed in the list of all traders in the Lößnitz address books in 1897 and 1899 under the headings of builders or architects , it is assumed that he first worked in his brothers' construction company. In 1901 he briefly took over the management of the Ziller brothers' construction company for his older brothers Moritz and Gustav, who had died in the meantime, and after a short time passed them back to his sister-in-law Marie, Gustav's widow. Paul Ziller opened a construction office in Serkowitz in October 1901 at Rosenstrasse 8, from 1903 under the name “Bureau for Architecture, Construction and Repair Work”, which he advertised in the address book of his time (then at Rosenstrasse 20) in 1915.

In 1910, Ziller was awarded the Silver Cross of the Order of Savior for his services to the Greek state .

In 1907 he moved his business and apartment to Rosenstrasse 20, where he again spent the last years of his life in relative poverty with his sister Pauline. He was buried in the Radebeul-Ost cemetery. 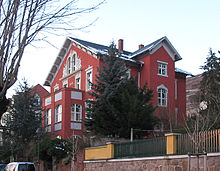 The buildings listed below are in the monument topography of the Federal Republic of Germany . Monuments in Saxony: City of Radebeul listed cultural monuments . They are therefore not a complete catalog of works .

Paul Ziller most important work on German soil is the tomb of Karl May in the cemetery Radebeul-Ost , which he in 1903 as a family burial place of the family May and Plöhn strongly inspired by the Athens Nike temple designed, also affected by the grave monument to Heinrich Schliemann his brother Ernst Ziller in Athens.