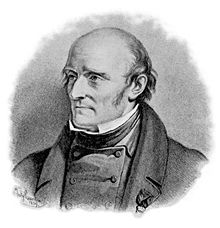 Pehr Henrik Ling (in older sources mostly Per Henrik Ling, in English sources also Peter Henry Ling ; born November 15, 1776 in Södra Ljunga ( Kronobergs län ); † May 3, 1839 in Stockholm ) was a Swedish poet and author as well as the founder of Swedish remedial gymnastics . Alongside Albert Hoffa and Johann Georg Mezger, he is considered the father of classic massage , which is why it is also called Swedish massage .

Ling was born in the village of Södra Ljunga in the province of Kronobergs län (historical province of Småland ) about 15 kilometers south of Ljungby . Four years after Ling's birth, his father, Lars Peter Ling, who was the pastor of Södra Ljunga, died. His mother, Hedvig Maria Molin, married the successor in office, but died shortly after this wedding.

He was sent to high school in nearby Växjö . A year is not known, nor is it known whether he attended another school before. In 1792, Ling was expelled from high school when he refused to name the leaders after a revolt by some students. The next proven station of Ling is Uppsala University , where he studied theology in 1793 . After four years he was able to complete this course on December 21, 1797 with a diploma. He decided to make a longer trip through Europe and left Sweden for Denmark in 1799 . His first stop was Copenhagen . After that he stayed in Germany , France and England . He acquired the languages ​​of the countries he traveled to and got to know the newly awakened "German gymnastics " in Germany . Some sources see in this encounter the foundation for his later work with Swedish gymnastics. The next record of Ling's life is from 1801, when he took part in the naval battle of Copenhagen as an officer .

Although Ling always had work on his travels, he was often penniless during these years. He later told friends that he took pride in being able to limit his living needs to the absolute minimum at any time. However, years of travel and poverty, sometimes without food or sleep, and service in the army left physical traces: his general physical condition deteriorated, he showed symptoms of rheumatism and even had paralysis .

In 1804, two French immigrants established a fencing school at the University of Copenhagen . Interested in this sport, Ling traveled to Denmark and became a student of the two French. He found that the regular fencing practice improved his health and that he was eventually fully rehabilitated. Since he had a special talent for this sport, he became a fencing master at the University of Lund a year later . There he taught fencing and the modern languages ​​that he had learned on his travels. In addition to his work as a lecturer, Ling gave lectures on Scandinavian mythology and dealt with the past of the Swedish people. He took courses in anatomy and physiology at the university to investigate the reasons for his recovery.

At this point in his life at the latest, he made the decision to make the Swedes worthy descendants of the old northerners. He wanted to achieve this goal with both gymnastics and poetry. Through his commitment as a poet and author of Nordic mythology, he got in touch with like-minded people. In the beginning they met for fun, later this group founded the Gotischen Bund ( Götiska Förbundet ) with the aim of giving the Swedes their pride and northern national feeling through poetry. Ling himself wrote some pieces, such as Asarne and Gylfe. The Swedish Academy ( Svenska Akademien ) appointed him in 1835 as the successor to the late Anders Fredrik Skjöldebrand (1757 to 1834). Ling got his seat (number 18) and, as stipulated by the statutes of the academy, remained a member until his death in 1839.

In 1812 he asked the Swedish government for funds to set up a gymnastic institute in Stockholm. The answer was as short as it was direct: "We already have enough jugglers and tightrope walkers without bothering the state treasury because of them." Ling concentrated on the further development of fencing and its gymnastics. His fame as a fencing teacher helped him make his gymnastic exercises known. Within a year his reputation in society had grown so much that the funds for the institute were approved for a renewed request. It was only a small amount of money, but Ling was able to found his Gymnastisches Zentralinstitut ( Gymnastiska Centralinstitutet ), GCI for short, in Stockholm in 1813 and became its head. Just a few months later, his gymnastic exercises were being used in many Swedish institutions, such as B. Schools, and introduced into the army. In 1818 the troops of the province of Skåne adopted a type of bayonet fencing that he had developed. These successes in state institutions enabled him to ask for more money for the GCI and to get it approved.

Ling was not without controversy, however. The orthodox doctors were skeptical of his work and wanted to recognize his gymnastics at most for prevention or as a treatment for "ailments". This attitude did not change until his death. Despite his controversial person, he was awarded awards such as the title of Swedish professor, the title of Knight of the North Star Order and he was elected a member of the Swedish Medical Society ( Sveriges läkarförbund ) . His students, on the other hand, showed him their appreciation in particular in the form of a silver medal given to him in 1821: On one side a portrait of Ling, on the other the inscription "To the highly celebrated Idrottmann from his friends and students"

Ling spent the following years improving his exercises at GCI. In 1836 his bayonet fencing was taken over by the Swedish infantry. He wrote other poems and the only three books that exist about his teachings from his pen. The largest and most important work, Gymnastikens allmänna grunder, was only published a year after his death by his students Liedbeck and Georgii. Ling died in Stockholm on May 3, 1839, after contracting liver tuberculosis a few months earlier .

“Ling's inner eye now presented itself in ever lighter splendor the image of a human race, reborn in agility, strength, physical and moral health and beauty; [...] "

- Hugo Rothstein: The gymnastics according to a system of the Swedish high school teacher PH Ling

Ling's mission statement was to strengthen the patriotic spirit and to renew the heroism of the ancestors. According to his students, Ling's great-grandfather was his greatest role model. He was over 100 years old and fathered 19 children. After he regained his physical strength through fencing, Ling wanted to make use of this knowledge of the Scandinavian people. Since his exercises were already to be used in youth, he is considered a reformer of youth education alongside FL Jahn , JCF GutsMuths and JH Pestalozzi . A few years before Ling began his systematic development of gymnastics, Franz Nachtegall made a name for himself in Denmark with gymnastics. Ling's theories are partly based on Nachtegall's physical exercises.

According to Ling's theory, life consists of the basic chemical form, the basic dynamic form and the basic mechanical form. If one of these forms of illness or ailments is afflicted, the respective therapy must be started. With the mechanical basic form, gymnastics was his therapy of choice. In his eyes, gymnastics was not primarily a healing method, but rather a preventive measure . For this purpose, Ling developed his system of gymnastics, which is based on four pillars and, if it is carried out consistently, should give people strength and fitness. The four pillars stand for different types of gymnastics, with their own exercises and their own focus on exercise, duration, accuracy and much more. The Medical gymnastics to strengthen the weak body of the patient and lift the common good. Exactly guided exercises are intended to teach discipline and obedience in educational gymnastics . The military gymnastics serves as preparation for the army, should strengthen the body and ensure an upright posture. The last pillar of aesthetic gymnastics was to make the movements of the body more elegant and thus bring about beauty. In Ling's sparse records, there are repeated references to hand movements that are very similar to massage. According to his teaching, however, these did not have the same meaning as they have in today's classical massage. But they served Albert Hoffa and Johann G. Mezger as the basis for the 5 massage movements that are common today .

In addition to the body, Ling also wanted to revive the spirit of the northerners in modern Scandinavia. His poems and epics with themes from Nordic fairy tales and stories tell of heroes and their lives. Asarne is z. B. an epic about the early days of the north. His literary works are no longer very widespread today, except in the Scandinavian area. 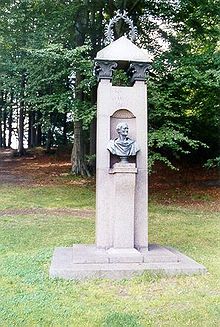 Bust of Ling in Gothenburg . Built by Hans Michelsen.

After Ling's death, his student, Professor Lars Gabriel Branting, took over the management of the GCI and carried on his ideas. The gymnastics developed in two different directions. One group of his students showed a moderate approach and understood gymnastics as part or complement of conventional medical treatment and prevention. The other group wanted to banish conventional medicine completely for many diseases and manifest gymnastics as the sole therapy.

In recognition of his services, a statue of a little girl doing Ling gymnastics is now in Stockholm near the former GCI, at the intersection of Hamngatan and Sveavägen . There is a bust of Ling in Gothenburg. The rectory where he spent his childhood has now been converted into a museum. Ling was given a special honor at the 1912 Summer Olympics in Stockholm, where his bust was depicted on the back of the medals .

It was only towards the end of his life that Ling published books on his teachings in gymnastics and fencing. All earlier works are poems and dramas about Nordic mythology, most of which were created in or in collaboration with Götiska Förbundet.