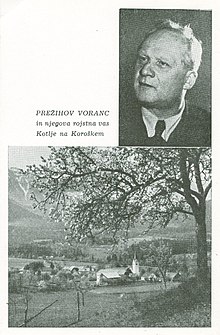 Lovro Kuhar, photo of his place of birth.

Prežihov Voranc is a pseudonym , it refers to the name of the house of his parents, so "Prežihov" is the vulgar name of the parental home and "Voranc" is the dialect form of the first name Lovro. His real name was Lovro Kuhar. He came from a small family and was the son of a so-called " chaste ", a small housekeeper.

Already in his youth he read a lot and continued to educate himself self-taught. He only attended a two-year elementary school and then worked as a forest worker. In 1912 he attended the cooperative school in Ljubljana and began to publish in various magazines. From January to April 1914 he took a course for the rural cooperative system in Vienna , mediated by the Christian-social Janez Evangelist Krek.

Raised in the spirit of the Slovenian People's Party, he joined the Socialist and later the Communist Party. During the First World War he deserted on the Italian front in 1916 , where he was interned, and did not return to Slovenia until 1919 .

He got a job in the office of the steel mill in Ravne. Here he worked intensively as an activist and party secretary of the Communist Party of Yugoslavia , for which he worked as a local councilor from 1926. After his party had been banned in Yugoslavia in 1929 , he initially organized illegal channels for the exchange of literature and contacts across the border into Austria as secretary for the Carinthia and Styria district .

In 1930 he left Yugoslavia and was sentenced to six years in prison in absentia. He turned over the border to Carinthia to relatives in Augsdorf, since 1850 part of the municipality of Velden am Wörthersee , where he stayed for half a year, and then worked in Vienna for the KPÖ and the Red Trade Union International. As a consultant for farmers' questions, he traveled to Scandinavia, Romania, Bulgaria and Greece.

In 1934 he witnessed the February fighting in Vienna and was jailed for several months as a suspect. After his release he went to Paris , where he also took the communist Slovenian newspaper Delo , of which he was editor-in-chief, with him (the newspaper had no direct reference to today's Delo , which was created in 1959).

In 1936 the party sent him back to Vienna, where he became organizational secretary of the Central Committee of the CPY. When he was supposed to organize a party conference in Prague , he was arrested and sentenced to three months in prison for possessing a false passport. He was then deported to Austria, where he was also arrested and spent a year in prison. Here, in the prison at Rossauer Lände , the novel Die Brandalm was written .

In August 1937 he returned to Paris, where he enjoyed the status of a political refugee and worked alongside Tito for the CPJ. His special task was the printing of party literature and the care of returning Spain fighters . But when he was wanted by the French military police in 1939, he returned illegally to Yugoslavia from exile in Paris .

There the party commissioned him to complete his literary works, which then appeared in 1939 and 1940. In 1940 he received a literary prize from the city of Ljubljana (Laibach) for this. In 1941, after the occupation of Yugoslavia by the German Reich and Italy, he began to become politically active again and joined the Slovenian Liberation Front, where he was particularly responsible for cultural work. In this position he was editor-in-chief of Radio Kričač, a station for the resistance movement, from November 1941 to April 1942, and wrote articles and brochures.

In 1943 he was arrested and imprisoned in Italy for his political activities. After Italy capitulated, he was transferred from Laibach to the Slovenian camp Begunje and from there to the German Reich, where he was taken to the Gestapo headquarters in Berlin . There, the Germans are said to have offered him the position of President of Slovenia.

Soon, however, he got into difficulties during the Stalinist era because he was suspected of collaboration (for example he opposed the ban on the Catholic Hermagoras brotherhood , which had published Slovenian literature, and against the acceptance of crosses from school classes); In addition, there were also private problems, so that he withdrew to his home region and mainly devoted himself to writing. He died at the age of 57, as his health had suffered from the frequent imprisonment.

Prežihov Voranc was one of the most important storytellers in Slovenia in the 20th century. In terms of style, it is assigned to social realism (not to be confused with the later propagandistic socialist realism). Despite his partisan commitment, his portrayal is truthful and devoid of ostensible tendencies.

Prežihov Voranc began writing short stories at an early age. His first were published in 1909 in the Klagenfurt Slovenian magazine Mir and in the Prague magazine Domači prijatelj , and he was celebrated as a young Gorky.

From the beginning he always wrote about his closer Slovenian homeland and the later Slovenian-Carinthian border region. When he published his first volume of short stories Povesti in 1925, still under his real name, it was unsuccessful. In the time of the New Objectivity there was little understanding for his psychological portrayal of local small farmers and agricultural workers.

Discouraged by the failure, he initially devoted himself only to political activity. He did not begin to write again until 1935 when he was in emigration. There he made the stories Samorastniki describing the hard life of the Carinthian Slovene peasants again, and the novels Požganica and Doberdob , while playing in Slovenia borderland but thematically, a chronicle of the political changes during the First World War and the time of the Carinthian Plebiscite include .

In 1945 the novel Jamnica was published , which follows on from it and describes the situation in what was now Yugoslav Slovenia in the 1920s. The volume Od Kotelj do Belih vod , in which his migrations between the Austrian and Slovenian parts of Carinthia are described , is particularly significant in terms of the context of the Slovenian-populated part of Austrian Carinthia . It also contains the popular account of the illegal border crossing in 1932, Gosposvetsko polje , which only had the purpose of being able to see his wife and children again for a few hours after three years of separation. To commemorate this, a memorial hike takes place every year from Kotlje to Klagenfurt. The last book to be published a year before his death was the narrow volume Solzice , eleven children's stories from his youth.

Prežihov Voranc was brought up by his father in the Slovene national sense. He always retained this attitude later on, although in his youth he turned from the Christian Socialists to the Socialists (the later Communists). The love for his Carinthian homeland is actually decisive and also visible in his literary works. He also always remained an advocate of the Slovene territorial claims to Austria, which concerned the Slovene part of Carinthia.

This, together with his commitment to the Communist Party and the partisan movement during the Second World War, prevented his attention and reception in the German-speaking area for a long time, while he was appreciated in Yugoslavia and also by parts of the Slovenian ethnic group in Austria .

It was only in the 1980s that some of his novels and stories were translated into German and published by the Slovenian publishers Drava and Wieser in Klagenfurt. Since his person and his literary work are at the center of the political and national conflict between Austria and Slovenia, his works are very interesting and instructive for understanding this historical conflict and for understanding the Slovenian point of view. 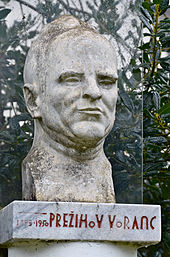 In addition to monuments and the name of a school, a library in Ljubljana was named after the writer. There is a museum dedicated to him in his birthplace.