The giant squid ( Architeuthis dux ; often erroneously referred to as the giant octopus ) is widespread worldwide. Like all squids , the giant squid has ten arms grouped around the mouth, two of which are transformed into tentacles . For this reason, giant squids are assigned to the ten-armed squid or Decabrachia. The exact position within the system is unclear.

The animals are caught particularly frequently on the coasts of Norway , Great Britain , Newfoundland , Japan , Australia , New Zealand and South Africa . They probably live at a depth of over 300 meters, according to other sources, 500 to 1000 meters. For this reason, more frequent catches of the animals have only become known since the beginning of deep-sea fishing with trawls . Some remains were found in the stomachs of sperm whales .

The giant squid, Architeuthis dux , is the only species of the genus Architeuthis , which in turn is the only genus of the family Architeuthidae within the cephalopods . Originally it was assumed that other Architeuthis species existed ( A. martensi ( Hilgendorf , 1880) , A. physeteris ( Joubin , 1900) , A. sanctipauli ( Vélain , 1877) , A. hartingii Verrill , 1875 , A. japonica pepper , 1912 , A. kirkii Robson , 1887 , A. stockii ( Kirk , 1882) ). Molecular biological studies, however, came to the conclusion that the giant squid is a single species that is found worldwide. Thus the other species were synonymous with Architeuthis dux .

The giant squid is dark purple to red-brown in color on the top, with the arms being lighter on the top and bottom than on the sides. Like many squids, it is able to actively change its color through chromatophores lying in the skin , by expanding or contracting them. Although the squid has luminosity (bioluminescence) , the detached luminous organs known as photophores , which carry related groups such as the Histioteuthidae , are missing .

The body of the giant squid consists, as is typical for the entire relatives, of the head almost up to a meter in length and the trunk section with a pair of fins near the end of the body. The arms are on the head. The body of the squid is narrowly conical in outline, the coat ends in a short, tail-like protrusion in adult specimens. Near the end there is a weakly muscular, flap-like fin on each side; the fins of the giant squid are relatively small compared to other squids and have an egg-shaped outline. Inside the trunk sits a transparent support structure called a gladius, a remodeling of the calcified schulp of other cephalopods. The giant squid has an ink bag . The ejected ink remains connected to a coherent structure, it does not form a cloud, as with other cuttlefish. It is believed that as a decoys it is intended to confuse and distract an attacking predator.

The animal can suck water into the mantle cavity of the trunk and expel it in a concentrated water jet through a very mobile funnel. It achieves high swimming speed and maneuverability. The cylindrical head of the squid has an eye on each side, which, with a diameter of up to 25 centimeters, is one of the largest eyes in the animal kingdom. The eyes have a dark iris and lens, but no cornea . The mouth opening in the middle of the tentacles has a chitinized, very hard beak , which is reminiscent of a parrot's beak . The beak is the only hard part that remains inside the stomach of predators like the sperm whale. Much information about the distribution of the species is only available through the analysis of such beaks in the stomach contents, which can be determined by their shape up to the species.

As is typical for all squids, the species has ten arms, eight of which are relatively short and two extremely long, which are also referred to as tentacles in the group. The normal tentacles reach a length of up to three meters with a basal circumference of 50 centimeters. The two arms of the males on the belly side are transformed into mating tools, they are called the Hectocotylus . The normal tentacles carry two rows of suction cups , which become smaller towards the tip and merge into rectangular adhesive pads distally. The main tools for catching prey are the tentacles, which when stretched out can be longer than ten meters with a basal circumference of about 25 centimeters. They are smooth close to the body, further out there are alternating suction cups and adhesive cushions in two rows. The outer (distal) end of the tentacles is widened to a weak club. This has four rows of toothed suction cups on the underside (manus or hand), of which the inner rows are significantly wider than the outer ones. The largest suction cups can reach a diameter of about 5.2 centimeters. The muscular suction cups have short stems and are stiffened on the outside by a ring made of chitin . There have been reports of scars and marks from suction cups on the skin of sperm whales , said to be eight inches in diameter; these are not scientifically documented and unbelievable.

In specialist books there are often incorrect information about size. A problem when measuring the length of giant squids is the enormous flexibility of the arms, which is why the little changeable length of the jacket is usually used as a criterion for considering the actual size. The example washed up on the beach in Lyall Bay ( Wellington ) in 1887 should be mentioned here . It had a total length of 18.3 meters, while the mantle length was only 1.8 meters, which corresponds to a total length of about 10.7 meters for a specimen with naturally long tentacles. The largest occupied coat length is 2.25 meters, with giant squids in exceptional cases reaching a standard length of 5 meters, including the head and tentacles. Most of the total length is determined by the two long thin tentacles. In fact, a giant squid could never be detected that exceeded a length of twelve meters with unstretched tentacles.

Giant squids live to be three to five years old and thus seem to be one of the longest-lived representatives of the cephalopods. However, this means that they reach their enormous size in a very short time.

In general, giant squids are the largest cephalopods. However, the much less known and more compactly built colossal squid , which, however, belongs to the Gallertkalmare family, reaches significantly larger dimensions with a coat length of up to 4 meters. 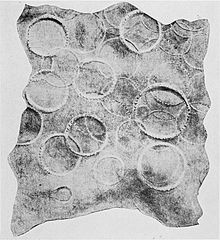 Giant squids probably orient themselves primarily by their well-developed eyesight. Their eyes are among the largest in the entire animal kingdom. Only the eyes of the colossal squid get bigger. The huge eyes also indicate the habitat of this species - ocean depths into which only an extremely small amount of light can penetrate. Little is known about the hunting behavior of the animals. Stomach examinations mainly revealed the remains of squids (including our own species) and fish ( e.g. Hoki ). So far it has been assumed that the giant squid is more of a stalker than a persistent hunted animal. However, the first recordings of a living animal cast doubts on this thesis. The theory that sperm whales are also on his menu is bogus. It is more likely that the sperm whale is the only real predator of large fully grown giant squids , as shown by suction cup scars on the body of whales and the remains of giant squids in sperm whale stomachs. Sperm whales feed mainly on various species of squid and undertake very long and deep dives during the hunt. With diving depths of over 1000 meters (occasionally up to 3000 meters) they can prey on squids that only occur in the deep sea and cannot be reached by any other mammal. Gigantic suction cup scars on the whale skin also promoted the legend of squids that may be over 60 meters tall. But as we now know, the scars grow with the whale skin - i. H. a deep scar, which a sperm whale once received as a young animal, expands as the animal grows. In the adult it grows to a size that reflects the growth of the whale, but not the size of the squid that once caused the scar. Smaller specimens of giant squids are also eaten by various fish and sharks, and very small specimens on the surface are even eaten by deep-sea birds such as albatrosses . Medium-sized specimens also fall victim to large gray sharks or, in addition to sperm whales, other larger toothed whales that hunt for cephalopods in the deep sea.

By exchanging the sodium cation in seawater for ammonium in their muscle tissue, the giant squids, like some other squids , receive the static buoyancy they need to float in salt water . The ammonium chloride solution is noticeable by a strong odor given off by the animals. For this reason, the tough meat of the giant squid is inedible for humans.

Even less is known about the mating and development of animals than about nutrition . Apparently the male implants spermatophores under the partner's skin during mating . Several females were found with implanted spermatophores; How these ultimately fertilize the eggs is not yet known. Sperm findings show that giant squids do not seem to make a pre-selection based on sex; Spermatophores implanted by other males have also been discovered in male animals. The mating behavior shows that mating with non-fertile partners can represent an evolutionary advantage; a reproductive strategy that includes the insemination of male animals is evidently more promising than the laborious search for a female squid.

In Ozeaneum Stralsund one is crafted copy issued that of New Zealand was caught fishermen. The animal, which weighs 49 kilograms and is over six meters long (from the tip of the mantle to the tip of the tentacle), has a special feature at the rear end of the mantle: implanted spermatophores were found there, the origin of which is currently not clear. 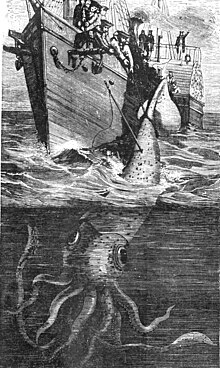 November 30, 1861: The crew of the Alecton harpooned a giant squid 120 miles northeast of Tenerife.

Sometimes fantastic reports about giant octopuses were considered to be sailors' yarn until the middle of the 19th century . Although there have been reports of sightings of giant squids and encounters with these animals for centuries, the stories were mostly referred to the realm of legends and cryptozoology . Even the finds of stranded squids with lengths of well over 10 meters were not taken seriously by zoology .