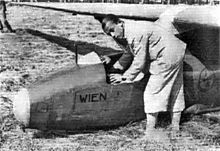 The son of the dentist Robert Kronfeld (1874-1946) and his wife Hedwig, born German († 1905; sister of the editor Paul Deutsch ), was the nephew of the doctor and writer Adolf Kronfeld and the botanist Ernst Moriz Kronfeld . His brother was the doctor , dentist and famous oral pathologist Rudolf Kronfeld (1901–1940).

He designed the Kronfeld auto winch for towing tests , undertook the first mountain glider flight ( Rax , Jakobskogel) in 1929 and shortly afterwards, on February 26, 1929, the first glider flight from the Kahlenberg (crossing the Danube and landing on the ice cover of the Kuchelau harbor ). He organized major flight days and was the first glider pilot to cross the English Channel in both directions in 1931: it took off on June 20, 1931 at 7 p.m. from Boulogne-sur-Mer and landed at Dover Castle . From there he started the return flight around 9 p.m. on the same day and landed again at Boulogne-sur-Mer ( St. Inglevert ).

Due to his Jewish origins, he emigrated to England in 1933 and took British citizenship in 1939. In the mid-1930s he took over the British Aircraft Company , which he renamed Kronfeld Ltd. from May 21, 1936. continued. The most famous product was the Kronfeld Drone light aircraft . In the Second World War he put himself in the service of the Royal Air Force, where he made it to the rank of squadron leader.

On February 12, 1948, he took off with a flying wing glider for a test flight over southern England. The aircraft was still immature and came into a tailspin shortly after releasing, overturned and crashed from a height of 5000 m near the village of Lasham. On board was an observer who was able to save himself with the parachute. Kronfeld himself died in the rubble of the General Aircraft GAL.56 . 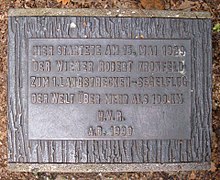 Memorial stone on the occasion of Kronfeld's 100 km flight

In 1930 Kronfeld was the winner of the Hindenburg Cup for gliding.

In Detmold , Fulda and Oerlinghausen a street was named after him. The Vienna City Council decided on September 2, 1959 to name a street in Liesing (23rd district) after him.

In his honor, the Oerlinghausen gliding school annually announces the "Kronfeld competition" along the route of the first 100 km glider he completed on May 15, 1929.

To commemorate the world's first long-haul glider flight, a memorial stone was erected in 1990 by the Heimatverein on Hermannshöhenweg near Riesenbeck .