Robert Mallet , FRS , (born June 3, 1810 in Dublin , † November 5, 1881 in Clapham , London ) was an Irish geophysicist , civil engineer and inventor , who distinguished himself through his work in the field of earthquake research . He is sometimes referred to as the “father of seismology” and is credited with the term “ seismology ”, as well as other related terms that he used in his work, such as “ isoseist map ”. The term ' epicenter ' also goes back to him .

Mallet was born in Dublin to the factory owner John Mallet. He received his education at Trinity College , Dublin, which he joined at the age of 16 and where he graduated at the age of 20.

After graduation, he joined his father's iron foundry, which he and he brought to a leading position in Ireland. The company supplied iron castings for railway companies, to build the Fastnet Rock - lighthouse southwest of Cape Clear Iceland and a swing bridge over the River Shannon at Athlone . Mallet also helped make the signature railings that surround Trinity College; they carry the family name at their base.

In 1832, Mallet was elected to the Royal Irish Academy at the young age of 22 . In 1835 he also enrolled in the British Association for the Advancement of Science , which later funded much of his research in the field of seismology. In 1838 he became a lifetime member of the Royal Geological Society of Ireland , and was its president from 1846 to 1848. In 1869 he was elected a corresponding member of the Göttingen Academy of Sciences .

On February 9, 1846, he presented his work "The Dynamics of Earthquakes" to the Royal Irish Academy , which is considered one of the foundations of modern seismology. In the years 1852 to 1858, with the help of his son John William Mallet , he prepared the earthquake catalog of the British Association ( The Earthquake Catalog of the British Association ), which appeared in 1858 and listed the known earthquakes and their effects. During this time he also carried out explosion experiments to determine the duration of seismic waves in loose and solid rock .

On December 16, 1857, the area around Padula in Italy was devastated by an earthquake that claimed more than 11,000 deaths and went down in history as the Basilicata earthquake of 1857 or the Great Earthquake of Naples . At that time it was the third strongest known earthquake, its magnitude is estimated at 6.5 today. Mallet, with the assistance of Charles Lyell and Charles Darwin, made a petition to the Royal Society of London and received £ 150 grant to travel to Padua and document the destruction firsthand. The result report was presented to the Royal Society under the title Report on the Great Neapolitan Earthquake of 1857 . It was a major scientific treatise in which Mallet made extensive use of the new invention of photography to document the devastation. Based on his report, Mallet developed a two-volume work that appeared in 1862 under the title Great Neapolitan Earthquake of 1857: The First Principles of Observational Seismology . In that book, he made arguments that indicated that the center of the earthquake must have been eight to nine geographic miles below the surface of the earth.

An important work of Mallet was Volcanic Energy: an Attempt to develop its True Origin and Cosmical Relations , in which he attempted to show that volcanic heat could be due to the effects of compression, twisting and other disturbances in the earth's crust . These disturbances led to the creation of vertical fault lines into which the rainwater could penetrate. If the water penetrates sufficiently deeply, the result is a volcanic eruption caused by the steam or lava eruption. 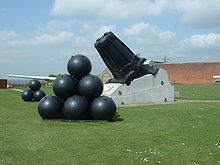 During the Krimkrieges he designed a 43 tons of heavy mortar with a caliber of 36 inches (914 mm), under the name Mallet's Mortar was known. The mortar was capable of hurling shells weighing 1.1 tons over a distance of 2.4 km. The mortar was made in individual parts that should facilitate the transport of the heavy weapon; however, its development came too late to be used. A copy was on the grounds of the base of the Royal Artillery in Woolwich erected, another stands in front of the Royal Armories in Fort Nelson at Portsmouth .

The wrought iron humpback plates he developed were widely used in bridge construction .

He was blind for the last seven years of his life. Mallet died in Clapham on November 5, 1881 and is buried in West Norwood Cemetery , London.

Mallet was elected Fellow of the Royal Society in 1854 , and moved to London in 1861. He was awarded the Telford Medal of the Institution of Civil Engineers in 1859 and the Wollaston Medal of the Geological Society of London's highest award in 1877 .

The lunar crater Mallet is named after him.