The SMS Brandenburg was a ship of the line of the Imperial Navy classified as an ironclad until 1899 .

The four ships of the Brandenburg class were the first radio- equipped ships of the German Navy and the first German warships to be equipped on a larger scale with belt armor made of nickel steel. The installation of the heavy artillery of six 28 cm guns in three twin turrets on the midship line was progressive, as this enabled broadside fire with all guns on both sides. The following ships of the so-called Kaiser Friedrich -class went back to the smaller caliber of 24 cm and only four guns fore and aft .

Two of the ships, the Elector Friedrich Wilhelm and the Weißenburg , were sold to the Ottoman Empire in 1910 . The former was sunk in the Dardanelles in 1915 by the British submarine E11 under its new name Barbaros Hayreddin , while the Weißenburg survived the war under its new name Torgud Reis , was converted into a training ship in 1924, later used as the Hulk and ultimately in was in service with the Turkish Navy.

The funeral procession of the victims on February 20 through Kiel 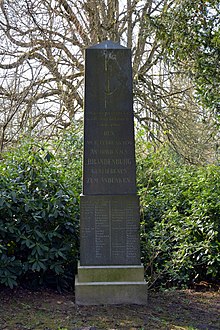 Memorial stele on the north cemetery in Kiel

A serious accident occurred on the Brandenburg during a test drive on February 16, 1894 . When the main steam pipe burst, caused by a material defect in a valve on the starboard engine, 44 people were killed (25 men from the crew, 18 from the shipyards and one member of the examination committee) and seven were wounded.

In 1900 the Brandenburg was sent together with the II. Division to suppress the Boxer Rebellion in China , but without taking part in any fighting there. At the beginning of 1901 an overhaul took place in Hong Kong . After further maneuvers, the II. Division received the order to return home in May and was back in Wilhelmshaven in August 1901 . From 1903 to 1904 the ship was modernized at the Kaiserliche Werft in Wilhelmshaven. In April 1905 the Brandenburg was put back into service and assigned to the 2nd Squadron.

After the First World War , she served as part of the V Squadron under Vice Admiral Grabow, in the coast guard service. But already in December 1915, the outdated ship was decommissioned in order to be used for a while as a living hulk and distillation ship for the extraction of fresh water in Libau . The guns were expanded and should be handed over to Turkey . The ship was moved to Gdansk in 1919 to be converted into a target ship, but this work was never completed. It was removed from the list of warships on May 13, 1919, and the ship was finally scrapped in Gdansk in 1920.

Ironclads of the Brandenburg class