from Wikipedia, the free encyclopedia
p5 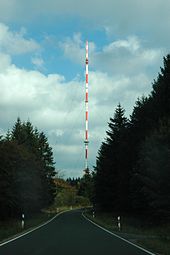 Tower of the transmitter Schnee-Eifel on the Black Man

The Schneifel is a maximum of 699.1  m above sea level. NHN high mountain range in the Eifel district of Bitburg-Prüm and the Vulkaneifel district in Rhineland-Palatinate in the western highlands of the Eifel .

The term Schneifel has nothing to do with snow or Eifel: It is derived from the earlier linguistic usage of this region and means something like aisle. This lane in turn ran over the ridge. The term Schneifel was then "Germanised" during the Prussian era and the term Schnee-Eifel , which describes a larger area, was born.

The Schneifel is located a few kilometers northwest of the small town of Prüm , which is traversed by the Prüm River, which rises in the northeast part of the elongated and rather inconspicuous mountain range . It runs from the municipality of Brandscheid in the southwest to the municipality of Ormont in the northeast. The border with Belgium is a few kilometers northwest of the mountain range.

The Schneifel represents a rump mountain range, the remainder of a Variscan high mountain range that was unfolded in ancient times . After a long period of erosion, it has recently been geologically raised again (in the Quaternary ). In places the old leveled areas can be seen, from which individual prominent ridges of harder rock rise. Such is the from Ems - quartzite existing back the Schneifel. The elongated mountain range towers over the poorly structured old plateau by around 100 m and demonstrates the resistance of the local quartz rock to the forces of weathering.

Another striking feature is its 15 km long snowfall with an average width of only 2 km, which stretches from Brandscheid to Ormont near Stadtkyll with only a few meters of difference in altitude , where it ends with the Steinberg ( 657.8  m ).

In the winter months, the snow is usually the longest in the entire Eifel, so that winter sports can be enjoyed for a longer period of time . There is a winter sports area of ​​the same name on the Schwarzer Mann mountain .

The entire length of the Schneifel is covered by bunker ruins from the western wall, which was built between 1938 and 1940 . The Bleialf transmitter and the Schnee-Eifel transmitter as well as the remains of the former US radar station Prüm Air Station are also located on their heights .

On the Schneifel extending national road  20 of Ormont comes in the northeast that of Roth at Prüm by Knauf Pesch according Prüm extending 265 Federal Street on Forsthaus Schneifel crosses and beyond their near the black man ( 697.8  m ) located summit ( 699, 1  m ) to the southwest to Brandscheid . Parking spaces are available in many places. The landscape can be hiked through on several forest trails and paths, for example on the Schneifelhöhenweg .