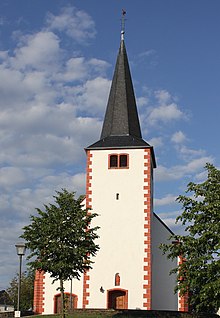 Brandscheid is a municipality in the Eifelkreis Bitburg-Prüm in Rhineland-Palatinate . It belongs to the community of Prüm .

Brandscheid is located at the southwest end of the Schneifel ridge in the North Eifel Nature Park .

A forest Brandscheit and with it the place name was mentioned for the first time in a contract from the year 1286 between the abbot Walther von Prüm and Heinrich and Gerhard von Schönecken . The place name refers to medieval slash and burn .

Heinrich and Wirich von Brantscheid are mentioned in a Prüm document from 1273 (Goerz, Mrh. Reg. III, no. 2853). Wirich is also named as the dean of the monastery “Our Lady” at Prüm. His “stomach” - probably a relative - bought the Aspe bush from him, which is located near Bleialf. The name of Brandscheid (t) is often mentioned in many documents and documents for more than 300 years, for example Heinrich, called "Freymann" von Brandscheid, and Gobelin von Brandscheid in 1304. In 1343 and 1357 a Johann von Brandscheid is mentioned as a Burgmann in Schönecken. As early as 1336, Hartrad von Schönecken enfeoffed him with Seffer Weich as a castle fiefdom.

Brandscheid belonged to the Electoral Trier district of Prüm until the end of the 18th century and was assigned to the Bleialf mayor's office. The village of Brandscheid in the prudish mayor's shop Alf had 25 fireplaces or households in 1684, a document from 1756 names 56 names, and in 1787 there were 124 inhabitants.

In 1794 French revolutionary troops occupied the left bank of the Rhine . From 1798 to 1814 Brandscheid was under the French canton of Schönberg in the Saardepartement . When the church was reorganized, Brandscheid became a succursal parish (auxiliary parish) in 1803 with the branches Sellerich , Hontheim , Herscheid and Buchet .

Due to the resolutions passed at the Congress of Vienna , the region became part of the Kingdom of Prussia in 1815 . Under the Prussian administration, Brandscheid belonged to the Bleialf mayor in the newly formed district of Prüm in the Trier administrative district . In 1843 Brandscheid had 57 houses in which 341 people lived, all of whom were Catholic . At the time, the community also included the individual houses in Mühlenberg, Unterbrandscheid and Wilhelmsau.

The development of the population of Brandscheid, the values ​​from 1871 to 1987 are based on censuses:

The local council in Brandscheid consists of eight council members, who were elected by a majority vote in the local elections on May 26, 2019 , and the honorary local mayor as chairman. Until 2014, the council had six council members.

There is a farm and several providers of holiday apartments. The largest employer in the village is the Sohns company, which constructs precast concrete parts and prefabricated halls.

The community is accessed through the state road 12 and the state road 20 . The A 60 motorway runs south of the municipality and leads to neighboring Belgium after approx. 15 km .