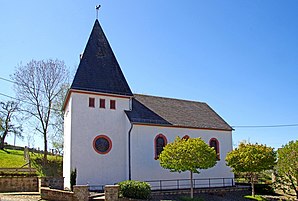 Orlenbach is a municipality in the Eifelkreis Bitburg-Prüm in Rhineland-Palatinate . It belongs to the community of Prüm .

The two districts of Orlenbach and Schloßheck are located on the southern edge of the Prüm Kalkmulde and south of Prüm on the A 60 . The highest point is a forest ridge north of the Orlenbach district at 551  m above sea level. NHN .

Cremation graves found in the “Debertshecke” forest north of Orlenbach and examined by the Rheinisches Landesmuseum Trier in 1930 indicate the first settlement in the late Latène period (5th to 1st century BC). In 1990 remains of Roman ceramics were found in the parcel of Steinchen , which suggest a small Roman settlement.

Schloßheck, the larger district of Orlenbach, is mentioned for the first time in a document from 1516. Orlenbach, which gives it its name, is documented between 1544 and 1621 in the description of the Oberlauch ban .

By the end of the 18th century Orlenbach belonged to the Community Luxembourg dairy farm or to kurtrierischen Hof Pronsfeld .

In connection with the First Coalition War , the region came under French administration in 1794 and from 1798 belonged to the canton of Arzfeld in the forest department .

After substantial parts of the Rhineland came to the Kingdom of Prussia in 1815 due to the treaties concluded at the Congress of Vienna , Orlenbach belonged to the mayor's office of Pronsfeld in the 1816 newly created district of Prüm .

The development of the population of Orlenbach, the values ​​from 1871 to 1987 are based on censuses:

The council in Orlenbach consists of six council members, who in the local elections on May 26, 2019 in a majority vote were elected, and the honorary mayor as chairman.

The Walburgis Church was built in 1743 and rebuilt in 1960 after war damage, a columned altar from the period of construction shows St. Peregrinus .