Roth bei Prüm is a municipality in the Eifelkreis Bitburg-Prüm in Rhineland-Palatinate . It belongs to the community of Prüm . 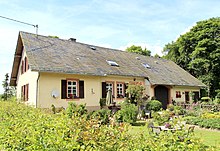 In addition to Roth, the district of Kobscheid , Mooshaus, Mooshaus-Siedlung and the forester's house Schneifel at an altitude of 657  m above sea level belong . NHN to the local community.

A mineral spring located in the Heilknipp district was known as the “Hielandesbrunnen” as early as 800. The first documented mention of Roth is in 1352 as "Rodde". Roth belonged to the area of ​​the Carolingian royal court of Manderfeld (today Belgium ).

Lively mining activity is believed to have taken place around 1500. Around 1870 Roth, previously connected to Auw , became an independent municipality. In the course of the construction of the west wall , a camp of the Reich Labor Service was built near Mooshaus , which is said to have caused an economic upswing for Roth and the surrounding area.

On January 1, 1971, the previously independent community of Kobscheid with its 92 residents was incorporated and the community of Roth was renamed Roth bei Prüm.

The development of the number of inhabitants in relation to today's municipality of Roth near Prüm; the values ​​from 1871 to 1987 are based on censuses:

The local council in Roth consists of eight council members, who were elected in a personalized proportional representation in the local elections on May 26, 2019 , and the honorary local mayor as chairman. The eight seats in the municipal council are divided between two groups of voters . In the elections before 2014, the council members were elected by majority vote.

See also: List of cultural monuments in Roth near Prüm

See also: List of natural monuments in Roth near Prüm