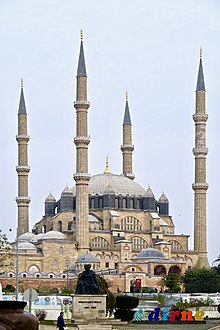 Floor plan of the mosque complex

The Selimiye Mosque ( Turkish Edirne Selimiye Camii ) is a mosque in Edirne . The building is considered the highlight of Ottoman architecture .

After Sultan Selim II ascended the throne, he spent a lot of time in the old capital Adrianople (now Edirne) in the early years of his reign. He found the old mosque unrepresentable and in 1568 ordered the court architect Sinan to make the small mosque lighter with additional windows. It was during this time that plans for a new mosque began, as the fees paid by the treasury prove. The Ottoman writer Evliya Çelebi wrote in the 17th century that there was a story that the Prophet Mohammed appeared to Selim in a dream and told him to build a mosque in Adrianople and had given him the exact location. This could be an indication of why the mosque was built in Edirne and not Constantinople. It is likely, however, that Selim II had the mosque built in Adrianople because he loved the city and enjoyed staying there. But it is also speculated that Selim did not find a representative location for such a large mosque in the Ottoman capital. Selim decided to build a building near the old sultan's palace. The ken of the old palace was preserved and housed the novices' sleeping quarters. Sinan built a bakery and a bath in 1570/71.

Construction began on April 12, 1569. Letters between Sinan and the court reveal important sources for the construction material. The stones came mainly from Anatolia and the Marmara Island , but also from Greece and Bulgaria. Water was brought in from a nearby village through canals. The Genoese diplomat Battisto Ferraro reported on October 15, 1569 that large pillars had been loaded onto ships in Alexandria intended for the new mosque in Edirne.

In July 1572, after the arches supporting the dome had been erected, Sinan asked the Sultan whether he should decorate the mosque simply or lavishly. The sultan asked for a lavish decor and instructed the architect to write verses of Surah al-Fātiha on faience around the prayer niche ( mihrāb ) . In February 1573 five Greek painters arrived in Edirne from the island of Chios to paint the mosque inside. In August 1573 the central dome was completed. In December 1574, Sultan Selim II and his son Murad III died. completed the construction in 1575.

In 1584, a minaret was struck by lightning and fell on the mosque. Sinan hurried to Edirne from Constantinople to examine the damage and commissioned the architect Hüseyin Çavuş to carry out the repairs. During this time, a large fruit and vegetable market was built in front of the gates of the mosque (demolished in 1937). In addition, the two madrasas behind the mosque were built at this time . In the west a long covered market was created.

When Edirne was occupied by Russian forces in 1878, part of the tiles was stolen and brought to Russia .

The building complex was added to the UNESCO World Heritage List in 2011.

The four 71 m high minarets each have three passageways and are fluted . The central dome , which rests on eight huge supporting columns, measures 31.28 m in diameter; its height measured from the ground is given as 43.28 m. It is not quite as high, but just as big as the dome of Hagia Sophia . On the outside, the dome is accompanied by eight hexagonal turrets with buttresses. There are narrow windows in the drum . Half-domes sit in the corners of the octagonal substructure, with shield walls with half-arches in between. The outer sides of the mosque are thus divided into three parts. A stone balustrade is placed on the lower area. This area of ​​the facade is divided into three parts by risalits and is dominated on the ground floor by a portico with three arches. Above it sits a row of narrow windows with keel arches, above that a row of semicircular window openings with bars. The light sandstone of the mosque was broken up with red.

In front of the mosque is a large portico with five domes. These are supported by two low round arches on the outside, as well as three higher inner round arches, which are separated by low keel arches. The trumpets under the central dome are barely emphasized and decorated with muqarnas elements. A U-shaped gallery runs around the central room under the dome. The mihrāb is located in a niche in the mosque and thus resembles the altar rooms in Christian churches. In the center of the prayer room, directly behind the dome, there is an elaborately designed grandstand for the muezzin. The grandstand is supported by three keel arches on each side. Elaborate paintings adorn the wooden sides with palmettes , saz leaves and Chinese ribbons. Many walls of the mosques are decorated with typical Ottoman ceramic tiles from Iznik . The marble pulpit is narrow and decorated with stone bars.

In the south-eastern corner of the qibla wall there is a gallery for the sultan's family. the walls are decorated with paintings and ceramics, the windows are made of stained glass. The interior design of the mosque varies greatly from that of other mosques. This took place in 1572 after the devastating defeat in the sea ​​battle of Lepanto . The decors emphasize essential differences between Islam and Christianity. They emphasize the unity of God and the position of Muhammad as his messenger, who, despite his prominent position, is human. The Last Judgment also plays a role. In the central field above the main entrance, the sultan is named as the founder of the mosque in eight cartouches in Arabic script, God is praised and the date of construction and completion is given. The rich calligraphies were revised in the 19th and 20th centuries.

With the Selimiye Mosque, Sinan completed his innovative spatial concept. The octagonal structure enabled him to create a centrally symmetrical space, which led to absolute calm and directionlessness in the architecture. The exterior of the mosque is arranged in an ascending manner like the steps of a pyramid. The light and airy interior cannot be seen as such from the outside. The forces of the eight inner pillars are absorbed on the outside by a corresponding strut system.