The ancient city of Xanthos ( Gr. Ξάνθος) and the associated temple district Letoon are the focus of the history of Lycia ( Asia Minor ) as the capital and federal shrine of the Lycian League . In addition to significant remains of temples and urban buildings, Xanthos stands for a number of unique Lycian monuments, whose grave structures, pillar tombs and sarcophagi are richly decorated with reliefs and sculptures. Xanthos and Letoon are around 40 km southeast of Fethiye in the district of Kaş province Antalya and belong since 1988 a World Heritage Site ( World Heritage of UNESCO ).

The history of the city spans almost 2000 years and in classical antiquity it was shaped by the struggle for independence and independence. At the head of the Lycian League and during the Roman Empire , the city gained special importance. It was rediscovered in 1838 by the English archaeologist Charles Fellows - since then many finds have been in the British Museum in London . Until 2011, mainly French archaeologists were digging intensively in Xanthos; In 2012 they (like several other European and American teams in other places in Asia Minor ) were no longer granted an excavation license by the Turkish government.

The ruins of Xanthos

The Greek name goes back to the river name Xanthos, which is already documented in the Iliad. In the Lycian language the place was called Arñna ( lyk. ), Aramaic ´WRN ( aram. ), Which corresponds to the Hittite sources for the 13th century BC. Chr. Attested name Awarna continues. During his campaign against the Lukka countries , which is described in the Yalburt inscriptions , Tudḫalija IV ( Hittite great king from approx. 1237 to 1215 BC) also conquered Avarna. He offered prisoners there and in nearby Pinali in exchange for hostages from Atrija and Utima, according to the Milawata letter (CTH 182), which was addressed to a Western Anatolian vassal whose identity is disputed. Archaeologically, however, settlement has only been ascertainable since the 8th century, and only in Herodotus' description of the events of the year 545 BC. The city enters into ancient history. In a desperate defensive battle against the troops of the Persian general Harpagos , the historian reports (around 425 BC), the Lycians withdrew into the fortified city and holed up. The men gathered their wives, children, slaves and all their possessions in the castle and burned them down completely. They resolutely dared a sortie in which everyone was killed by the Persians. Only 80 families, Herodotus said, survived because they were outside the city at the time of the Persian attack. Since there is no archaeological evidence of any major destruction of the city in the 6th century, today's researchers doubt the historicity of this story.

Another (?) Major fire was the result of the Athenian conquest of Xanthos around 470 BC. By the general Kimon ; this time there actually seem to be traces of a fire on the Acropolis. The Lycian dynast Trbbenimi ended the now subsequent dependence on Athens in 430/429 BC. With a victory over another naval expedition of Athens, led by Melesandros , who fell in battle. This event is mentioned on the inscription pillar of Xanthos (see below).

In the 100 or so years that followed, under loose Persian sovereignty, Xanthos flourished - the urban area was expanded and the splendid tombs and monuments that were preserved were created. 334/333 BC BC Lycia was conquered by Alexander the Great ; Appian claims that Xanthos was destroyed again at that time, but since Arrian and other reliable sources do not report this, this too is questionable. After Alexander's death, the city soon came under the rapidly changing rule of the subsequent Diadochian kingdoms . From 188 to 168 BC The city was under the rule of Rhodes . From then on, Xanthos was at the head of the Lycian League and was on friendly terms with Rome .

The next catastrophe, which contemporaries saw as a repetition of the alleged tragedy of 545 BC. Was considered to be 42 BC. Occurred in the turmoil of the Roman Civil War; at that time Brutus tried to raise troops and collect money to fight against Octavian and Mark Antony . The Lycian troops were defeated and the city of Xanthos besieged. Again the Xanthians are said to have burned down all buildings with women and children and killed each other, again from a modern point of view it is obvious that the events in the sources were at least greatly exaggerated.

It is still likely that Xanthos suffered in the war. First under Mark Antony , later under Vespasian , the city was rebuilt, equipped with a theater and agora (market place) and since then has enjoyed permanent imperial protection and support. However, these buildings were neglected in the early Byzantine period , when the population - as everywhere in Asia Minor - had to retreat to the city hill to defend against Sassanids and Arabs in the 7th century and expanded it into a fortress with the ancient components. In the wake of the Arab invasions in the 7th / 8th In the 19th century, Xanthos was finally largely abandoned and sank into an insignificant village.

The ruins of the urban area 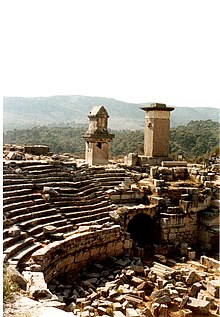 The oldest part of the city, the small Lycian Acropolis , still has the remains of a small temple, a building modeled after a wooden house and much of its original wall. However, it is dominated by the foundations of a Byzantine monastery and the mighty, also Byzantine fortress wall, which not only includes a Lycian tomb, but also parts of the theater. This is where the residents of the city had withdrawn in the last centuries.

The Roman theater , embedded in the northern slope of the city hill, shows the remarkable respect for the city's history. The older Lycian grave pillars were not removed, but deliberately included in the planning. The imperial agora below also left the Lycian monuments on its sides untouched.

Almost nothing has been preserved from the residential areas. Here you can still find the remains of two Byzantine basilicas and the well-preserved city wall, especially in the northeast. Outside there is an extensive Lycian necropolis . 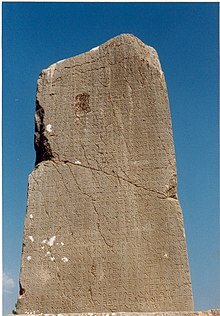 The most important and largest of all grave structures in all of Lycia is the Nereid monument from the 4th century BC. It was located in the immediate vicinity of the city entrance in the south. After being destroyed by earthquakes, its remains were brought to London and reconstructed there in 1969 to form the tomb that is now on display in the British Museum . The princely tomb was built as an Ionic temple on a high pedestal adorned with marble relief slabs. The architrave shows hunting scenes as a frieze , the gable fields contain reliefs with the image of the family of the dead and depictions of combat.

At the northeast corner of the agora is the inscription pillar that originally held the burial chamber and statue of Kherēi. It is covered on all four sides with different texts in three languages: In the normal Lycian language, the text on the south side is composed of 55 lines and its continuation on the east and north side with 73 lines. This is followed by 12 Greek verses which exuberantly praise the "son of Harpagus". This is followed by two poems in the Lycian poetic language, both of which seem to praise Cheriga, probably the dynast's older brother: the northern poem with 34 lines, and the western poem with 71 lines, breaking off in the middle of the verse for lack of space. The first historical event recognizable in the prose text is the victory over the Athenian general Melesandro in 430/429 BC. BC, the last probably a stay of the Persian satrap Tissaphernes in Kaunos 412/11 BC. Chr.

The harpy monument (around 480 BC) is one of the two pre-Roman grave pillars that tower over the rows of seats in the west of the theater. Relief panels (copies) cover a burial chamber, which rests on a 5 m high monolithic pillar. The original relief plates are now in the British Museum . The interpretation of some of the mythical creatures depicted as "harpies" by Fellows, which is doubted today, gave the pillar its name. The main representation is a scene of homage. Here the ancestors of the noble deceased receive gifts from their children. This grave pillar can be ascribed to the dynast Kybernis, who, according to Herodotus, participated in the Persian campaign against Greece in 480 BC. Took part and minted coins with the Greek letters KY or KYB.

The directly adjacent monument from the 4th or 3rd century BC BC is actually a double grave. The grave pillar is composed of plates and thus forms a lower burial chamber. The sarcophagus on it imitates a Lycian house in timber construction with a gable roof.

In front of the eastern city wall is the domed lid of the so-called “sarcophagus of the dancers”, which is depicted in the gable fields. The sides are decorated with fighting and hunting scenes.

The relief plates of the oldest Xanthian grave pillar, the lions' grave from 560 BC. BC, as well as the complete, richly decorated Payava sarcophagus are now in London.

The holy area of ​​Xanthos called Letoon with the temples of Leto , Artemis and Apollon is only two kilometers away on the opposite side of the largely silted up river Xanthos , which is now called Koca Çayı . There was u. a. found the so-called trilingue from Letoon . In the Xanthos Valley, today Eşen Valley, there are numerous other remains of settlements, such as Pinara or Tlos . The old Lycian city of Patara , about ten kilometers away, served as a naval and commercial port in Xanthos . The region can therefore be considered relatively densely populated.

On the upper reaches of the Xanthos four kilometers north of the village of Kemer are the remains of the Roman bridge near Kemer , the length of which was once min. 500 m.