The Shinkansen series 500 ( Japanese 新 幹線 500 系 電車 , Shinkansen 500-kei densha ) is a Japanese high-speed train that began service on March 22, 1997 and 9 units are available. It is operated by JR Nishi-Nihon (Engl. JR West ), among others Kawasaki Jūkōgyō ( Kawasaki Heavy Industries ) and Hitachi Seisakusho ( Hitachi ) are involved in the production.

All axes of the series 500 are 285 kW strong AC motors driven. It thus has a drive power of 18,240 kW. It is technically approved for 370 km / h, but due to the strict environmental protection regulations, it is only allowed to drive the San'yō Shinkansen at 300 km / h.

The train has a computer-aided active suspension .

The design was largely developed by the German designer Alexander Neumeister . For the design of the 500 series, Neumeister, along with other participants, received the Grand Prize in 1999 - the second-highest category of the annual Imperial Invention Prize from the Japanese Institute of Invention and Innovation. For the first time, the prize was awarded to a foreigner.

The first class has 2 + 2 seating, while the second class has 3 + 2 seating. Travelers can get snacks and drinks from vending machines in two cars . There is no bistro or on-board restaurant.

After the completion of the fourth train , the first vehicles went into service on March 22, 1997. By mid-1998, the fleet was increased to a total of nine vehicles, with this comparatively low production figure due to the very high cost per train of an estimated 5 billion yen.

The 500 series has been in use exclusively as a Kodama connection on the San'yō Shinkansen between Shin-Ōsaka and Hakata since March 2010 and disappeared completely from the Tōkaidō Shinkansen .

The variant W was announced by JR West in 1994 and the prototype was delivered in 1995. The entire fleet of nine vehicles was delivered by 1998. The 500 series was the first Shinkansen series that was operated in regular passenger service at 300 km / h.

The wagons 5 and 13 of variant W are equipped with a "T" -shaped pantograph .

Due to the criticism of the vehicle concept and the increasing availability of the N700 series, eight of the nine W variant trains were reassembled into 8-car units between 2008 and 2010. Since then, they have been used on the Kodama connections of the San'yō Shinkansen. The first train converted to variant V was presented to the press on March 28, 2008 and has been in use since December 1, 2008.

The top speed of variant V is reduced to 285 km / h. Instead of the "T" -shaped pantograph of variant W, a classic single-arm pantograph was installed on wagons 2 and 7. 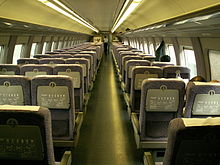 In addition to the extremely high costs per vehicle, there were several points of criticism of the 500 series, which meant that only a small number was procured.

The round shape of the vehicle means that the interior is much narrower than that of other Shinkansen trains. This is especially true for the window area with the inwardly curved side walls. As a result, the 500 series is very unpopular with passengers.

Despite the extremely aerodynamic shape of the vehicle, there is a high level of noise pollution when entering tunnels. The 700 series Shinkansen with its angular design has about 10 percent less air compression at tunnel entrances (the first 700 series designs had a similarly round hull as the 500 series and were therefore rejected).

Dimension of the vehicle nose

Another point of criticism is the extremely long nose. It is 15 m long and therefore more than half as long as the 27 m long railcar itself. As a result, the first and last wagons fit twelve fewer seats than in the 700 series. If now a 500 series train instead of the 700 series is used, some passengers have to move to other seats in the reserved seats. 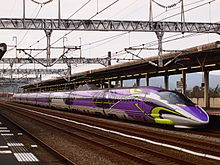 On the occasion of the 20th anniversary of the start of the anime series Neon Genesis Evangelion , the V2 set was redesigned to the 500TYPE EVA Project in November 2015. The exterior color scheme and graphic design was based on the Evangelion unit 01 (Shogōki). A car was redesigned as an exhibition space for the anime series, including a cockpit simulator of the fighting robot. In the passenger cars, seat covers, sun visors and guidance systems are based on the graphic style of the series. The train comes between November 2015 and May 2018 as a Kodama connection, used once a day between Hakata and Shin-Ōsaka.

In March 2018, JR West announced that from the summer of 2018 another 500 series train will be given a special design: Building on the success of the 500TYPE EVA Project , the train was designed in the style of Hello Kitty and also comes between certain Kodama connections Hakata and Shin-Ōsaka are used.