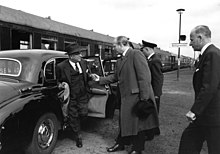 He attended school in Gumbinnen in East Prussia and later the French grammar school in Berlin , where he graduated from high school in 1929. After an apprenticeship in a bank, he studied law, went to Cincinnati (USA) for a year in 1934 with the help of a scholarship from the German Academic Exchange Service and then went on a world tour (Japan, China, Malaya, India, etc.). In 1936 he joined the Foreign Service as an attaché. Since April 1937 he was the personal assistant to the German ambassador in Paris Johannes von Welczeck , but was transferred to Addis Ababa in September due to a dispute with Baldur von Schirach . On October 1, 1939, he joined the NSDAP . In 1940 he married Hildegard Beck-Margis (1915–2001), and five children were born from the marriage. In 1943 he took up his post as secretary of the legation at the embassy to the Holy See in Rome, where he remained until 1946.

In the course of the denazification process , he was classified as “exonerated” despite party membership, as he “supported clerical and other agencies at great personal risk in concealing religious, political and racial persecution and preventing their deportation”. After internment in Germany, he worked temporarily in the private sector, then as an assistant in several Nuremberg trials , such as the Wilhelmstrasse trial against Ernst von Weizsäcker , and finally as an employee of the state of Rhineland-Palatinate. In 1954 he joined the diplomatic service of the Federal Republic of Germany and was among other things chief of protocol at the Foreign Office. The urbane, quick-witted and charming master of the balancing act showed his negotiating skills in a wide variety of positions: from 1962 to 1968 as permanent representative to the United Nations in New York, from 1968 to 1970 and 1972 to 1976 as German ambassador to France and from 1970 to 1972 as State Secretary in the Foreign Office under Federal Foreign Minister Walter Scheel . Since 1956 he was a member of the FDP .