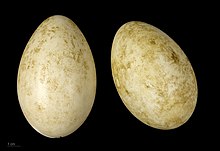 The Bar-headed Goose ( Anser indicus ) or Indian goose is a native of Central and South Asia kind of field geese ( Anser ) is one of the real geese (Anserini). It is occasionally placed in its own genus with the scientific name Chen , together with its closest relatives, the Emperor's goose ( Anser canagica ), the snow goose ( Anser caerulescens ) and the pygmy snow goose ( Anser rossii ) . The species was in 1790 by John Latham in his published work in London Index ornithologicus as Anas indicus first described .

The bar goose is about 70 to 75 cm long and about as large as the gray goose ( Anser anser ), which is more familiar in Central Europe ; their wing length is between 40 and 50 cm, the weight around two to three kilograms. The female is usually a little smaller than the male, but otherwise does not differ from the male.

The bar goose's distinguishing feature are two black-brown horizontal stripes that give it its name: the first runs in an arch from the left eye over the back of the head to the right eye, the second is parallel a few centimeters lower in the neck and is slightly shorter. Otherwise, the head and the front neck area are light gray to white, while the rear neck is black; the latter has two longitudinal white stripes. The body plumage, except on the pure white belly side, is generally a light silver-gray color, the flanks are usually a little darker, the wing covers, on the other hand, rather lighter, while the actual flight feathers are kept in deep black. The light to orange-yellow beak is between 4.5 and 6.5 centimeters long, the eyes are dark brown and the feet are orange.

Newly hatched bar geese weighing around 100 grams, on the other hand, wear camouflage colors: They have a gray beak and gray feet, the back is also gray, while the belly looks dark yellow. Especially around the eyes and on the back of the head, the plumage is also speckled with small brown spots. A light brown line running from the eyes to the back of the head is a specific distinguishing feature.

When young, the coat plumage of the striped geese is still washed out, brownish-gray. The neck stripe is missing, instead the brown drawing on the back of the neck runs down to the neck. The beak and feet are still yellowish green. In the first annual dress, young birds are already colored like the adults. With increasing age, however, the coat plumage of the geese tends from brownish to light gray.

Barge geese are migratory birds that move back and forth between their breeding and wintering areas every six months. The former are mainly in the plateaus of Central Asia , in Southeast Russia , Tibet , parts of northern India , Mongolia and the People's Republic of China , while the latter are mainly south of the Himalayas in the northwest and central south of India , in Pakistan , Bangladesh , Nepal and Burma ; some birds only migrate from the high altitudes of Tibet to lower lying areas.

The breeding area of ​​the bar goose is in lake landscapes , river plains or moors , especially in Central Asia also in steppe areas or heathland . In Tibet, the cold-adapted birds can also be found on rocky slopes up to 5600 meters high. In the wintering area, on the other hand, calm lakes, floodplains and low-lying swamps form their habitat.

In Europe the bar goose occurs mostly as a captive refugee; most of the animals have likely escaped from zoos , public gardens with ornamental poultry ponds, or private breeding stations. In the Netherlands , on the other hand, a self-sustaining population has now formed. In Germany, too, there are regular free-range broods of barbed geese (e.g. English Garden in Munich), but these populations are not yet considered to be permanently established. It is uncertain whether the bar goose can survive as a neozoon in the long term , as they can easily be hybridized with gray geese and the offspring are fertile, so that the recurring individual animals, pairs or small groups will probably be part of the gray geese population.

When migrating between winter and breeding area, many bar geese have to cross the Himalaya Mountains. In some cases, altitudes of more than 9,000 meters are reached: barbed geese have already been observed while flying over Mount Everest . They survive the lack of oxygen at these altitudes (the oxygen partial pressure is only around 30% of the value measured at sea level) through a special adaptation: the red blood pigment, hemoglobin , is different from mammals or other birds Capable of rapid oxygen uptake at low pressure . It is triggered by a single mutation which replaces the amino acid proline in the alpha chain of hemoglobin ( α-globin ) with alanine .

Bar goose on the water

Food basis of Bar-headed Goose are parts of aquatic plants and grasses , roots and shoots , such as the marsh grass grazed normal. Cereal grains and tubers are also consumed in winter ; Seaweed can also form an important nutritional component near the coast. This basis is supplemented by insects , small crustaceans , molluscs such as snails and even small fish .

The geese usually eat at night or shortly after sunrise or before sunset. Especially in their wintering area, they usually fly back and forth in large flocks every day between the spatially separated resting and grazing areas. Like most species of geese, they are very social, community-loving animals.

Striped geese become sexually mature in their second to third year of life and then mate for life. They arrive as a pair between the end of March and mid-April in their breeding area, which at that time was still covered by snow, and start looking for nesting sites. Most loosely organized breeding colonies develop in which 10 to 30 pairs breed in a confined space; often the shallow, but rarely softly laid out nests, built by the females alone, are only two to three meters apart. Small grassy islands in the steppe lakes or swamps of the breeding area are usually used as nesting sites; flat gravel banks close to the water are also popular, in Tibet also the rocky cliffs of the high valleys, often in the immediate vicinity of raven nests or birds of prey . It is reported from Mongolia that barge geese use former bird of prey nests in poplar trees .

Depending on the local climatic conditions, the female lays two to eight white eggs between the beginning of May and June, but usually four or five white eggs on average, which it then incubates for a good four weeks while the male guards the breeding site. The young hatch almost simultaneously after a good four weeks, and shortly afterwards they are lured by their parents to the water, where they are safer from predators. They often have to overcome great distances from their high-lying nests: For example, a 25-meter jump is documented from Tibet, after which the young animal ran unscathed to its calling parents after a brief period of unconsciousness. But they only reach flight ability after six and a half to seven and a half weeks; only one to three pups per family usually survive to this point. A little later, about eight weeks after hatching, the typical adult plumage has already developed. In the case of the parents, about mid-July, two weeks earlier in non-nesting birds, the moulting begins , during which they lose their flight feathers . They will be able to fly again at about the same time as their offspring and can then move to the winter quarters together with them in September, where the boys will stay with their parents until the next year.

Barge geese are not necessarily picky when it comes to choosing a partner: hybrids with the gray goose ( Anser anser ), but also the barnacle goose ( Branta leucopsis ), which belongs to another genus, are known; in addition, matings with the shelduck ( Tadorna tadorna ), the paradise kasarka ( Tadorna variegata ) and the collar kasarka ( Tadorna tadornoides ) have been reported, which are even divided into a different subfamily .

The species population is estimated at 52,000 to 60,000 birds (2004), and the trend is falling. They are now considered endangered in India as well as in Pakistan and China, especially due to shooting, egg robbery and loss of habitat. The IUCN , however, sees the total population as safe.

Barge geese are mainly pursued in their wintering areas and are therefore very shy there; In the breeding area, on the other hand, they are very trusting and have a short escape distance. Because of their low aggressiveness, they are considered ideal breeding birds and can easily be kept in captivity.

The bar goose appears in ancient Indian epics under the Sanskrit name Hamsa or Hans - both are etymologically related to the German word Gans and the Latin Anser and, like the latter, go back to the Proto-Indo-European word ghans . It is still today a symbol of the god Brahma , the creator of the universe; on his most important temple from the 14th century in Pushkar , India , it is depicted above the entrance gate. In addition, it is also the emblem of the Paramahamsa , the world-turned sages, because it flies high above the low and petty hardships of everyday life in perfect beauty towards the divine - its annual hike over the Himalayas is considered a religious pilgrimage. Their syllables ha (to breathe out) and sa (to breathe in) are also associated with the experience of the breath, which is important in Hinduism .