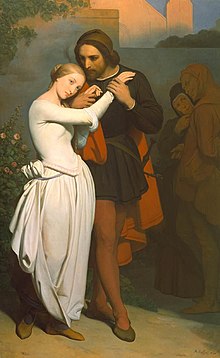 Faust and Margaretha in the Garden
( Ary Scheffer , 1846)

Susanna Margaretha Brandt (born February 8, 1746 in Frankfurt am Main ; † January 14, 1772 ibid) was a Frankfurt maid who, together with the case of Maria Flint, served Goethe as a model for the Gretchen tragedy in his Faust . She killed her newborn child and was sentenced to death and executed for it .

Susanna Margaretha Brandt was born the eighth child of a soldier and grew up as an orphan . She worked as a maid for the widow Bauer in the Frankfurt hostel "Zum Einhorn". Three or four weeks before Christmas 1770 she was seduced by a journeyman goldsmith from Holland , who had stayed at the inn as a guest while traveling . According to her later testimony, he invited her to wine and flattered her with fine words, possibly also putting a powder in the wine, because "she felt so strange that she could no longer help herself, the devil had to put his hand in his Had a game ”.

After a few days, the goldsmith moved on to Russia . Susanna Margaretha Brandt didn't know his exact name or address. She hid her pregnancy from her two sisters and her landlady, although they soon became suspicious. She continued to work from morning to night. A doctor she went to when she failed to " cleanse " prescribed her tea. He didn't notice anything about the pregnancy.

Four weeks before the confinement , she went to see another doctor at the urging of the other women. Even he didn't notice that she was seven months pregnant. On July 31, 1771, she was stricken with nausea and severe abdominal pain in the laundry room. The farmer widow made her a cup of tea and threatened to dismiss her at the same time. The concealment of a pregnancy or even a secret confinement were threatened with punishment at that time.

On the evening of August 1, 1771, she gave birth to a boy in the laundry room. It was a fall birth, the child fell headfirst on the stone floor. She later testified that it only groaned briefly. In a panic, she grabbed his neck with her left hand and scratched his face with her right; then she hid it in the stable on the Staufen wall behind the house.

At dawn, when the city gates opened, she fled via Höchst to Mainz , where she had to sell her earrings in order to be able to pay for the market ship and the hostel. The next day she returned to Frankfurt completely penniless and exhausted. She was arrested by the guard at the Bockenheimer Tor and taken to the prison in the Katharinenpforte next to the Katharinenkirche . On the evening of August 3, 1771, she was taken from there to the hospital .

Five days later, the child's body , which had been buried in the Schandfriedhof of Gutleuthof , was dug up again. When it was presented to her, she collapsed and confessed, "Lord Jesus, this is my child, I laid my hand on it." After eight weeks of preparation, the court met from October 8th to 12th, 1771 in the Römer . According to the custom at the time, the criminal proceedings took place without an oral hearing. The first death sentence was passed on October 12 , after which her defense lawyer, Marcus Augustus Schaaf, had time to make a written plea . On January 7, 1772 the judgment was confirmed; it was death by the sword ; a plea for clemency was rejected the next day.

On January 14, 1772, around 10 o'clock in the morning, the convict was led to the scaffold at the main guard , where the executioner Johann Hoffmann was waiting for her at the execution chair . “The messenger led the maleficante to the chair with his hand, sat her down on it, tied her to the chair in two places, bared her neck and head, and with constant shouting from the clergymen, her head was happily removed with one stroke. "

The verdict in full

The 335-page trial file ( Criminalia 1771 , No. 62) is preserved in the Institute for City History . Also, a pair of scissors, the corpus delicti , their child is said to have mutilated by Brandt's body is in the file asserviert .

"On embarrassing investigative matters against Susanna Margarethen Brandtin, we recognize the mayor and councilor of the Kayßerliche freyen imperial city of Frankfurt am Mayn, defense based on prior elaborate research and investigation of the matter, submitted legal syndicate concerns and careful consideration of all circumstances before right that the brandtin intended by her To bring alive children born to the world, according to their own repeated confession, intentionally and maliciously committed murder, according to the prescription of the divine and secular laws, namely to bring them to the well-deserved punishment and others to the heinous example of the hardship from life to death and to demand this judgment perform seye. Closed on Tuesday, January 7th, 1772. "

Objections to the procedure

The trial had moved public opinion. The strict approach of the council was not universally applauded, especially since Brandt's defense counsel listed all kinds of mitigating circumstances in his plea. She was confused and desperate; whether the child even lived is questionable. He proved to the medical experts that they had already made wrong judgments in previous cases. In general, the child was an eight-month-old , and it is well known that (at that time) these were only rarely viable. However, the council was not impressed by the plea.

Goethe and the criminal trial

Johann Wolfgang Goethe had at that time just be studying the rights completed and worked from August 1771 to May 1772 as a lawyer in his native city . He was personally well acquainted with many of those directly involved in the process and witnessed the entire process. The court clerk Johann Heinrich Thym had been the tutor of Johann Wolfgang and his sister Cornelia for nine years . Goethe's friend and later brother-in-law Johann Georg Schlosser was the executioner's secretary at that time. The two doctors who treated Susanna Margaretha Brandt in the hospital were family doctors of the Goethes and the Textors . Other relatives of Goethe, including his uncle Johann Jost Textor, belonged to the court.

Goethe had the Liebholdt chancellery make copies of the trial files. He was so deeply impressed by the story of the Brandtin that the tragedy about the child murderer Gretchen became a central motif of the Urfaust . Still in prose written scene in the dungeon - the oldest part of Urfaust likely was a short time after Margaretha's execution .

Goethe himself did not comment on the process in poetry and truth , but merely reported in a concise, detached form: "Soon a great crime was discovered, the investigation and punishment of which left the city unrest for many weeks."

In the case of the maid Johanna Catharina Höhn , who was executed in 1783 and who also killed her child, research now assumes that Goethe - against the intention of Duke Karl August - advocated the death penalty .