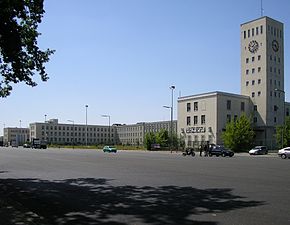 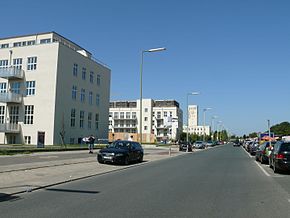 The Telefunkenwerk Zehlendorf is an ensemble of buildings in the Berlin district of Steglitz-Zehlendorf . The building housed since 1939 the Telefunken company for wireless telegraphy mbH After the Second World War in 1945 took advantage of the United States Armed Forces , the building as a headquarters and 1949 to 1994 barracks McNair Barracks . Most of the buildings were converted into apartments after 2000 .

The four-storey main building is a steel frame construction and has a flat roof. The main buildings are grouped around open courtyards . There are also one to two-storey outbuildings. The facades are plastered and hardly decorated . A striking nine-storey square clock tower , also with a flat roof, is located at the northeast corner of the complex. The tower adjoins the original administration wing. On the front side there is a figural relief with an allegory about the use of electrical engineering by mankind.

During the renovation in 2010, an increase in storeys was made in the main buildings . A stacked floor with a roof terrace was created . External insulation was also partially installed (as a rule, monument authorities only approve internal insulation ) and the old facades reproduced.

The architect Hans Hertlein submitted the development plan for the building complex in 1937 . The area was purchased in 1938, in 1939 the first parts could be occupied and in 1940 the smaller outbuildings were also completed. Development and production facilities as well as the headquarters were located on the site . Electronic tubes and radio systems were mainly developed and produced . During the war, parts of the company were outsourced for protection. About 10% of the plant was destroyed by fighting. The damaged but functional work was completely dismantled . The destroyed central wing was rebuilt in a simplified manner.

From 1945 to 1949 the building complex initially housed the US headquarters in Berlin . Then it was expanded as McNair Barracks , next to the Andrews Barracks and the Roosevelt Barracks , to the third large barracks of the Berlin Brigade . The barracks was named after US General Lesley J. McNair . In addition to accommodation of soldiers training facilities at the site were officers' clubs or club homes , gyms , bakery , library , several shops and a cinema housed. At times up to 2300 soldiers were stationed in the barracks. After German reunification in 1990 and the subsequent withdrawal of the US armed forces, the site was handed over to the city of Berlin in 1994.

The McNair Museum has been located on the site since 1993 . It documented the diverse history of the civilian employees who were employed by the three western allies. In 1995 the 60,000 square meter building ensemble was placed under monument protection. After Tempelhof Airport , it is the second largest monument in Berlin.

The individual buildings were sold to various investors and have been converted into loft apartments , penthouses and maisonettes . Institutions such as the Phorms School also moved into renovated buildings. The different phases of construction for housing were Lesley Lofts, Loftland and Monroe Park. The Lesley Lofts are named after Lesley J. McNair, who gave the former barracks its name. Monroe Park, on the other hand, is reminiscent of the American actress Marilyn Monroe and thus alludes to the central promenade of the former barracks, which is named after the director Billy Wilder . The Monroe Park was planned by the architect Sergei Tchoban and could only be realized with a four-year delay because the investor Lehman Brothers had to file for bankruptcy in 2008 .