The TPUs developed by Google were specially designed for the TensorFlow software collection . TPUs are the basis for all Google services that use machine learning and were also used in the AlphaGo machine-versus-human competitions with one of the world's best Go players, Lee Sedol .

The first generation of Google's TPU was presented at Google I / O 2016 and was specially designed to support or accelerate the use of an already trained artificial neural network . This was u. a. achieved by a lower precision compared to normal CPUs or GPUs and a specialization in matrix operations.

The TPU consists of a systolic array with a 256 × 256 8-bit matrix multiplication unit (MMU), which is controlled by a microprocessor with a CISC instruction set. The chip was manufactured in a 28 nm process and clocks at 700 MHz with a TDP of 28 to 40 W. The TPU has 28 MiB of RAM on the chip. In addition, 4-MiB 32-bit accumulators are installed, which take over the results of the matrix multiplication unit. The TPU can perform matrix multiplications , convolution and activation functions , as well as data transfer to the host system via PCIe 3.0 or to the DDR3 DRAM, which is located on the board.

The second generation of Google's TPU ( TPUv2 ) was presented at Google I / O 2017 . This should not only accelerate the use of neural networks ( inference ), but also the training of these networks. These TPUs have two "Matrizenausführungseinheiten" ( Matrix Execution Unit ; MXU ) with 8 GiB of RAM. Each MXU has a computing power of 22.5 TFLOPS , although the bfloat16 data type is used, which does not comply with IEEE 754 . A TPU board with 4 TPUs thus comes to 180 TFLOPS.

The second generation TPUs can be used in the form of the Google Compute Engine , a cloud offering from Google.

HBM memory is used to increase the memory bandwidth of the architecture .

The chip area of ​​the second generation should be larger than that of the first generation due to the more complex memory interface and the 2 cores per chip. 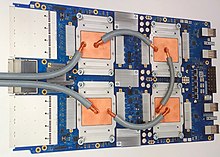