Tentzerow is a district of the Hohenmocker community in the northeast of the Mecklenburg Lake District . The community is south of Demmin. It belongs to the Demmin-Land office , which has its administrative seat in the city of Demmin . 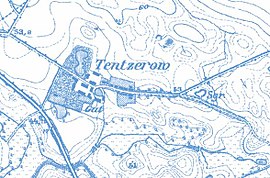 Tentzerow is located 13 km southeast of Demmin and 15 km northwest of Altentreptow . The Strehlower Bach flows through the community , which later flows into the Augraben at the Leistenower Mühle . The community lies on a cut plateau from 40 to 50 m above sea level.

North of the Strehlower Bach, the Oser runs from Hohenbrünzow to south of Hohenmocker over 2.5 km and ends near Tentzerow, where many sand pits were used.

Immediately on the village street of Tentzerow there is a Bronze Age (1800 to 600 BC) bowl stone (cult stone). Whether that was its original location can no longer be determined.

An older settlement of the place has also been proven by an extensive Old Slavic to Yugoslavian (600 to 1200) settlement on the Ziegenberg.

In the manor park there is an early German (1230 to 1400) tower hill complex on the edge of the pond , which is to be regarded as the starting point for the establishment of the place. This ground monument is of regional importance due to its preservation and its execution. The tower hill is located on the eastern edge of the former Gutsteich, cut out of the bank. A 20 m wide water-bearing ditch protects the system. The hill is steeply sloped, about 5 m high and has a plateau of 8 × 10 m.

Tentzerow was from time immemorial a fiefdom of the von Voss family and was referred to in the documents as "Denczerow" and as a manor. A windmill and 12 fire places were listed.

The Swedish registration cards from 1698 show the place with 13 buildings and a chapel. The latter was probably torn down later because it no longer appeared on any maps.

On March 26, 1720, King Friedrich Wilhelm I gave the estate to Lieutenant General von Borke . He sold it on December 20, 1726 to Ilse Catarina Normann and her three sons Bogislaw Balthasar, Caspar Ludwig and Carl Friedrich for 16,666 thalers. Tentzerow and Hohenmocker thus became a fiefdom of the Normann family . After the death of the last brother Carl Friedrich von Normann in 1776, the estate went bankrupt and was auctioned by landscape director and district administrator Heinrich Peter von Podewils for 24,150 thaler. It was given to him on February 3, 1777 and confirmed by the king on May 8, 1777. After his death in 1799, the merchant Christian Gottlieb Krause bought the estate. His son Gottlieb Ferdinand von Krause was raised to the nobility on January 18, 1817.

The Prussian original table sheet (PUM) from 1835 clearly shows a large compact estate with a southern baroque park and northern landscape park by the pond, even the tower hill castle is shown. The village is an Anger placed at the east end of the property.

In 1839 Baron Carl von Seckendorf bought the estate, which he still owned in 1862. At that time the village consisted of 7 residential buildings, 17 farm buildings and had 96 inhabitants in 15 families.

Around 1880 the estate was expanded and modernized according to the measurement table (MTB). The village part was also expanded. Until after 1920 according to MTB nothing has changed.

The two-storey manor house is a renovation from the beginning of the 19th century. The manor house is a two-storey plastered building with a lite-like colossal structure. On the courtyard side a single-axis side projection and a wide driveway. On the garden side there is a three-axis central projection with a triangular gable. From 1934 it was the headquarters of the settlement society of the Society for the Promotion of the Inner Colonization of Berlin-Dahlem. After 1945 the council of the community used the manor u. a. for apartments.

Tentzerow was directly affected by the land reform in the Soviet occupation zone . The refugees now present here received land from the expropriated property and subsequently built new farmer settlements to the west and east of the former property. After 1960 all farmers were certainly in an agricultural production cooperative (LPG), in the now enlarged village an agricultural plant was built in the remains of the property.

The manor house has been preserved, but in ruins (as of 2006), the manor complex and park are only remnants.

Tentzerow was the original name of the community Hohenmocker. The change took place on January 1, 1951.

The A 20 runs east of the town and can be reached via the Jarmen junction . The Neustrelitz-Stralsund railway ( Berliner Nordbahn ) runs through the community and the 110 federal highway to the north .