Thaïs is an opera in three acts (seven images) by Jules Massenet ( music ) with a libretto by Louis Gallet .

The plot is based on the historical novel Thaïs (1890) by Anatole France , which in turn goes back to the drama Pafnutius (after 962) of the Hrotsvit by Gandersheim . The plot goes back to the legend of the Egyptian hetaera and hermit Thais , which in turn probably contains biographical aspects of the older Greek hetaerae Thaïs , a lover of Alexander the great .

Athanaël, a young coenobite , tells his friars about the debauchery he had to experience on a visit to his hometown Alexandria , and which emanated from the courtesan Thaïs. In a dream, Thaïs appears to him, who performs a lascivious dance. He interprets this dream as an invitation to lead Thaïs on the right path.

Athanaël is back in Alexandria and visits his childhood friend Nicias, who, as it turns out, is himself one of Thaïs' lovers. When he hears of Athanaël's plan of conversion, he warns him of the vengeance of Venus , but nevertheless agrees to introduce him to Thaïs. At a party on the same evening, the two of them confront each other.

Thaïs is alone in her palace and plagued by self-doubt. In her famous "Spiegelarie" she begs Venus not to let her beauty fade away. When Athanaël appears at this vulnerable moment and praises the promises of eternal life to her, he meets her interest for the first time. But she is not yet ready to give up her sinful life and Athanaël feels for the first time that he has to fight the temptation of her beauty. When Nicias can also be heard from afar, the contradicting wishes of the two men cause her to conflict and push them both away.

After a long meditation, Thaïs agreed to follow Athanaël on the path of renunciation. She only wants to keep a small statue of Eros from her possessions because she sinned against love, not through love. When Athanaël learns that the statue is a gift from Nicias, however, he insists on its destruction. The remaining guests appear and, when they hear of Thaïs' conversion, refuse to let them go. But Nicias respects Thaïs' decision and starts a diversionary maneuver to enable the escape. Thaïs' palace, which Athanaël had set on fire, is destroyed by flames. 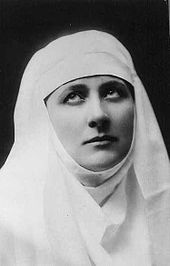 Thaïs is exhausted from the long hike through the desert, but Athanaël forces her to continue. It is only when he notices her bloody feet that he is tempered and takes care of her tenderly. Abbess Albine and some nuns appear from a nearby monastery and take Thaïs in. Only now does Athanaël realize that he will never see Thaïs again.

Athanaël has returned to the community of the coenobites, but finds no rest. When he hears in a vision that Thaïs is dying, he realizes that he loves Thaïs. Desperate, he sets off to see her again.

Athanaël finds Thaïs dying in Albine's monastery. He confesses human love as the only truth, but Thaïs can only recognize in him the one who showed her the way to eternal life. When she dies with a visionary look at the sky, Athanaël collapses, completely shaken.

Although Massenet calls Thaïs ' Comédie-lyrique ' in the subtitle , the piece also has influences from the grand opéra , Wagner's musical drama and Italian verismo .

Anatole France's novel Thaïs attracted considerable attention when it appeared in 1890. Massenet received the suggestion that the book should be used as a model for an opera from his publisher Henri George Heugel. Massenet worked on the score in 1892/93 and provided the American soprano Sybil Sanderson for the role of the Thaïs, who had already successfully created the title role in Massenet's Esclarmonde and was at the time under contract at the Paris Opéra-Comique . However, when she moved to the Opéra Garnier , the premiere of the opera Thaïs was also moved there.

The first performance on March 16, 1894 was received critically. Massenet then created a second version, which was also performed in the Opéra Garnier on April 13, 1898. This performance was a great success.

Although Thaïs is considered one of the most important works by Massenet after Manon and Werther , it was never able to establish itself as a repertoire piece (with the exception of the Paris Opera , where the piece was performed almost 700 times until 1956). One reason for this may be the above-average singing challenges of the two main roles Thaïs and Athanaël, which can only be mastered by the greatest singers. The soprano Mary Garden was considered the most important interpreter of the Thaïs . In recent times u. a. Anna Moffo , Beverly Sills , Leontyne Price and especially Renée Fleming interpreted the role. After Renée Fleming sang the opera in Chicago in 2003, a tour followed in 2007 with concert performances at major theaters in Europe (Vienna, Paris, London, Barcelona). This was followed in 2008 by an opulent production at the New York Metropolitan Opera under the direction of Jesús López Cobos , again with Renée Fleming in the title role and with Thomas Hampson as Athanaël, which was enthusiastically received by critics and audiences.

Since the work is rarely on the opera house repertoire, the audience is familiar with the title through the meditation from “Thaïs” , a somewhat sentimental instrumental piece for solo violin and orchestral accompaniment, which has become a permanent fixture in concert life in various arrangements. In the context of the opera, it represents an entracte music that is played between the two images of the second act in front of the closed curtain and marks the transformation of the Thaïs from whore to saint.