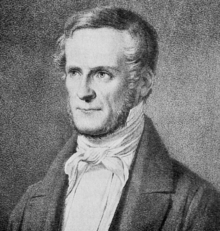 Theodor Friedrich Dethlof Kliefoth (born January 18, 1810 in Körchow , † January 26, 1895 in Schwerin ) was a German Protestant theologian and church reformer. He is considered the most important representative of Neo-Lutheranism in Northern Germany and the most important theologian in Mecklenburg church history. Kliefoth represented a comprehensive repositioning of Lutheranism, which was to be based on a renewal of worship, theology and church order from the spirit of the Reformation .

Theodor Kliefoth was born as the eldest son and first of twelve children of the Mecklenburg pastor (later superintendent) Johann Kliefoth (1772-1869). He had his first school lessons with his younger brother from his father. This was a sober and strict teacher. The grandmother exerted a great influence: she came from a French family and probably took over the first lessons, so that Kliefoth spoke French very well. It was from her that the Kliefoth children were encouraged to work physically. The boy, who stayed in his father's house until he was 17, had to look after the parish garden, cultivate the fields and keep beekeeping. He himself later described his childhood as happy and harmonious. From 1826 he attended the Gymnasium Fridericianum in Schwerin and passed the Abitur here at Easter 1829 together with a younger brother.

From 1829 Kliefoth studied in Berlin and from 1830 at the University of Rostock Protestant theology. During his time in Rostock he joined the Corps Vandalia Rostock , which was strongly influenced by the ideas of early idealism . In Berlin he was fascinated by the ideas of Friedrich Schleiermacher , whose lectures he attended, and Georg Wilhelm Friedrich Hegel . He had personal contact with August Neander , whom he held in high esteem . Even during his studies, he was a disciplined, serious and hard-working student, to whom the easy-going student life meant nothing. During his time in Rostock, for example, he put together collections on the history of dogma and sought scientific stimulation in a like-minded group of friends.

Kliefoth's aspirations for an academic career were not supported by his father. Therefore, at Easter 1832 he had to accept a position as private tutor in a noble house in Mecklenburg. But already in January 1833 he was appointed instructor of Prince Wilhelm zu Mecklenburg at the court of Ludwigslust . He took up the position on May 1, 1833. Before that he attended Adolph Diesterweg's seminar in Berlin.

It was here that Kliefoth wrote his first published work “What benefit can pastors expect from studying the history of dogma?” It was published in 1833 in the “Church and School Gazette for Mecklenburg”. An extensive treatise on the standpoint of Lutheran dogmatics followed shortly thereafter. His work of 1834 “On Presbyteries in the Mecklenburg Regional Church” had a practical ecclesiastical effect. Kliefoth continued to deal with the writings of Schleiermacher, August Twesten and Karl Ludwig Nitzsch , and he also continued his dogma-historical studies.

When Friedrich Franz (II.) , At that time still Hereditary Grand Duke of Mecklenburg-Schwerin , went to study at Karl Justus Blochmann's institute in Dresden in 1837 , Kliefoth accompanied him as an educator until 1839. This was seminal for him from several points of view: He came close to the future prince on friendly terms, and the prerequisites for further studies in Dresden were excellent. Here he was able to complete the “Introduction to the History of Dogma”, which was published in 1839 by Hinstorff Verlag . In October 1839 he obtained a doctorate in philosophy from the University of Rostock.

Although Kliefoth did not yet hold an ecclesiastical office, he was commissioned by the state government of Mecklenburg as early as 1835 with the preparation of an expert report to redesign and tighten the theological examinations. The results were only implemented in a corresponding ordinance in 1844. In this work he pointed out the shortcomings in the constitution of the regional church. The synodal order passed on December 29, 1841 also bore Kliefoth's handwriting.

He left Dresden at Easter 1840 and was ordained on May 3, 1840 by his father as the second clergyman at the city church in Ludwigslust . Here he married Agnes Walter, a daughter of the court preacher Carl Walter . Kliefoth's sermons were vivid, concrete, and effective; they regularly kept the church full. Several sermon books were published from this period.

Theodor Kliefoth in a gown

In autumn 1844 he was appointed superintendent of the diocese of Schwerin and thus the first clergyman of the state of Mecklenburg by the now reigning Grand Duke Friedrich Franz II, against the objection of the government . He moved from Ludwigslust to Schwerin, where he took the position of first cathedral preacher. In 1848 the church government and the state government were separated, in 1850 the upper church council began work. In this, Kliefoth was the source of the ideas, although he did not take over the external leadership until 1886 as head of the church council. Kliefoth vigorously stood up for the rights of the church against interference by the state.

A monument to his thoughts on worship, church building and even his view of church history (represented in the church windows) is the neo-Gothic Paulskirche in Schwerin, built between 1863 and 1869. When it was built, Kliefoth was one of the three members of the church building commission with the architect and the Ministerialrat von Wickede. He was instrumental in establishing the principles according to which churches were built in Germany and probably beyond. These principles were formulated like theses in the Lutheran Conferences in 1856 and 1861 as the Eisenacher Regulative .

Together with August Wilhelm Dieckhoff , Kliefoth published the "Theologische Zeitschrift" in Schwerin from 1860 to 1864. In his own scientific work, a multi-volume history of the worship service, historical studies of official acts and a “theory of cult” have special weight. Kliefoth's liturgical research reached its climax in the four-volume Cantionale for the Evangelical Lutheran churches in the Grand Duchy of Mecklenburg-Schwerin (1868–1887). This was the first significant order of worship according to the church order of 1602 in Mecklenburg. Among the new creations of medieval hymns there is also Kliefoth's translation of the passion hymn Rex Christe, factor omnium , which is included in today's hymn books: "Christe, you creator of the world" ( EG 92). Overall, Kliefoth's draft turned out to be far too demanding for the Mecklenburg village churches.