The Thesaurus Picturarum des Marcus zum Lamm is an early encyclopedic collection of knowledge with a high proportion of pictorial representations from the turn of the 16th to the 17th century. Author of the collection is the Heidelberg lawyer , Palatine Churches and pioneer of Ornithology , Marcus zum Lamm (1544-1606).

The Russian embassy to the Reichstag in Regensburg in 1576

Heidelberg Castle in the Thesaurus Picturarum

With the Thesaurus Picturarum ("Treasure of Pictures"), Marcus zum Lamm tried to document the knowledge of his time in text and pictures as comprehensively as possible in book form. The knowledge represented here is shaped by the subjective perception of the author, especially when it comes to topics from the field of religion during this time of confessional conflicts.

Marcus zum Lamm put the documents together with a lot of energy and effort. B. at the Frankfurt trade fairs specifically researched for images that he was missing. Friends and relatives helped him collect. The depiction of a princely personality laid out is labeled as follows:

Did I, Elisabett Helwigin, Meynem Herr Docttor Marxen for the Lamb disse electoral easy grind in to the newen jor des 1584 jars .

And even his sovereign, Elector Friedrich IV of the Palatinate , donated a representation of himself, which he had made by his court painter and made it important to be represented in the collection of Markus zum Lamm.

The Thesaurus Picturarum is a collection of printed works, images and texts that Markus zum Lamm put together between 1564 and 1605. The work contains numerous copperplate engravings , pen drawings , watercolors and woodcuts , leaflets , newspapers and other printed matter and letters are also included. Also marble paper from the Ottoman Empire can be found in several places. There are also numerous texts that Markus zum Lamm wrote down himself, some of them reports on events that seemed important to him and that he also comments, but also copies of learned works.

The division into 33 volumes, which is still available today, was probably only made after the death of Marcus zum Lamm by his son Marcus Christian zum Lamm (* 1580). An older statement is based on the original 39 volumes, 32 of which have survived.

Volume 32 is understood as part of this because of its clear connection with the rest of the work, but was not created until much later - probably after 1682. However, the volume that is in the Berlin Art Library and contains around 80 other traditional costumes is not counted .

Writers, personalities of antiquity and important actors of history, especially of the Holy Roman Empire of the German Nation , are presented.

The breaking of the wild Lutheran animals into the Lord's vineyard

The Thesaurus Picturarum contains numerous representations that turn against , criticize and caricature both the Roman Catholic and the Lutheran denominations . This is also shaped by the life of the author, who as a Reformed man was led by the Lutheran Count Palatine Ludwig VI. was removed from his office as a councilor. In the Thesaurus Picturarum individual personalities of the Reformation are presented and commented on. The Thesaurus Picturarum is an important source for the time of upheaval at the end of the 16th century, in the Electoral Palatinate and far beyond, especially for the religious disputes between Lutherans and Calvinists .

The sharp remarks made by Markus von Lamm against the Lutherans aroused anger among the later owner of the work, the (Lutheran) Landgrave Sophie Eleonore von Hessen-Darmstadt (1609–1671), who is documented by her comments written in the margin.

The beheading of Johannes Sylvanus in 1572

Numerous battles are an important topic in this troubled epoch, which is also represented many times. The wars associated with them were the Anglo-Spanish War (1585–1604) , the Long Turkish War (1593–1606) between the Habsburgs and Ottomans, and the Dutch War of Independence (1568–1648) between Spain and the Republic of the Seven United Provinces . The author's sympathies with certain warring parties become clear. Sensational news is also included in the work: Spectacular criminal trials for political offenses, an alleged werewolf and serial killer, prophetically interpreted signs and wonders, but also political events such as the arrival of the Russian embassy at the Reichstag in Regensburg in 1576.

For many years Markus vom Lamm has kept a journal about the respective weather and inserted it into his thesaurus. In addition to meteorological observations, according to the understanding of the time, this also included events classified astronomically and astrologically as significant. He also recorded the prices of food in "expensive" and "cheap" years. This information is now an important contemporary source. 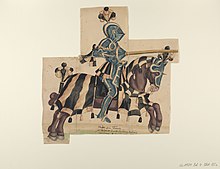 For Marcus vom Lamm, prominent people of his time were also important: The high nobility of Europe, its coronation celebrations, baptisms or weddings, tournaments or well-known criminals are recorded with their portraits.

With unusual meticulousness he had the fashion of his time, the clothing of the various classes and ethnic groups and the different regions presented in several volumes. These include depictions of a Jew from Worms , images that are used again and again today to illustrate relevant works. Markus zum Lamm commissioned the paintings from local painters. In addition to the representations already mentioned, there are those from Regensburg , Augsburg , Nuremberg , Basel , Strasbourg , Heidelberg , Mainz , Cologne , Frankfurt am Main and Amberg .

Volumes 29 to 31 of the Thesaurus picturarum are dedicated to birds. Marcus vom Lamm comprehensively captured the bird world he knew. His pictures of birds are not limited to rare exotic species, but also include species which, because of their abundance, have received little interest. Since 1577, Marcus vom Lamm has consistently collected data on around 185 species of birds, partly from his own observations in the field, partly from bird keeping at the Heidelberger Hof, then dead birds from the market and from the court kitchen. Four painters received orders from him to make watercolors of the birds. This created the first color collection of bird pictures, a rich source of historical fauna and its distribution. Through his observations, he registered early on the climate change, which intensified around 1580 and led to the Little Ice Age . He therefore recommended his sovereign to stock up on food.

After the death of Marcus zum Lamm, his son Marcus Christian zum Lamm (1580-1625) also inherited the Thesaurus Picturarum . He made some minor additions to the work, and the current compilation of the 33 volumes is probably due to him. The Chancellor of the Landgraviate of Hessen-Darmstadt , Anton Wolff von Todenwarth (1592–1641), who was born in Speyer like Marcus zum Lamm, bought the Thesaurus Picturarum and bequeathed it to his son Eberhard (1614–1663). Landgrave Georg II of Hesse-Darmstadt (1605–1661) asked Eberhard for the work in 1644 because the Landgrave, Sophie Eleonore, was interested in it. From the landgrave's collection, later: the Grand Ducal Court Library , the Thesaurus Picturarum came to the state library, today's University and State Library in Darmstadt . There it is recorded as a manuscript under the signature 1971.

A similar, but not quite as extensive collection of the time is the Wickiana .