View of the Upper West Side in north direction with the George Washington Bridge (top left). West End Avenue runs north on the left and Broadway on the right

The campus of Columbia University in the district of Morningside Heights in Upper Manhattan. 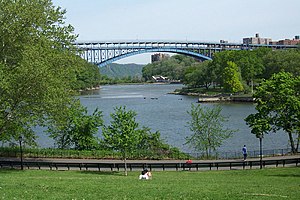 The Innwood Hill Park to the northwest along a former member of the Harlem River (May 2002). The Henry Hudson Bridge and New Jersey Palisades can be seen in the background. The peninsula (right) originally belonged to the Bronx .

The neighborhoods of Harlem make up a large part of Upper Manhattan.

Upper Manhattan (or just Uptown ) is the name for the northern part of the New York borough of Manhattan . Uptown borders Midtown Manhattan in the south , which in turn is north of Downtown Manhattan .

Upper Manhattan is also part of a larger region that New Yorkers call "Uptown". This starts north of 59th Street. Although the Bronx is not located in Manhattan, it is often referred to colloquially as "Uptown" - especially in connection with " Hip-Hop " or "Inner City" culture.

The following neighborhoods in New York City are the above. By definition in Upper Manhattan:

In the late 19th century, the city expanded through the IRT Ninth Avenue Line (IRT = Interborough Rapid Transit Company , today: New York City Subway ) and other subway lines into the previously village-like Upper Manhattan, resulting in an urbanization of this area led.

In the 20th century, the neighborhoods developed very differently. While Harlem was now impoverished, wealthy New Yorkers settled south on the Upper East Side. The one in the Upper West Side also eventually developed into a wealthy area.

However, until the late 20th century, this area was generally less gentrified than other parts of New York. An exception is the Upper West Side , whose residents are generally more affluent than their neighbors in the north (e.g. Manhattanville , Morningside Heights, Inwood and others). Since gentrification has not yet been completed in some districts of Upper Manhattan, Upper Manhattan is still associated with crime , graffiti, etc. - sometimes wrongly. Gentrification is proceeding here at a different pace than has been experienced in SoHo , the East Village, etc., as the population and social structure is different in north Manhattan .

Upper Manhattan is not yet a particularly touristy area of ​​New York, although there are some tourist attractions here - such as The Cloisters . So it is usually left out on city ​​maps for tourists as well as the other boroughs of New York: Bronx , Brooklyn , Queens and Staten Island . Even New Yorkers have the impression that Upper Manhattan is just as much a different borough as Brooklyn, for example. The reasons for this are not least the distance to Midtown Manhattan and the comparatively lower rents, so that New Yorkers no longer count this northern part of Manhattan in what they call “The City”.