Warza is a district of the rural community Nessetal in the Thuringian district of Gotha .

The place is about 6 km north of Gotha , about 14 km south of Bad Langensalza and about 30 km west of Erfurt . The closest localities are Westhausen in the north, Pfullendorf and Bufleben in the east, Remstädt in the south and Goldbach in the west. The Warzabach rises in the south-east, just outside of the village , which meanders through the village and flows into the flood ditch of the Leina after a length of 2,640 m (from the source) near Goldbach . The village lies in flat terrain that slopes slightly to 1660 m by 9 m to the north, where at about 284 m above sea level. NN the Nesse flows . The only noteworthy elevation is the Grenzberg 840 m south of the locality, over which the border of the communities Warza and Remstädt runs.

The most striking sight in Warza is the St. John's Church at the southern end of the village. 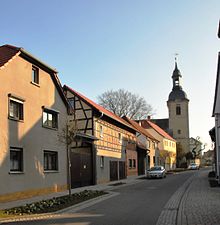 View through Kirchstrasse to the church

In 1349, a customs house with a horse changing station was built on the site of today's Gasthof Vier Jahreszeiten in the immediate vicinity of the village church. After the property was transferred to the municipality, it was demolished in 1792 to make room for a new building that still stands today. It provided board and lodging to both Prussian and French officers and also provided accommodation to the Prussian-Polish workers who were involved in the construction of the railroad. On May 3, 1869, Duke Ernst II celebrated his 25th anniversary in government here. In 1925 the hall and the stage were added. During the war and due to the use by the ZBO , there were only seldom events such as poultry exhibitions or dance events. In 1986, after a 20-year break, the hall was used again for the fair. An obelisk in front of the inn has been a reminder of the redesign of the inn square as part of the village renewal since 2009 .

On the southern edge of Warza, the Nessetalbahn ran from Bufleben to Großenbehringen via Friedrichswerth from 1869 to September 28, 1995 as a single-track branch line that branched off the Gotha-Leinefelde railway line and for which a station was built.