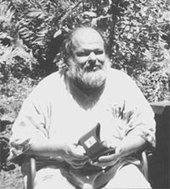 During a visit to Werner Pieper (Verlag Grüne Kraft ) in Löhrbach , around 2000

Holland was born in Kassel and moved with his family to Marburg at the age of ten , where he graduated from the Philippinum grammar school and began but did not graduate from Philipps University . In 1981 Holland was one of the founders of the Chaos Computer Club (CCC), one of the oldest hacker clubs . From 1983 he worked as a columnist for the Berliner Tageszeitung (taz) , where he reported regularly on the emerging German computer underground and the mailbox scene .

From 1979 onwards, Holland supported the film historian Hans-Michael Bock with the development of the filmographic database Cinebase for CineGraph - a lexicon for German-language films , which appeared as a loose-leaf collection from 1984. In 1983 Holland was in charge of the phototypesetting of one of the early books created entirely on a computer ( Osborne 1 ) (Roland Jaeger, Cornelius Steckner : Zinnober - Kunstszene Hamburg 1919-1933 . Hamburg 1983, ISBN 3-924225-00-1 ).

Holland was co-founder of the CCC's hacker magazine Die Datenschleuder , which dealt with the possibilities of global information networks and fast computers and in the early years often contained circuit diagrams for self-made modems ( data toilet ). The Telecommunications Systems Act of that time required modems to be approved by the Deutsche Bundespost ; in case of doubt, this was only given to modems that the Bundespost rented or sold itself. Cheaper high-speed modems, such as those that could be bought in the US, were banned. " Connecting a do-it -yourself modem was punished more severely than negligent triggering of a nuclear explosion ", as Wau Holland put it in retrospect.

Not least because of Holland's work, the CCC gained notoriety and recognition. Holland gave lectures on information control in government and in the private sector, he fought against copy protection and all forms of censorship as well as for a free information infrastructure . He compared the censorship regulations of some governments with the behavior of the Catholic Church in the Middle Ages , he viewed copy protection mechanisms as product defects. In his last years he spent a lot of time in a youth center in Jena , where he taught children both the technical and the ethical side of hacking.

After the political change in 1989, Holland lived in Ilmenau and taught ethics in computer science as an honorary professor at the Technical University of Ilmenau . He was close friends with Bernd Fix and Wolfgang Rudolph .

“It's about having certain remnants of informational self-determination at all. There is Professor Barkin in the Netherlands and he wrote a book: 2008 End of Privacy. His idea is that if the data machinery and the control of the individual by the fact that files are created over them evolve as it is now foreseeable, then Orwell's vision of 1984 was only wrong in terms of date, but not of structure . Around 2008 such amounts of data can be managed that ultimately there is no longer any privacy. At this point, the right to privacy can be regained by encrypting your messages. "

Wau Holland died of a stroke in Bielefeld at the age of 49 .

With the Wau Holland Foundation (WHS), recognized as a non-profit in January 2004 , the life's work of the namesake is to be made available to the public and opportunities are created to continue Holland's projects.