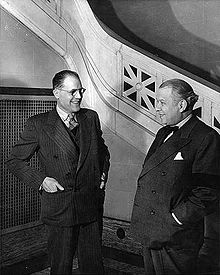 Wilfrid Pelletier studied piano, solfège and harmony with François Héraly from 1904 to 1914 . At the age of twelve he already appeared as a drummer in the St-Pierre-Apôtre band . In 1910 he became a pianist at the National Theater of Montreal. With the assistance of Henri Delcellier he was from 1911 to 1913 rehearsal pianist of the Montreal Opera Company .

After studying with Alexis Contant and Alfred La Liberté , he won a Prix ​​d'Europe in 1915 . In 1916 he went to Paris, where he studied with Isidor Philipp , Marcel Samuel-Rousseau , Charles-Marie Widor and Camille Bellaigue .

Because of the war, he had to leave France in 1917 and settled in New York. Here he became a répétiteur at the Metropolitan Opera and had the opportunity to work with singers such as Enrico Caruso , Geraldine Farrar , Léon Rothier and Grace Moore . At the same time he began touring with the company of Italian singer Antonio Scotti . On one of these trips in 1920 he conducted a complete opera for the first time.

In 1934 Pelletier became artistic director of the Société des concerts symphoniques de Montréal ( Montreal Symphony Orchestra ). In the following year he opened the Matinées symphoniques pour la jeunesse with the orchestra (since 1937 also Young People's concerts ). Another of his projects were the Montreal Festivals , which he opened in 1936 with Bach's St. Matthew Passion . In 1941 he founded the Conservatoire de musique du Québec , of which he was director until 1961.

From 1951 to 1966, Pelletier was artistic director of the Orchester Symphonique de Québec . He has also directed the children's concerts of the New York Philharmonic Orchestra and the National Youth Orchestra of Canada . In 1963 he led the Montreal Symphony Orchestra together with Zubin Mehta at the opening of the Great Hall of the Place des Arts , which in 1966 was named Salle Wilfrid-Pelletier after him. In 1984 a bronze bust of Pelletiers by the sculptor Arto Tschakmaktschian was placed in the foyer of the hall .

Pelletier is one of the founding members of the Société de musique contemporaine du Québec , he was President of the Jeunesses musicales du Canada and conducted the concert at the opening of the Grand Théâtre de Québec . His last public appearance was at the concert that was held in 1978 in Montreal in his honor.

Pelletier also wrote articles for music magazines, among others. a. for Vie musicale , which he directed 1965–1967 and published the autobiography Une symphonie inachevée ... in 1972 .

Pelletier has received numerous awards for its work. In 1946 he became Knight of the Order of the King of Denmark and Companion of St Michael and St George , the following year Knight of the Legion of Honor . In 1962 he received the Canada Council Medal and in 1964 the silver medal Bene Merenti de Patria of the St-Jean-Baptiste Society of Montreal. He was Companion of the Order of Canada , received an honorary degree from the Canadian Conference of the Arts , an award from the Concert Society of the Jewish People's Schools and Peretz Schools, and a medal from the Canadian Music Council . He was also awarded eight honorary doctorates. A street in Montreal was named after him in 1958 and the Sisters of Ste-Anne music school in 1965 .