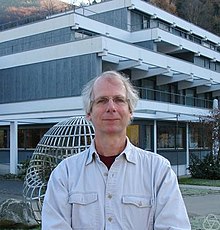 William John Cook (born October 18, 1957 in New Jersey ) is an American mathematician whose specialty is linear and integer optimization . In addition to his contributions to various graph-theoretic problems such as the matching problem , he is best known for his work on the traveling salesman (TSP) problem . In the context of this optimization problem, Cook made significant contributions to the further development of cutting plane and branch-and-cut methods, some of which are now also used as standard for the solution of other integer optimization problems. The branch-and-cut-based program Concorde, which he helped to develop to solve the problem of the traveling salesman, has been involved in all TSP records in recent years.

Cook earned a bachelor's degree in mathematics from Rutgers University in 1979 and a master's degree in operations research from Stanford University a year later . Three years later he earned his doctorate from the University of Waterloo in Ontario , Canada ( On Some Aspects of Totally Dual Integral Systems ). After a two-year stay at the Institute for Operations Research in Bonn , he spent some time as a research fellow at Cornell University and Columbia University before moving to Bellcore in 1988 .

After a further year and a half in Bonn, he was appointed professor of applied mathematics at Rice University in Texas in 1996 , where he researched methods of solving the traveling salesman problem with Robert Bixby and David Applegate, among others . After a stay at Princeton University from 2000 to 2002, Cook moved to Georgia Tech , where he was a professor until 2012. Since the beginning of 2013 he has been Professor of Combinatorics and Optimization at the University of Waterloo . He is a Fellow of the American Mathematical Society and the Institute for Operations Research and Management Science (INFORMS) .

He is editor of the journal Mathematical Programming, Series A .