Willy von Beckerath (born September 28, 1868 in Krefeld , † May 10, 1938 in Irschenhausen ) was a German painter from the Düsseldorf School and professor at the School of Applied Arts in Hamburg. 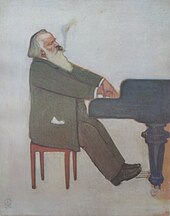 Beckerath Hall in the Kunsthalle Bremen

Beckerath studied from 1885 to 1894/1895 under Heinrich Lauenstein , Hugo Crola , Adolf Schill and Peter Janssen the Elder at the Art Academy in Düsseldorf , then in Munich and made the acquaintance of Rudolf Czapek and Alexej von Jawlensky . In 1896 he received a small gold medal at the International Art Exhibition in Berlin . Initially painting religious motifs, he soon turned to mythological themes, influenced by Max Klinger .

In 1902 he co-founded the Munich workshops for craftsmanship with Karl Bertsch and Adelbert Niemeyer , designing furniture and household items for these workshops. In 1907 his company merged with the Dresden workshops for handicrafts of the furniture manufacturer Karl Schmidt-Hellerau , the new company was called the German workshops for handicrafts Hellerau . To optimize production, a new factory was planned. In order to motivate the employees more, they should be located near the new plant and find better living conditions than usual at the time. The result was the founding of the first German garden city, Hellerau , a reform settlement on the northern edge of Dresden in the Klotzsche district .

In 1906/07 the sculpture hall in the Kunsthalle Bremen was redesigned by the architects " Eeg & Runge ", the decorative wall panels are by Alexander von Salzmann and the monumental wall paintings by Beckerath, after whom the hall was ultimately named.

From 1907 to 1930 Beckerath was Professor of Monumental Painting at the School of Applied Arts in Hamburg. For the new building for the Kunstgewerbeschule am Lerchenfeld (architect Fritz Schumacher ), which was completed in 1913 , he created the wall cycle Die Ewige Welle from 1912 to 1918 . This eight-part painting, about 44 meters wide, represents paraphrases on the development of culture. It is considered his main work and was presented to the public with a speech by Aby Warburg on March 23, 1918.