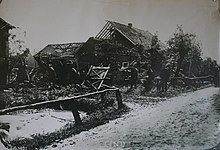 During the cyclone of July 1, 1891 , a tornado swept from Boisheim in the north-easterly direction via Anrath to Krefeld from around 5 p.m. in the afternoon . The tornado had a magnitude of F4 on the Fujita scale . Following the damaging event, appeals for donations were made in the Rhineland. At the same time there was disaster tourism; the Reichsbahn had to use special trains. For Lind , Viersen, reminiscent paths Chapel Lind at the event.

Contemporary reports of the tornado

The Coburger Zeitung of July 5, 1891 reported: “In the communities of Sittard , Rade and am Bersch, the hurricane, which moved one kilometer from south-west to north-east in the evening, wreaked horrific mischief. Hundreds of buildings, around half of them residential buildings, were destroyed in a few minutes. Some thirty buildings have all been smashed and collapsed; Almost all of the residents were able to flee into the open, so that nobody was killed, but some people were seriously injured by the collapsing walls. More than thirty people, mostly women and children, are easily injured. The seriously wounded were brought to the hospital in Süchteln, and medical help was immediately available. (...) The beer brewery located in Viersen has also been completely destroyed, the chimney has also collapsed. The forests in the area of ​​the cyclone on the Süchtelner Höhe have been completely destroyed, including wonderful beech and oak forests. (...) After several violent thunderstorms had already descended in the afternoon, a new thunderstorm was seen approaching from the west at around half past 6 a.m. south of the Süchtelner Heights. Gray clouds, which hung low like a long pile, moved in a mad hurry northeast, only to then suddenly assume an easterly direction. Everywhere one saw people standing in front of the doors and watching the threatening cloudscape with a concerned look. But only a few minutes, and the windpants were already roaring up, so that it was hardly possible for your reporter to fight for shelter through the storm. The eerie yellow-gray sky, the rain mixed in streams with hailstones the size of a pigeon's egg, the roar of the storm, the groaning and crashing of trees and houses - a horrific spectacle. "

The Freiburger Zeitung reported on July 7, 1891: “Thunderstorms and storms are reported from all parts of the fatherland and from abroad. About the damage caused by a whirlwind on Wednesday in Krefeld and the surrounding area, it is reported that several people were slightly injured in the festival hall built for the federal shooting. In Süchteln wreaked on houses, trees and livestock damage is at least 600,000 marks. The workers buried by the collapse of a ring-brick kiln were all pulled out alive. Almost no house in Anrath was spared. 40 houses were completely destroyed and around 100 damaged. Several people were wounded and one was killed. The damage is here at 400,000 marks. The rescue work, as well as fundraising for those most affected, are in progress. "

The “Gesammt-Hülfs-Comité” for those of the storm on the 1st of d. M. afflicted penniless residents of the administrative district of Düsseldorf ”published in various daily newspapers on July 11, 1891:“ On 1. d. In a part of the administrative district of Dusseldorf, especially in the districts of Kempen , Krefeld , M. Gladbach and Essen , a storm of the worst kind wreaked the most incredible devastation within a few hours. Hundreds of houses have been damaged - a large number of them have been completely destroyed - countless trees have been uprooted, entire farmsteads have been shattered. The field crops, fruit trees and gardens have been largely destroyed, numerous people, including many poor weaver families, have become homeless, and unfortunately the loss of human life is also to be lamented. According to a preliminary estimate, the damage done is well over a million marks, and unfortunately it affects, for the most part, a very poor population. "

On July 14, 1891, the Berliner Rechts-Zeitung wrote: “The magnitude of the damage caused by a whirlwind of July 1 exceeds anything that has ever been experienced here. The devastated area extends from the Dutch border to Anrath, is about 30 kilometers long and 1/2 kilometer wide. There wasn't a house on this route that wasn't destroyed, not a tree that wasn't splintered. Anrath and Süchteln are hardest hit, followed by Dülkenland , Boisheim , Neersen and Brüggen , communities that have had to pay extremely high local taxes due to the decline of the house industry. The farmers Losen and Lind are completely devastated. Over 100 houses have completely collapsed, more than 200 are threatened with collapse or are so badly damaged that they have become uninhabitable, just as many barns and stables have collapsed. "

Storm damage was also reported from other parts of the country.

An extension of the storm covered a hall at Cologne Central Station .

In Hezelaar , province of Noord-Brabant, the hailstorm devastated the place.

In a hailstorm in Everswinkel , which came from Coesfeld to Harsewinkel on July 1, 1891 and passed through Alverskirchen and Everswinkel, the entire annual harvest was completely destroyed.

In Hameln and the surrounding villages, hail fell with a weight of up to 1.5 kg per castle ; the windows of the Hamelin Minster Church were destroyed; In the Deister and Weser newspaper of July 2, 1891, it said: “We have not seen such a heavy, so terribly devastating storm here since time immemorial.” There were 5 cm hailstones in Lüchtringen .

Eyewitnesses from Herkensen told how hailstones the size of snowballs smashed roof tiles and window panes in the late afternoon.

On Höfingen it is reported about "da Haogelschleoten" (the hail locks) that they were larger than pigeon eggs and almost completely destroyed the entire harvest, so that the farmers had to bring beech leaves from the Süntel as fodder after the disaster.

In Dehmke is remembered: “On July 1st, 1891 there was a heavy thunderstorm with a terrible hailstorm, which had long before been caused by the dull rumble of thunder, the yellowish color of the clouds and an ever increasing roaring roar in the air announced threateningly. The pieces of hail, which averaged the size of a hen's egg and weighed 1/2 to 3/4 pound, fell like heavy blows of a hammer, shattering roof tiles and window panes with a terrible clatter. No piece of hail was exactly like the other, but all had a lighter core, not unlike an eye. "

The city of Freckenhorst recorded: “Another famine was triggered by a thunderstorm with violent hail on July 1, 1891. In addition to the flooding of Freckenhorst, the hailstorm destroyed almost the entire harvest. As a result, 800 quintals of potatoes had to be bought and distributed to those in need in order to avoid worse. "

The hailstorm moved on to Braunschweig ; Here it is reported: “In places the pieces of ice were as high as a foot, some as big as pigeon eggs and as sharp as broken glass. (...) The further to Braunschweig, the more terrible the weather had been. Not a stalk, not a potato stalk, not a beet leaf remained. Gardens were a wilderness and there was no leaf to be seen on the fruit trees or in the forest, they stood in the sun without shadows. In and around Braunschweig, roofs and windows were damaged by the thousands, and roofers and glaziers had been brought in from all the larger cities. For weeks the houses stood with sackcloth curtained windows, including the castle. "

It is reported from Garrey , Brandenburg, that on the night of June 30th to July 1st, 1891, a downpour fell over the Fläming and the hail completely destroyed the harvest, the planetal was like a large, wide lake.