The Zürcher Unterländer (ZU) is a regional daily newspaper in Dielsdorf in the Swiss canton of Zurich and the official publication organ for the districts of Bülach and Dielsdorf in the Zürcher Unterland as well as for the southern part of the canton Schaffhausen ( Rüdlingen and Buchberg ). It appears with the joint cover produced by the Berner Zeitung for the Zürcher regional newspapers of Tamedia AG (editor of the Tages-Anzeiger ).

Hermann Akeret, owner of the newspaper Der Wehntaler , founded in 1871 , acquired the newspaper Die Glatt, which was printed in Bassersdorf , as early as 1903 . In 1919 he also bought the weekly newspaper for the Uster district that was published in Dübendorf . At the beginning of 1948, the three newspapers were merged into one, called Der Zürichbieter . The last time Der Zürichbieter appeared on April 28, 1989 . At this point in time it went up in the Zürcher Unterländer .

Since November 1, 2006, the Neue Bülacher Tagblatt , which is considered to be conservative and with which the Zürcher Unterländer, which is considered to be liberal, has been in tough competition for decades, has appeared as the headline of the Zürcher Unterländer . The regional edition was discontinued in 2011, but the newspaper continued to appear in the Bülach area with the newspaper title Neues Bülacher Tagblatt . From November 4, 2013, this was also omitted, since then the name has only existed in the subtitle.

Participation of the NZZ 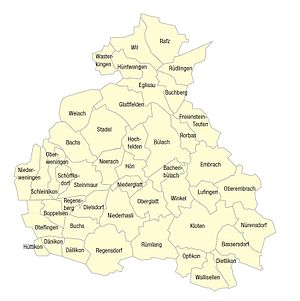 Distribution area of ​​the Zürcher Unterländers

In 2005, FPH Freie Presse Holding, a subsidiary of Neue Zürcher Zeitung , took over a 40% stake in Akeret Druck und Verlag AG (Zürcher Unterländer) against the assignment of 11% of its share capital and the transfer of NZZ's advertising marketing from Publigroupe and a 20% stake in Zürichsee Presse AG ( Zürichsee-Zeitung ) , then from an asset manager also 38% in Zürcher Oberland Medien AG ( Zürcher Oberländer ) .

In order to facilitate the exchange of articles and entire pages, the layout of the three regional newspapers Zürcher Unterländer , Zürcher Oberländer (with Uster Gazette ) and Zürichsee-Zeitung (with Linth Zeitung and Sihltaler ) has been standardized, and the newspaper titles have been modernized.

In 2006 the three regional newspapers founded Zürich Land Medien AG, which produced the cover pages for the Zürichsee-Zeitung as well as for the Zürcher Unterländer , the Zürcher Oberländer and the Anzeiger von Uster and in 2008 together with the AZ Medien ( Mittelland-Zeitung , today az Northwestern Switzerland ), the publisher Meier + Cie ( Schaffhauser Nachrichten ) and the Southeast Switzerland , the (now resold) news portal news1.ch launched.

In 2010, Tamedia took over the Gut family's 60% stake in the Zürichsee-Zeitung . Then Tamedia and FPH Freie Presse Holding exchanged stakes : Tamedia gave FPH its 100% stake in Thurgauer Zeitung and in return took over from FPH its now 100% stake in Zürcher Unterländer , and 38% in Zürcher Oberländer (and from this the shares in Zürich Land Medien AG) as well as the remaining 40% share in the Zürichsee-Zeitung . Together with the Winterthurer Landbote , in which Tamedia had held a 20% minority stake since 2005, it formed the network of “Zürcher Regionalzeitungen”, in which the advertising business of the four newspapers was bundled. The Landbote took from 2011 the production of the shell sides. Tamedia canceled the contract at the end of 2013, whereupon Tamedia was able to take over the Landbote entirely at the end of August 2013 . The production of the cover pages was transferred to the Berner Zeitung from 2014 .

On August 23, 2017, Tamedia announced that from January 1, 2018, only one German and one French-language editorial team will create the international / national cover (domestic, international, business and sports) for Tamedia's daily and Sunday newspapers . The editor-in-chief of the Tages-Anzeiger / SonntagsZeitung Arthur Rutishauser will be in charge of the German-language main editorial office (he will hand over the editor-in-chief of the Tages-Anzeiger , but will remain the chief editor of the SonntagsZeitung ). The individual newspaper titles should keep their editorial offices and editors-in-chief; Benjamin Geiger remains editor-in-chief of the Zürcher regional newspapers Zürcher Unterländer , Landbote and Zürichsee-Zeitung . According to Tamedia, the reorganization, to which the sharp decline in advertising sales has led, should not lead to any layoffs.

Since the beginning of 2018, only one German and one French-speaking Tamedia editorial team has been creating the international / national cover (domestic, international, business and sports) for the 12 paid daily and 2 Sunday newspapers of Tamedia. The previous editor-in-chief of Tages-Anzeiger / SonntagsZeitung Arthur Rutishauser is the head of the German-speaking main editorial team . He also remains editor-in-chief of the SonntagsZeitung . Benjamin Geiger remains editor-in-chief of the Zürcher regional newspapers Zürichsee-Zeitung , Der Landbote and Zürcher Unterländer .