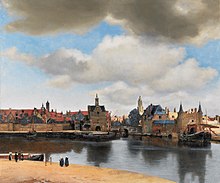 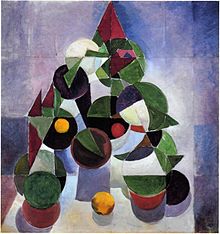 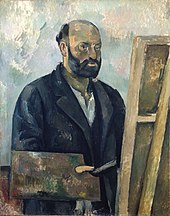 In oil painting , pigments are rubbed into oil paint with a drying oil as a binding agent and applied to a picture carrier (over a primer ). Linseed , walnut and poppy seed oil are used as drying oils . Additives to the binding agent are metallic siccatives and resins.

Oil painting is considered to be the “classic supreme discipline” of painting , which is used in particular in portrait , landscape , still life and genre painting . The durability and color brilliance of oil painting is unsurpassed.

Artists appreciate oil painting because of its good technical properties. For oil painting, balsam turpentine oil, resin varnish ( dammar or mastic resin solution) and / or oil is used as a painting medium . Turpentine is used as a diluent . An oil painting is created according to the old painter's rule of "fat on lean". A faulty painting style, for example too much oil or a painting surface that is too absorbent , can cause the oil painting to wrinkle or crack. Smoothly sanded oil paintings are more prone to cracking , the craquelure . In older oil paintings there are often cracks in age that extend like a network over the picture. An oil painting will yellow over time depending on the oils and resins used. Without exposure to sunlight, for example during storage, this process intensifies and, in return, can be partially reversed by renewed exposure to light. The oil painting can be coated with a varnish that protects the surface after all layers of paint are completely dry and hardened (often after more than a year) .

This form of painting has been known since the 13th century and was later developed further mainly by Jan van Eyck , also out of the need to overcome the limits of the more linear technique of tempera painting . The oldest known recipes can be found in the Strasbourg painter's book .

The decisive perfecting of this new technology and essential impulses for its dissemination are mainly attributed to Jan van Eyck. Antonello da Messina brought it to Italy , where it initially spread much more slowly than in Northern Europe. During the 16th century it was still common there to combine the technique with tempera colors, but other painters such as Rubens also used tempera colors in parallel.

Traces of oil paintings have also been found in the Bamiyan Valley in Afghanistan . The oldest of these paintings date from the 7th century.

Separation of shape and color

The painting technique of separating form and color, which was customary in the Middle Ages, developed primarily by Jan van Eyck and was used up to Titian, made it possible to create images in workshops as a manageable manual process. The technique allows an extremely natural and detailed representation of forms and was therefore also used in modern times by surrealists such as Dali .

After a crack drawing made by the master and - mostly by an apprentice - transferred to the picture surface ( wooden board primed with chalk ground or wooden board covered with thin linen), the artist developed the shape of the shadow. This was done with egg tempera color , for example sienna , ultramarine or black, depending on the desired effect - today one often takes Japanese ink with it. The next step is a first thin, translucent coating, the glaze , made of lean resin oil paint to develop a so-called middle tone and overall tone. This first layer is called the imprimitur. The overall tone determines the later character of the picture, whether cold or warm, muted or dark, etc. The middle tone, which lies between the darkest and lightest tone of the picture (it is often an earth color, in Dürer e.g. ocher , or in Bartholomäus Bruyn a green Bohemian earth color) allows the following development of the forms by applying the clear areas, the so-called white heightening . The light is painted with white tempera , creating the plasticity and three-dimensionality of the picture. The alternation of glaze and white heightening allows a careful development of the image and enables many correction layers. In this way, pictures of great depth and inner liveliness can be painted. We know from Tizian and Stefan Lochner that they applied up to 150 coats, in Lochner's case even more. The completion of this formal side of the picture is also called grisaille , up to this point the picture has essentially only ocher, black and white as colors.

Only now does the actual coloring take place through color glazes in oil or oil-resin paint, sometimes in several layers, until the picture is completed. First, a varnish is applied with linseed oil or dammar (the so-called intermediate varnish ), which dries through in four to five days. Then the individual parts of the mold are glazed with the desired color (local color). The local colors can be deepened by applying multiple glazing layers that have to dry each time. The underpainting should always shine through, so it must not or only very carefully be painted with body paint, i.e. paint mixed with white. Finally, the shapes of light and shadow can be deepened with points and thus the picture can be completed. In terms of painting technology, coloring is the simpler painting process. Basically, the more powerful and perfect the background, the easier and more effortless the color scheme is.

Since all layers of paint have to dry out, it can take a long time, months to years, to create a picture using the technique described here.

Tone-on-tone painting is a kind of abbreviated process in which the separation of form and color has largely been abolished and is only used rudimentarily for correction. The technique was developed around the 16th century to create large representative formats. Titian in particular played a decisive role in the development of this technique. It was also used in a modified form by Pablo Picasso (blue or pink period) and Max Beckmann . It is painted on a colored background with a clay color (mostly earth colors); such reasons are called bolus reasons . The drawing is loosely applied with dark earth color or colored gray and allowed to dry. It is started immediately with white heightening from egg tempera, the white is already tinted. The tendencies of the local colors can be determined by mixing in red, blue, etc. Beckmann worked z. B. a lot on a red background, in which the drawing in a darker tone was loosely incorporated. This is followed by a colored intermediate varnish in the basic shade. Correction layers, which also contain paint, can be applied until the artist is satisfied with the result. We know of Titian that he applied 40–50 layers. At the end the colored deepening of the picture follows with multiple glazes. For the first time, tone-on-tone painting allows the search for form in the picture while painting and allows very free design, so that a picture, as Rembrandt van Rijn often did, can be completely overturned and redesigned.

The term Prima painting or Alla prima painting is derived from the Italian. Prima "on the first" or prima vista "at first glance". With the advent of tube oil paints and the increasing importance of outdoor painting, prima painting became one of the most common oil techniques. Prima painting describes a procedure in which an attempt is made to place the color in the right place right away in one operation without later corrections such as retouching or wiping out damp paint. Most of the paint is mixed on the palette; This means that the simple color mixes, which are limited to a few colors, are easy to find again. With prima painting, the painter already has the final version of the picture in mind and uses each color as the final shade. Its counterpart is layer painting , e.g. B. the glaze painting with its underpainting , which had its climax in the Italian Renaissance and in the Dutch Baroque . The wet-on-wet technique is related to alla prima painting . Cézanne is considered a master of alla prima painting . Philipp Otto Runge complained that “people paint like a bucket of lime”. Beginners of painting often want to paint alla prima because you can see the result straight away. It is easy to overlook the fact that this technique requires experience, the lack of which leads to distressing results.

Mixed media is a painting technique in oil painting that uses different binders within a picture. As a specific achievement of the creative artists in Europe, it is an important European cultural heritage .

The heyday was Dutch baroque painting, which mixed oil paint with resins to achieve the enamel-like deep gloss. Starting in the Netherlands, this technique spread across Europe and for a long time was the main painting technique for oil paintings. It was ousted by alla prima painting and rejected by the impressionists , so that knowledge of it was practically forgotten.

Otto Dix was z. B. Master of this technique. He painted in the wet oil paint with an egg tempera paint and thus achieved his color depth. A particular connoisseur and user of mixed media in the 20th century was Egon von Vietinghoff , who developed it self-taught over the course of 35 years and, in addition to his extensive oeuvre, summarized his work experience in a handbook on the technique of painting .