(3) Juno is an asteroid in the main asteroid belt . It was discovered on September 1, 1804 by Karl Ludwig Harding as the third asteroid and named after Juno , the highest Roman goddess. After its discovery, Juno, like the previously discovered asteroids (1) Ceres and (2) Pallas, was initially classified as a fully fledged planet . Only after 1847 was a distinction made between asteroids and planets. Its path was calculated in the 1810s in Göttingen under the direction of Carl Friedrich Gauß by Friedrich Ludwig Wachter . 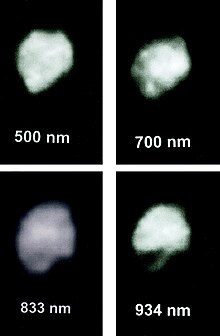 Juno has a mean diameter of about 257 km. Their mass was determined to be 2.86 × 10 19 kilograms. It has a relatively light surface with an albedo of 0.21. During opposition , it reaches an apparent magnitude of up to 7.7, making it one of the brightest asteroids in the night sky. It rotates around its own axis in around 7.2 hours.

In 1996 (results published in 2003) Juno was examined in detail with the help of a 2.5-meter mirror telescope from the Mount Wilson Observatory and adaptive optics . It turned out that Juno is an irregularly shaped celestial body. The images in the infrared range show an impact crater about 100 km in size , which was probably formed a short time ago geologically. Spectroscopic investigations suggest that Juno could be the original body of common chondrites , a common group of stone meteorites that are composed of iron-containing silicate compounds such as olivine and pyroxenes .

Juno was the first asteroid to have star obscuration observed. On February 19, 1958, Juno passed a faint star and eclipsed it for several seconds. Since then, other star occultations have been observed by Juno. The size of Juno was determined from these observations to be 290 × 245 km.