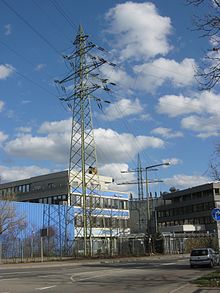 The 110 kV line Obertürkheim-Niederstotzingen was a three-phase - High voltage - free line of Stuttgart - Obertürkheim on the substations Göppingen , Geislingen and Heuchlingen to Niederstotzingen . It was built from 1919 to 1921 by the Württembergische Landes Elektrizitäts-Gesellschaft as the first high-voltage line in Württemberg to supply the Niederstotzingen pumping station of the state water supply with electricity from Stuttgart power stations. With the connection of the Niederstotzingen substation to the Bayernwerk in 1924 and a continuation from Stuttgart to the Badenwerk area in 1928, an east-west busbar was created between various energy providers. By 1992 the line was largely dismantled or replaced by new constructions.

The electrification of Württemberg began at the turn of the century with the construction of electricity plants , including on the Swabian Alb in what was then the Oberamt Heidenheim . In Stuttgart, where the first power station went into operation in 1895, the Münster power station began generating electricity for the city from 1908 with several steam turbines. A locally restricted electricity supply was the norm at the time.

In the Donauried near Niederstotzingen , the state water supply established in 1912 with headquarters in Stuttgart began with the construction of a pumping station to pump drinking water for the region between Stuttgart, Aalen and Ulm .

With the construction of the pumping station, the City of Stuttgart received an application on March 27, 1914 to supply the Niederstotzingen facilities with electricity from the Stuttgart power station in Münster. At the same time, Stadtwerke Heidenheim , which started generating electricity in 1905, signed an electricity supply contract with the Stuttgart electricity company. A 60 kV overhead line was planned to connect Stuttgart, Heidenheim and Niederstotzingen. Probably because in 1912 an even higher voltage of 110 kV was successfully used for the first time with the line between Lauchhammer and Riesa , the overhead line implemented later was also designed for this voltage level. The building was then approved on September 24, 1914.

Parts of the Niederstotzingen pumping station went into operation in 1915 - by this time the negotiations on the passage rights and preparatory work for the pipeline had already been concluded. As early as autumn 1917, the pumping system was fully operational.

To operate the overhead line, the Württemberg State Electricity Company (WLG) was founded in 1918 . The city of Stuttgart participated with 35%, Neckarwerke Esslingen with 27% and Alb-Elektrizitätswerk Geislingen with 4% of the shares. The Association of Württemberg Industrialists also took part. Construction of the line finally began on January 21, 1919.

From the spring of 1919 the German Reich took a 10.6% stake in the WLG, and from December of the same year even 95%. The Kingdom of Württemberg (from 1919 Volksstaat Württemberg ) did not participate in the share capital of the WLG - in contrast to most other German states that held shares in electricity companies in their area. Initially, the expansion of hydropower plants was also planned, but this was rejected after a short time, so that the WLG only concentrated on the construction of lines. Instead of an energy supply company, it was now a pure electricity transport company. The background to the generous commitment on the part of the Reich was the intention, already in the preliminary planning of the line route, to integrate the WLG as a link between Bayernwerk and Badenwerk as part of the Reich's own national network, the so-called Reich electricity economy. Various municipalities and overland plants also later participated in the company with a small percentage.

After around two and a half years of construction, the line was completed on August 21, 1921 and was put into operation. It began in Stuttgart- Obertürkheim and led through the substations in Göppingen , Geislingen an der Steige and Heuchlingen to Niederstotzingen . It was laid on barrel masts that were an average of 140 m apart. At the Obertürkheim substation there was a connection to the Stuttgart electricity station, which, among other things, supplied energy from the Münster power station. The Göppingen substation had a connection to the Neckarwerke Esslingen, the Geislingen substation to the local Alb electricity station. The Heuchlingen-Bachhagel overland works and the Heidenheim municipal power station were connected to the Heuchlingen substation. The supply of the pump system was guaranteed by the Niederstotzingen substation. A total of around 60,000 kW total power could be made available.

The WLG was converted into a stock corporation in 1923 and since then has been trading as Württembergische Landes Elektrizitäts -AG , (WLAG, later WÜLAG). In the same year, on July 25th, the Württembergische MPB AG (WÜSAG) was founded. In contrast to WLAG, WÜSAG was not founded purely as a line operator, but also as an energy supply company. The main shareholders here were the Württemberg state with 26%, the Oberschwäbische Elektrizitätswerke district association , the large Württemberg power plant and the Altwürttemberg power plant. Due to the participation of Württemberg, WÜSAG was in competition with WLAG. Still in its first year, the involved RWE her, making them into a composite with utilities in Southern Hesse ( Main power plants ) and Bavarian-Swabia ( Lechwerke entered).

Creation of a network

Already in 1923 the plans to connect the management of the WLAG with the network of the Bayernwerk became concrete. On the Bavarian side, when the Walchensee power plant went into operation by 1924, a circular 110 kV network with spur lines to more remote regions of Bavaria was created. In November 1924, the two-circuit interconnector between Meitingen and Niederstotzingen went into operation.

From 1925 WÜSAG built its first own line. Originally intended as a line ring, it set up a 60 kV line from Niederstotzingen via Bolheim and Aalen to Ellwangen . A line was planned between the Hoheneck substation of the RWE and Ellwangen, but it was no longer built. The area, which is highly fragmented in terms of the electricity industry, was sometimes referred to in specialist circles as the "Electricity Balkans".

The connection to the west from Stuttgart to the network area of ​​the Badenwerk was realized in 1928. A 110 kV line from the Mannheim-Rheinau substation via Scheibenhardt near Karlsruhe and Offenburg to the Laufenburg power plant on the Swiss border had been built in Baden since 1926 . In Scheibenhardt a line was connected to Hoheneck and from there to Obertürkheim. Primarily, the Obertürkheim – Niederstotzingen line was no longer only responsible for supplying the pumping station in Donauried, but represented the middle section of a south German east-west network. Unlike the neighboring companies Bayernwerk and Badenwerk, WLAG remained a pure electricity transport company exchanged the energy between the two neighboring network operators. Your control room was at the Niederstotzingen substation.

The project, which was very progressive at the time, to operate huge pumps for the water supply and the first Württemberg high-voltage line in the municipality, prompted the city of Niederstotzingen to include a stylized pump system and an overhead line pylon in the city's first coat of arms. However, since 1955 the city has had a different coat of arms.

On December 14, 1934, the WLAG was merged with WÜSAG to form Elektrizitäts -versorgung Württemberg AG (EVW), which in turn was merged on April 1, 1939 with the Upper Swabian Electricity Works for Energy Supply Swabia (EVS). In 1997, EVS merged with Badenwerk to become EnBW Energie Baden-Württemberg .

Although the Niederstotzingen pumping station was damaged during the war in 1943, the power supply was not interrupted during the Second World War.

When the neighboring Langenau waterworks went into operation, the Niederstotzingen pumping station was shut down.

The line started in the substation Stuttgart - Obertürkheim . Here there was a connection to the municipal electricity company in Stuttgart, which fed the energy it generated into the line. In 1924 a 110 kV line was built from Obertürkheim to Hoheneck and in 1928 another line from Hoheneck to Scheibenhardt near Karlsruhe , which connected the line to the Baden factory . The line from Obertürkheim to Hoheneck still exists today in its original route, although in 2009 the original masts from 1924 were replaced by new constructions.

Further along the course of the Fils, the Geislingen an der Steige substation , which belonged to the Alb electricity company, was reached. This substation also still exists and is now called Eybacher Tal . Between this substation and the Niederstotzingen substation, a line built on Danube masts at the end of the 1970s replaces the original line.

From Geislingen the line led to the Swabian Alb further east. The former Heuchlingen substation no longer exists today. This system ensured a connection to the Heuchlingen-Bachhagel overland works and the Heidenheim municipal power station via a 15 kV line. This medium-voltage line led to Neu-Bolheim and represented a link to the 60 kV system of WÜSAG.

The end point of the line was the Niederstotzingen substation, which is located south of the city. The 110 kV line of the Bayernwerk from Meitingen, completed in 1924, and the 60 kV line of WÜSAG to Ellwangen, completed in 1929, were also connected to the system. These two lines still exist today, but with masts largely replaced by new constructions.

The masts of the line were designed as barrel masts with three traverses to accommodate two circuits as single conductors. Above the crossbars for holding the conductor cables there was a small additional crossbar in sections for two earth cables.

At this point in time the line was superfluous and a large part of the route was dismantled. However, until around 2005 a section from Hattenhofen remained until shortly before the Göppingen-Süd substation, which was without electricity. In the area where the new Bünzwangen – Göppingen Süd line is to be crossed, temporary wooden masts were erected using the PORTRA system .

Between Obertürkheim and the Altbach / Deizisau power plant, a 110 kV line runs on modern barrel masts along the original route. The last original masts from the 1920s were replaced by new constructions in 2009.