The Zweckverband Oberschwäbische Elektrizitätswerke (OEW), based in Ravensburg, is an amalgamation of regional authorities in southern Baden-Württemberg that holds a 46.75% share (as of January 2019) in the energy supplier EnBW . Together with a second major shareholder, NECKAPRI -beteiligungsgesellschaft ( state of Baden-Württemberg ), which also holds 46.75%, the OEW determines the corporate strategy of EnBW.

The district association Oberschwäbische Elektrizitätswerke was founded on December 20, 1909 in Ravensburg by meetings of the three official bodies of Ravensburg , Tettnang and Wangen . One of its co-founders and its first chairman was Franz Schenk von Stauffenberg . The OEW was the first non-profit company to be founded jointly by several municipalities in Württemberg . It became the largest municipal overland plant in Württemberg.

Despite the difficulties that the First World War brought with it, the electrification of the communities with over 250 inhabitants was essentially completed by the end of 1918 . In 1919, the OEW began building the three run-of-river power plants on the Iller ( Illerkraftwerke ) to secure the power supply . They were put into operation between 1923 and 1927, and are still among the largest in Baden-Württemberg today and deliver up to 48 MW of electricity . With the participation in the Vorarlberger Illwerke began the international cooperation beyond the imperial borders.

The OEW endeavored to build a uniform Württemberg state power supply. In 1931 this led to the merger with the district association Heimbachkraftwerk Freudenstadt, to which the four districts Freudenstadt , Horb , Oberndorf and Sulz belonged. Since 1931 the OEW has belonged to 19 Württemberg district associations; Reutlingen and Urach joined in 1920, Balingen in 1921 and Reutlingen, which had since retired in 1924. The two Hohenzollern districts of Sigmaringen and Hechingen, formed in 1925, as well as 18 municipalities of the Oberamt Ulm were contractually affiliated .

After the seizure of power of Adolf Hitler a merge of many individual companies in the energy industry was targeted by the government. To this pressure towards merged on April 1, 1939, the OEW with the electricity supply Württemberg Energie-Versorgung Schwaben AG (EVS). OEW was then the main shareholder of EVS with 47.79%.

With the district reform in 1973 , through which the five OEW districts of Ehingen , Horb , Münsingen , Saulgau and Wangen were absorbed into other districts, a change in the association was necessary. The districts Alb-Donau-Kreis , Biberach , Bodenseekreis , Freudenstadt , Ravensburg , Reutlingen , Rottweil , Sigmaringen and Zollernalbkreis now belong to the Zweckverband .

In 1997 Energie -versorgung Schwaben and Badenwerk AG merged to form EnBW AG , whose main shareholders from 2000 to 2010 were OEW (45.01%) and the French Électricité de France (45.01%); According to an agreement concluded in May 2000 between OEW and (it was valid until the end of 2011), EnBW was managed on an equal footing. In December 2010, the state of Baden-Württemberg surprisingly bought the EDF share through its Neckarpri-Beteiligungsgesellschaft mbH (see also the EnBW affair ).

In addition to its stake in EnBW, OEW also holds a 21% stake in Erdgas Südwest (ESW), the legal successor to EVS-Gasversorgung Süd GmbH (EGVS).

The OEW works through its art and culture funding beyond the energy industry. Since 1952 it has made funds available to the member counties for these areas. Today the OEW's art collection includes over 800 works of art and groups of works, which range from the 12th century to the present day. In 1976 the OEW renewed the Upper Swabian Art Prize donated in 1951 by the four districts of Biberach, Ravensburg, Saulgau and Wangen . The OEW also supports the Oberschwaben Society for History and Culture , which was founded in 1996 and aims to strengthen Upper Swabian regional awareness, present Upper Swabia as a historical and cultural landscape with a long tradition and promote scientific research into the history and culture of Upper Swabia. With the support of the Gäu-Neckar-Alb memorial network , the OEW promotes cooperation between the voluntary memorial projects in the region.

OEW is also increasingly appearing on the art market as a buyer so that "lost sons and daughters from Upper Swabia (...) can be brought home from the art trade (...) to the" Upper Swabian Kingdom of Heaven "". The acquisitions are presented as permanent loans in Upper Swabian museums. 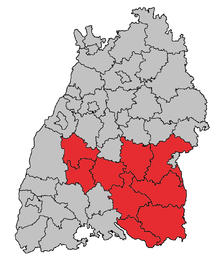 Members of the association (red)

The Zweckverband Oberschwäbische Elektrizitätswerke has the following members today: