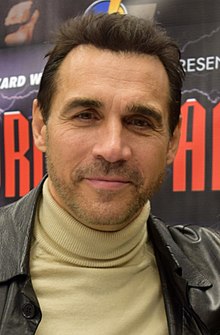 Paul was born in London , the first of three children . He grew up bilingual - his mother is Italian - and quickly developed his passion for languages ​​and travel. On his travels through Europe , where he worked as a dancer and choreographer , he learned French and Spanish in addition to his two mother tongues. Paul studied various martial arts for a total of seven years, including Kung Fu, Tae-Kwon-Do and boxing; he also completed extensive sword training with the Japanese katana .

In 1985 Paul left Europe to try his luck as a dancer and model in the USA. Although he had gotten a taste of the theater as a child in some school performances, he never wanted to become an actor. When he finally moved to Los Angeles , he eventually attended a few auditions and finally got his first role in the ABC series The Colbys - The Empire , an offshoot of the hit series The Denver Clan in which he played the Russian ballet dancer Kolya . This was followed by a role in the Broadway -Stück Bouncers ; Over time, Adrian got smaller and bigger roles in series like War of the Worlds and Dark Shadows . In the cinema he starred alongside Tom Berenger in Last Rites , in the remake of The Mask of the Red Death , Love Potion No.9 and other films.

The production that has brought him the greatest fame so far is the television series Highlander , in which he played the role of the immortal Duncan MacLeod over six seasons. The series ran from 1992 to 1998 and had 119 episodes. In 2000, the fourth part of the underlying cinema series, Highlander: Endgame, hit the screens, in which Adrian Paul played the leading role alongside Christopher Lambert .

Since then, apart from a fifth part of the Highlander saga, he has appeared in various horror films, such as B. Seance, Lost Colony and Dark Species - The Others.

Outside of his film career, Adrian Paul founded the PEACE (Protect, Educate and Aid Children Everywhere) foundation, a foundation for helping sick, abused and needy children.

Paul currently runs a commercial sword fighting academy called The Sword Experience Company. In tour events organized around the world, the participants can learn to use swords together with Adrian Paul and recreate choreographies from the Highlander films and the series. In Ahrensburg, Germany, tickets for these workshops have been sold for between 700 and 950 euros.