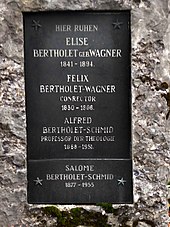 Grave in the Wolfgottesacker cemetery , Basel

Bertholet studied Protestant theology at the universities of Basel , Strasbourg and Berlin and was licensed in 1895. During his studies, he became a member of the Swiss Zofinger Association . He completed his habilitation in 1896 and became an associate professor in 1899 and a full professor in Basel in 1905 . This was followed by work in Tübingen (1913), Göttingen (1914) and Berlin (1928), where he was released in 1936. After the Second World War , Bertholet returned to Switzerland and from 1948 worked as a permanent guest lecturer at the theological faculty in Basel.

Bertholet's teacher Bernhard Duhm had a strong influence on his work. Alfred Bertholet published strictly scientific as well as popularizing works in his specialist areas “ Old Testament ” and “ History of Religion ”. With the "Kulturgeschichte Israels" published in 1919, he worked up Old Testament research from a different perspective and this was freed from the one-sided influence of archeology . Bertholet also worked on several compilations , which attracted a lot of attention in his time.

He was editor of the reading book for the history of religion , co-editor of the second edition of the lexicon series Religion in Past and Present and editor of the fourth edition of Pierre Daniel Chantepie de la Saussaye's textbook on the history of religion (1925). When the plan arose in the 1930s to publish a dictionary of religions in Kröner's pocket edition , Bertholet took on this task. The manuscript was available in autumn 1941, but was lost in 1944 due to the effects of the war. Bertholet reconstructed it based on his notes, but did not live to see the publication of the work in 1952.