from Wikipedia, the free encyclopedia
This is the spotted version , flagged on June 28, 2020 . There is 1 pending change that has yet to be viewed.

The Assindia Cardinals are a German American football team from Essen ( North Rhine-Westphalia ) that played various seasons in the highest German football league, the GFL . The name Assindia Cardinals is made up of a Latin name for the city of Essen ( Assindia ) and the cardinal ( Cardinal ). The team's logo shows a cardinal bird against a yellow background.

The Assindia Cardinals were founded on June 26, 1983. The men's team, which started in the 3rd division in 1984, rose directly to the top two years in a row and remained in the 1st Bundesliga, today's GFL, until 1990 .

After three years of membership in the House of Lords, they only ended up in last place in the 2003 season . The relegation games against the Düsseldorf Panthers were lost. After relegation there was a move from the Georg Melches Stadium to the Am Hallo sports park . After only one year in the 2nd Bundesliga, 2004 saw a further relegation to the Regionalliga West, in which the Cardinals played in 2005. At the 2005 World Games , Martin and Albert Falkowski, two Cardinals players, were in the German national team .

In the 2005 season, the senior team managed to return directly to GFL 2 North. Both relegation games against the competitor, the Red Cocks from Frankfurt (Oder) , were clearly won with 27: 0 and 12: 0 respectively. In 2006 , however, the Cardinals only finished 7th and were relegated back to the regional league. After the direct return to GFL 2 Nord, they even managed to march through in the 2008 season . The Cardinals finished first in GFL 2 Nord and crowned the season by being promoted to the GFL with two wins (24:17, 28:23) in the relegation against the Cologne Falcons . For this achievement, the team was nominated for the “Versatel Night of Sports 2008” (athlete's choice of the city of Essen) in the “Team of the Year” category and trainer Bernd Janzen in the “Trainer of the Year” category. On November 22nd, the team actually received the “Team of the Year 2008” award.

The Cardinals have been competing in GFL 2 North since 2012. 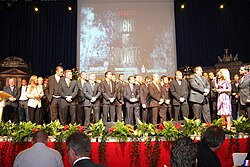 Team at the Versatel Night of Sports 2008

With the 6-100 defeat in 1989 and the 0-102 defeat in 1990 against the Berlin Adler , the Cardinals belong to their group of teams, alongside the Ratingen Raiders and the Hilden Hurricanes , which had a three-digit result in the top division.

In addition to the first team, the Assindia Cardinals run several youth tackle teams. There are tackle teams from A to D youth. In addition, various squads of cheerleaders and a flag football team belong to the club.

In 1998 the Assindia Cardinals tackle youth team was reformed by the former players of the men's team, Andreas Doehring, Klaus Meyer and Marcus Wolf. They initially played in a syndicate with the Dortmund Giants youth team until 2000 .

In 2001 the syndicate was dissolved and the Cardinals initially played in the expansion league. After promotion, the youth managed to stay in the youth performance league throughout and they became NRW champions in 2003.

In 2004 and 2005 the team played under the leadership of Andreas Doehring as head coach in the GFL-J (highest class in youth tackle football). Due to a quotient regulation, the juniors were relegated to the performance league in 2005.

In 2006, head coach Andreas Doehring resigned and the defense coordinator in Doehring's team, Michael Tiedge, took over the post of head coach. In the same year he led the tackle youth back to the NRW championship title. After winning the relegation games against the Hessen champions Wiesbaden Phantoms and against the last of the GFL-J Mitte, the Darmstadt Diamonds , the team rose again to the youth league (GFL-J).

In 2010 the Juniors play in the NRW Youth Region League (2nd league). After two defeats at the beginning, they won their third game with the Troisdorf Jets .

The youth team has also provided some successful players for the youth national team, such as B. Tobias Lemke, Tim Schmölzer, Tim Baumers, Nils Foege and Markus Patschke.

The flag football department of the Men in Blue (MIB for short) was founded in 1999. From the beginning, the Cardinal Flags have been one of the most successful teams in North Rhine-Westphalia. In the all-time table of the NRW Flag League, the Cardinals are in 3rd place. There has been a final for the NRW Championship since 2005. In 2006 the NRW FlagBowl took place in Essen. In this context, there was even a semi-final for the first time. The two best from both groups played. Led by their quarterback Marvin Merten, the flags of the Assindia Cardinals played their most successful season to date in 2006. With a score of 439: 6, the unbeaten Cardinals Flags achieved a “perfect season” and also won the NRW semifinals against the Thunderbirds 17: 0. In the final you had to admit defeat to the future German champions from Düsseldorf. In 2009 the Flaggies played their last season and finished in 4th place. In 2012, the Cardinals flag team formed under the name Fire Birds and played for the first time in 2013 in the DFFL League West.

Teams of the German Football League 2 2020