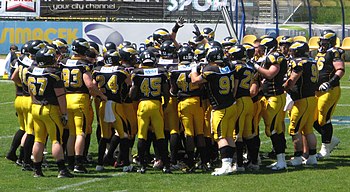 The Berlin Adler at the Eurobowl XXIV in Vienna

The Berlin Adler are an American football club that plays in the 2nd German Football League (GFL2).

In 1979 the team was founded under the name Berlin Bären at the time and took part in the American Football Bundesliga that same year . This made the Berliners one of the six founding teams. Two years later, the bears joined the BSC Wilmersdorf and changed their name to Berlin Adler. In the 1983 season, the Adler qualified for the play-offs for the first time , but failed in the quarter-finals at the reigning champions Ansbach Grizzlies . A year later, the Adler finished with a winning season for the first time and recorded their first play-off victory. In the semifinals they were then defeated by the reigning champions Düsseldorf Panther .

Between the 1986 season and the 1993 season , the Berlin Eagles were one of the dominant teams in the first Bundesliga. In these years they managed a perfect season three times (1987, 1989 and 1990) and a record of 96 wins with only six defeats and two draws in the regular season. In total, the German Bowl was reached five times and won four times during this time. The quarterback at that time was Clifford Madison and the venue was the Radrennbahn Schöneberg . After 1994 the Adler lost touch with the top teams and in 1997 had to relegate from the Bundesliga.

In 2000 the Adler founded the AFC Berlin Adler e. V. and thus made themselves independent. After three years in the second Bundesliga , the Adler 2001 championship in the second Bundesliga North. In the relegation, however, the Berlin Eagles failed due to the Kiel Baltic Hurricanes and thus did not make the athletic promotion. With the withdrawal of the Düsseldorf Panthers from the GFL, a place in the GFL (Bundesliga) became available, which the Berlin Eagles received and thus became first class again.

In the 2004 season , the Adler became German champions for the fifth time with a 10: 7 against the Braunschweig Lions in the German Bowl . In the 2005 season, the previous head coach Kent Anderson moved to Braunschweig. With his successor Pat Donohoe, the play-offs succeeded again, but the Eagles were defeated there by the Marburg Mercenaries in the quarter-finals .

In the 2006 season they reached fifth place after another coaching change under Dogan Özdincer. In March 2006, the Adler made headlines across Germany when they wanted the former soccer referee Robert Hoyzer to play in their team. The American Football Association Germany saw no possibility of issuing him a player pass, as his admission to the club was not legally valid.

In the 2007 season , the Adler reached the play-offs semi-finals for the German Bowl, in which, however, they were subject to the Stuttgart Scorpions . In 2008 the Berlin Eagles also started in the EFAF Cup , on the way to the finals the Amsterdam Crusaders , the Triangle Razorbacks and the Prague Panthers were defeated in the semifinals. The final, which took place in Berlin's Friedrich-Ludwig-Jahnstadion, which has since become the home ground of the Berlin Adler, was won by the Berlin Adler at 29:00 against the Parma Panthers from Italy. By winning the EFAF Cup, the Berlin Adler won their first international title in their club's history. The GFL season 2008 ended after a third place in the group north with a 17:12 defeat in the semi-finals at the Kiel Baltic Hurricanes .

In 2009 the Adler celebrated their 30th anniversary. The club parted ways with Dogan Özdincer and signed Shuan Fatah as the new head coach. Fatah previously worked at Berlin Thunder (formerly NFL Europe ) and Hamburg Sea Devils (formerly NFL Europe) before taking over the sporting management of the Dresden Monarchs in 2008.

In 2009 the Adler youth division won the German Junior Bowl against the Cologne Falcons with 21:14 and secured the fifth championship.

In 2010 the Berlin Adler achieved the greatest success in their club's history: After away games that were exhausting for all active players and nerve-wracking for the fans, they ultimately won the Eurobowl. With the music box running out, Benjamin Scharweit transformed a 52-yard field goal to a 34:31 victory over Raiffeisen Vikings Vienna. The national championship title, however, could not be defended after the Kiel Baltic Hurricanes had to admit defeat in the German Bowl XXXII in the new edition of the 2009 final.

In 2011 the Adler reached 4th place in the GFL and were eliminated in the play-offs of the German championship in the quarter-finals with a 53:27 against the Schwäbisch Hall Unicorns , who also became German champions this season. In the European Football League , the Berlin Adler was once again the only German team to make it into the play-offs. After the victories in the quarter and semi-finals, however, they lost in the Eurobowl XXV against the Swarco Raiders Tirol with 27:12.

In the 2012 season the Berlin Adler made it to 2nd place in the final table of the GFL Nord. After a victory in the quarter-finals of the play-offs against the Marburg Mercenaries, the Adler were eliminated in the semifinals again against the Schwäbisch Hall Unicorns. In the play-offs of the European Football League, the Berlin Eagles were also eliminated in the semi-finals.

In 2013 the Berlin Adler took 4th place in the final table of the GFL-Nord. In the quarter-finals of the German championship, they met the reigning German champion and first place in the GFL-Süd, the Schwäbisch Hall Unicorns. With a clear 42:13 victory, the Eagles were able to reach the semi-finals again, where they were eliminated against the Dresden Monarchs. In the European Football League, the Eagles also made it back to the semi-finals, where they lost 17:41 to Raiffeisen Vikings Vienna. A year later, the Eagles reached the final of the newly created Big6 European Football League and secured their second Eurobowl title there.

In the following years, the Berlin Adler fought relegation in the GFL and then relegated to GFL2 at the end of the 2017 season and for the first time to the third-class Regionalliga North / East in the following season.

The 2019 season ended as first in the table, so the Berlin Adler will play in the second-rate GFL2 again in the 2020 season .

In addition to the men's team, the Berlin Eagles have a youth team, a women's team (until 2004), a flag team and, since November 2006, a Bambini flag team. In autumn 2007 a youth prep team (youth tackle) was founded.

Since the 2018 season, the Berlin Eagles have had cheer & dance teams again.

The men's team is currently playing in GFL2 North. 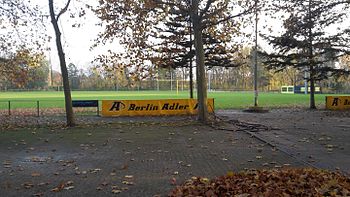 In 1987 the Berlin Adler team recorded a record entitled Berlin Eagles with Billy Brooks and the cheerleaders . Information on possible chart placements is not available. In 2003 the Berlin Adler and their then head coach Kent Anderson were protagonists of the 2006 documentary Weekend Warriors by Alexa Oona Schulz.

Teams of the German Football League 2 2020